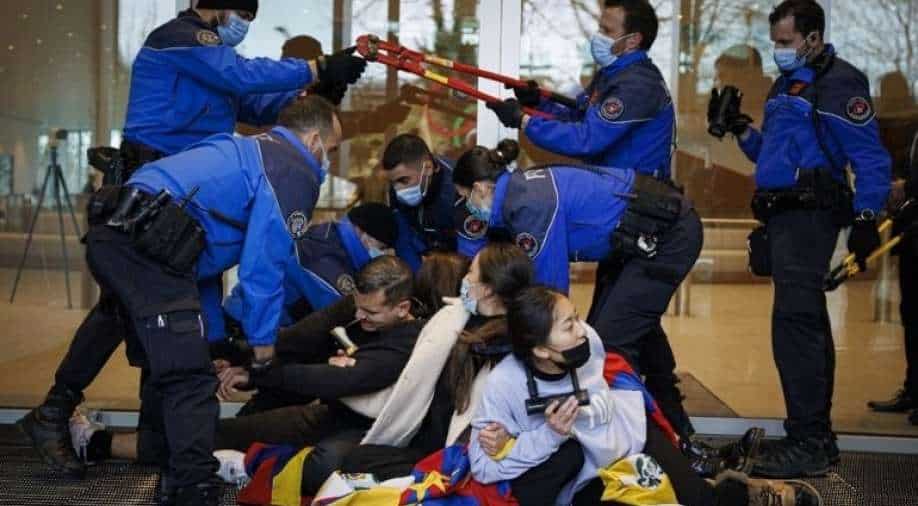 China seized control of Tibet after its troops entered the region in 1950 in what it calls a "peaceful liberation". Critics, led by exiled spiritual leader the Dalai Lama, say Beijing's rule amounts to "cultural genocide".

Two Tibetan students chained themselves to the Olympic rings outside the Swiss headquarters of the International Olympic Committee on Saturday to call for an international boycott of next year's winter games.

The pair were part of the latest protest against the 2022 Olympic Games over Beijing's abuse of human rights and its treatment of minorities.

The United States will not send government officials to the 2022 Winter Olympics due to China's human rights "atrocities," it said earlier this month.

Members of the Tibetan Youth Association in Europe (TYAE) and Students for a Free Tibet held a sit-in at the IOC building in Lausanne as officials gathered for a meeting.

The activists demanded countries withdraw from the event they have called the "Genocide Games", which they say are being used to burnish China's reputation.

China seized control of Tibet after its troops entered the region in 1950 in what it calls a "peaceful liberation". Tibet has since become one of the most restricted areas in the country. Critics, led by exiled spiritual leader the Dalai Lama, say Beijing's rule amounts to "cultural genocide".

Two activists unfurled a banner over the entry to the building reading, "No Beijing 2022," while five students got inside the building and held a sit-in protest.

"Despite mounting international criticism of the IOC and China, the Chinese regime`s human rights abuses in Tibet, East Turkestan, and Hong Kong continue unabated," said Tenzing Dhokhar, Campaigns Director of TYAE, one of the protesters.

"By collaborating with China, the IOC is making itself an accomplice of the Chinese Communist Party`s crimes, which will be sports-washed by the Beijing Olympics."

Police started removing the campaigners after three hours of protests. Organisers and a Reuters eyewitness described the protest as peaceful, but the IOC said one of its security guards was injured.

"The IOC always listens to all concerns that are directly related to the Olympic Games. We have engaged multiple times with peaceful protesters and explained our position, but we will not engage with violent protesters who used force to enter the IOC building and injured a security guard by doing so," the IOC said in a statement.

The organisation has previously said it is a force for good and cannot have any influence over sovereign states.

Chinese authorities have been accused of facilitating forced labour by detaining around a million Uyghurs and other primarily Muslim minorities in camps since 2016.