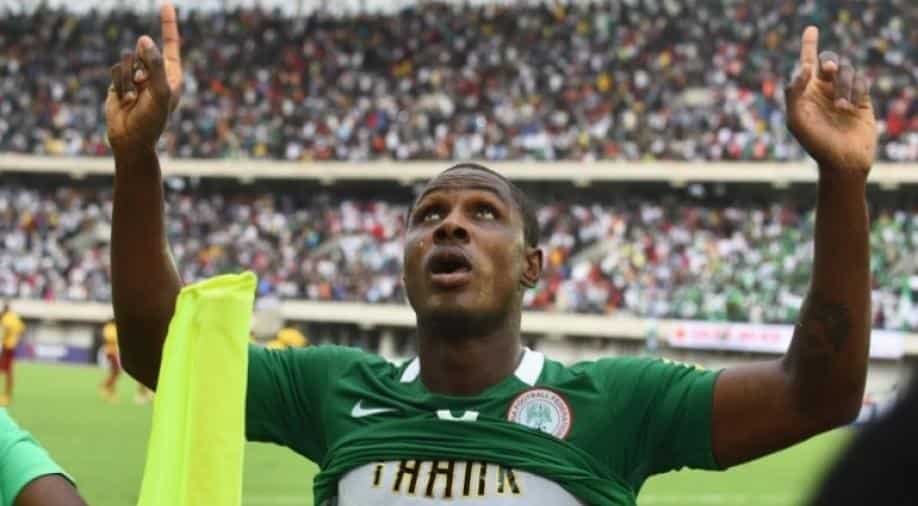 China-based Ighalo bagged a matchday 3 treble as Nigeria crushed Libya 4-0 in Uyo to continue a Group E recovery after starting with a shock home defeat by South Africa.

China-based Ighalo bagged a matchday 3 treble as Nigeria crushed Libya 4-0 in Uyo to continue a Group E recovery after starting with a shock home defeat by South Africa.

Fajr converted a penalty seven minutes into stoppage time as Morocco sneaked a 1-0 Group B win in Casablanca over the Comoros, ranked 104 places below them in the world.

Captain Musona scored and was sent off within five minutes as Zimbabwe went clear in Group G thanks to an upset 2-1 victory over the Democratic Republic of Congo in Kinshasa.

There was also a record six-goal victory for South Africa and a goalkeeping howler that gifted Namibia three points in Mozambique as the third series of qualifiers was completed.

Ighalo converted a fourth-minute spot-kick after being fouled and rounded goalkeeper Mohamed Nashnush to tap in and double the lead on 58 minutes.

When a Libyan failed to cut off a low cross, former Watford striker Ighaloscrambled the ball into the net to complete his hat-trick with a quarter of the qualifier remaining.

A last-minute Samuel Kalu goal completed the rout of the 'Mediterranean Knights', whose Belgian coach Adel Amrouche quit this week over unpaid salaries.

Nigeria lie second with six points, one less than South Africa, who scored a record 6-0 win over the Seychelles in rain-lashed Johannesburg.

Goalkeeper Romeo Barra prevented an even more embarrassing scoreline for the Indian Ocean islanders as South Africa bettered the five goals they netted against Guatemala in 2010.

Lebo Mothiba, who has been in sparkling French Ligue 1 form, was among the scorers and set up a goal for Percy Tau with a brilliant back-heel.

Another Indian Ocean island state, the Comoros, were on the verge of their greatest achievement as they frustrated 2018 World Cup qualifiers Morocco for 96 minutes.

But then came heartbreak for the visitors as they conceded a penalty and Fajr scored to lift Morocco within a point of Group B pacesetters Cameroon.

Ronald Pfumbidzai struck a superb goal midway through the first half to put Zimbabwe on the road to glory at a packed 80,000-seat Stade des Martyrs.

Musona doubled the lead and then cynically fouled Issama Mpeko for which he got his second yellow card of the match followed by a red.

Yannick Bolasie nodded a stoppage-time consolation goal for the Congolese as they suffered a rare loss in their Kinshasa fortress.

Mozambique goalkeeper Jose Guirrugo allowed a long-range, stoppage-time shot from substitute Deon Hotto slip from his grasp and into the net as Namibia fought back to win 2-1 in Maputo.

Group K is the tightest of the 12 mini-leagues with Guinea-Bissau, Mozambique, Namibia and Zambia all on four points with equal goal differences.

Leaders Tunisia battled to a 1-0 Group J win in Rades over Niger, who conceded six goals in Egypt last month amid complaints of a "beans-and-water" diet.

Yassine Meriah scored after 17 minutes for the 'Carthage Eagles', who had Ghailene Chaalali red-carded in the closing stages.