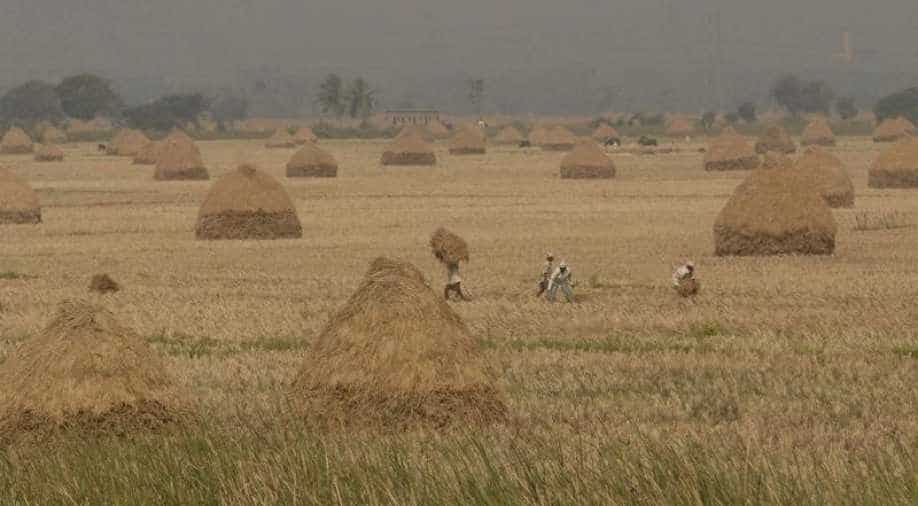 Advocates of the land pooling system say it is a win-win for India as business projects are completed faster. In photo: Farmers work in their paddy fields in Andhra Pradesh Photograph:( Reuters )

States across India are bypassing land acquisition laws by introducing land pooling schemes to speed up industrial and development projects, a move that activists say leaves farmers and the environment vulnerable.

Land pooling enables the quick consolidation of small land holdings. Land owners get back a share of developed land, while the state keeps the remainder for its use.

It is different from the federal Land Acquisition Act of 2013, which requires consensus to buy the land, a social impact assessment, rehabilitation for those displaced and compensation of up to four times the market value.

But with no public consultations, owners may come under pressure from the community or the state to participate, activists said.

"It can be a fair and equitable system if there is a way to ensure there is no compulsion, and if a social impact assessment is done," said EAS Sarma, a land rights activist in Andhra Pradesh.

"Otherwise, the system offers few rights and protections to farmers and other vulnerable people who are affected," he said.

In Andhra Pradesh, the country's largest exercise in land pooling is under way to develop the new capital city Amaravati with 38,000 acres (15,378 hectares) of land.

About 35,000 acres have been committed since the scheme was unveiled early last year, officials said.

But most of the land is owned by wealthy landlords whose poor tenant farmers are being displaced, with no recourse to compensation under the pooling law, Sarma said.

Prime Minister Narendra Modi was forced to abandon a move to amend the federal land law last year to make it easier for companies to acquire land, after opposition from farmers.

States including Rajasthan, Gujarat and Andhra Pradesh have introduced their own laws that have diluted some of the federal law's clauses, such as the need for consensus and social impact assessment.

Other states are considering similar laws.

Land is increasingly sought in India for industrial use and development projects, as one of the world's fastest growing major economies expands.

Problems related to land acquisition accounted for at least 15 per cent of stalled projects in India, according to a report by investment firm Ambit Capital last year.

"The land pooling system is a win-win for everyone, as projects get done faster, owners are not forced to give up land, and the land also appreciates in value," he said.

With pooling, landowners voluntarily hand over their land to a government agency. The land is then developed with roads and water lines, and a portion of it is returned to the owners, who also gain from the elevated price of the land.

Advocates of the system say it is more equitable than the 2013 legislation that often sees protests, displacement of residents, delays and lengthy court battles.

"The scheme allows people to be partners in development, and it has proceeded at a much faster pace than if we had used the land acquisition act," said BL Chennakesava Rao, a director at the Capital Region Development Authority in Andhra Pradesh.

But as in the case of Amaravati — named after an ancient Buddhist site — there is no telling how the land is being acquired, and what impact the development may have, Sarma said.

"On the face of it, it looks fair because it is supposed to be voluntary," said Sarma.

"But there is little discussion, and little study, so people are largely unaware of what they are getting into," he said.