Following an influx of Indian immigrants to Uruguay at the turn of the century, cricket steadily returned to Montevideo. 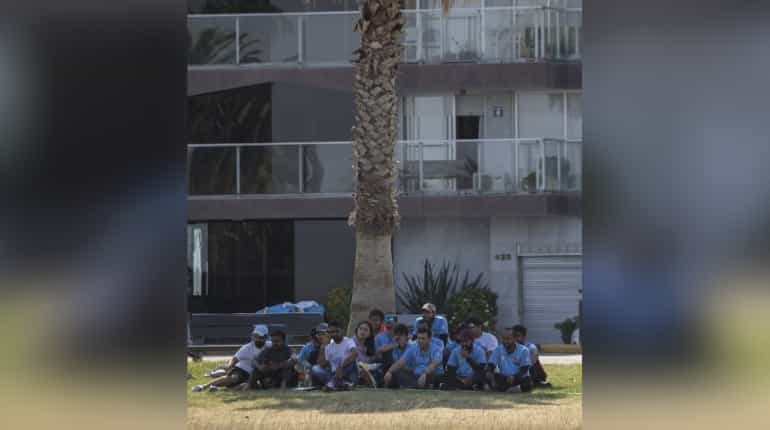 Every Sunday, close to a statue of Indian independence hero Mahatma Gandhi, a group of Indian ex-pats take over a patch of land in Uruguay's capital Montevideo for a game of cricket. 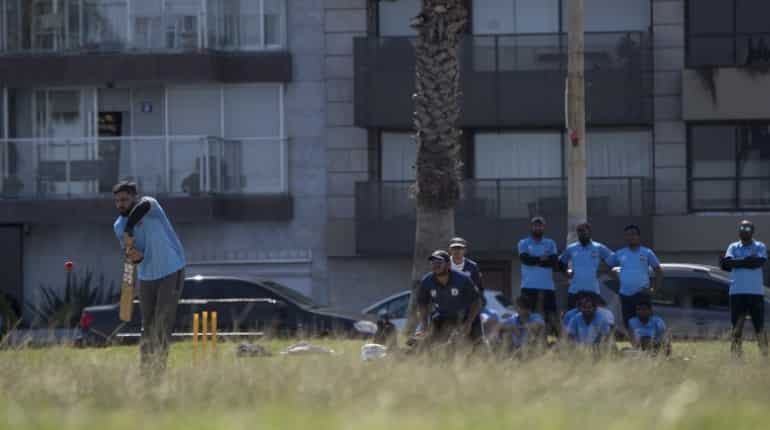 Tucked in between the Rio de la Plata estuary and the long promenade known as the "rambla" that stretches from one side of Montevideo to the other, Avijit Mukherjee prepares to bat, watched eagerly by his Uruguayan girlfriend.

"I played in my country but with a lot more infrastructure," said the 28-year-old Mukherjee, whose girlfriend Veronica is the main reason he has stayed in Uruguay.

"There are stadiums and many places to play in India, whereas here we only have one." 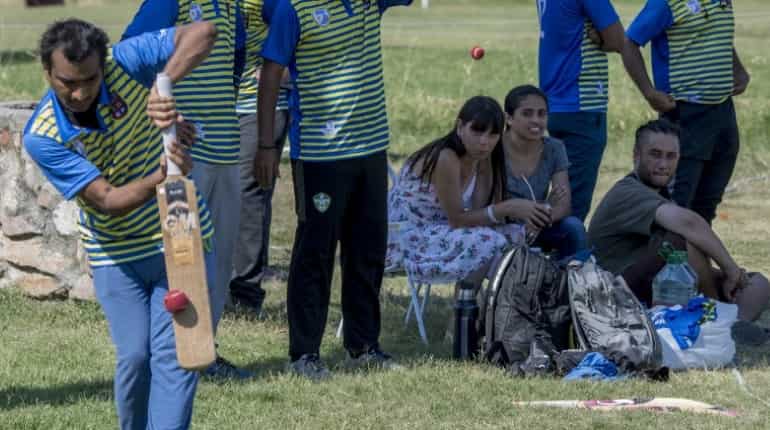 Although cricket was first played in Montevideo by British expat workers even before the foundation of the independent republic in 1828, its practice died out in the 1980s.

But following an influx of Indian immigrants to Uruguay at the turn of the century, cricket steadily returned to Montevideo. 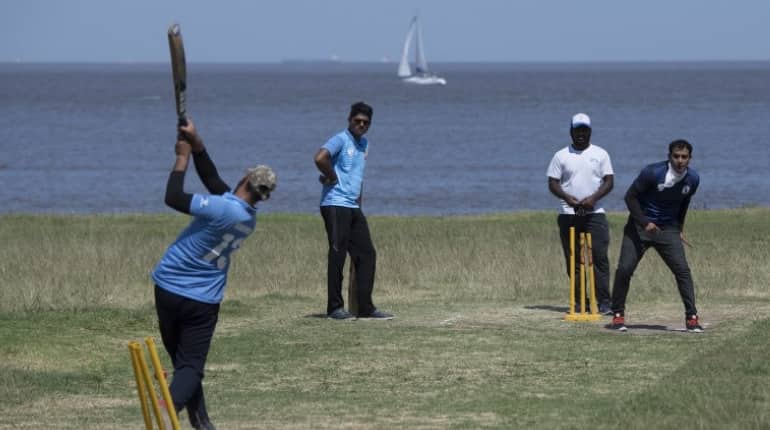 First there were one-off matches. Then, the players organised their own league and even set up a Uruguayan national team.

At the end of last year, Uruguay, whose team was made up almost entirely of Indian expats, finished second in the South American championships in Colombia. 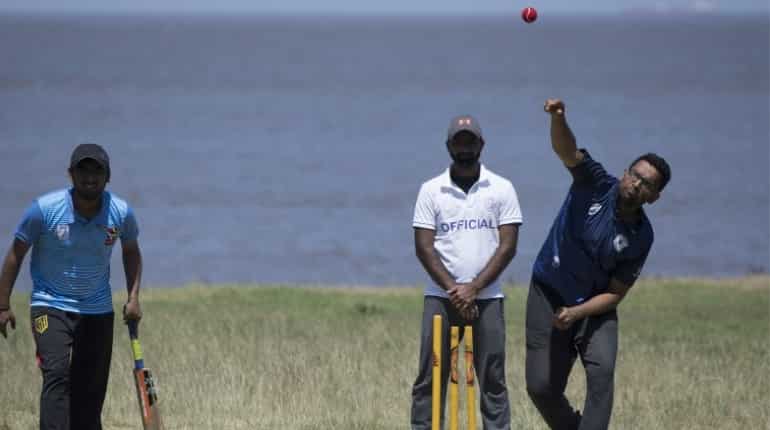 While the cricketers are now established on their little patch of land, their initial appearance was not entirely welcomed by local footballers playing on an adjacent pitch.

"We came like spiders and rebuked them," recalls Daniel Mosco, a local resident who has been playing football in that field for 30 years.

The issue was quickly resolved, though, and the cricketers agreed to start playing only once the football matches had finished.

With no fixed cricket markings, players use flour to draw white lines.

Now, bat can be heard crashing against ball until sunset. 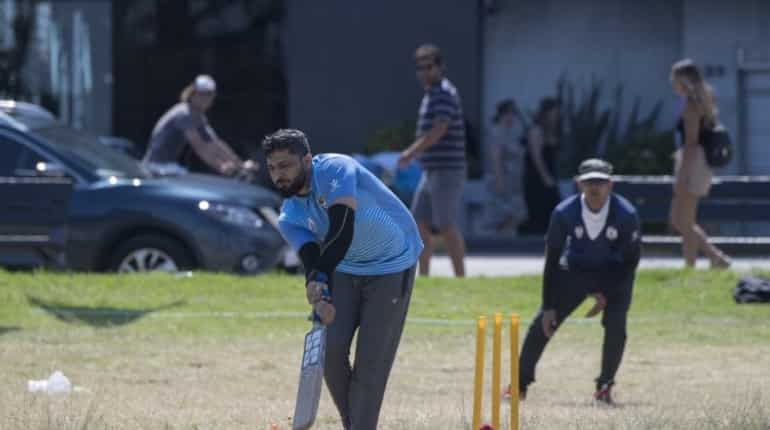 Even though they've been here for years, the shouts of "howzat!" and "wait on" still elicit glances from locals making their way along the rambla.

They make a curious spectacle for people little accustomed with either cricket or India.

Mosco, for one, was surprised that the players speak to each other in English.

And there's another surprise in the form of 29-year-old doctor Saied Muhammad Asif Raza: he's from Pakistan.

"Between the governments and in (professional) cricket there are always problems, but the people get on really well and within the team the are no problems whatsoever," said Asif.

He left his home town of Multan, 10 hours from Islamabad, at 19 and moved to Cuba thanks to a Fidel Castro scholarship.

After returning home, he found he couldn't readapt to his own culture.

"I didn't come here to find a better life economically, I had a better life in my country because in my family we didn't lack for anything," said Asif.

"The thing is that when you live many years away, nowhere is home, and cricket brings me close to it."

Although now at home on their small patch, finding something more permanent is crucial to Montevideo's cricketers.

"We have 120 players this year. On top of that we're starting some women's teams and for now we have 20 people interested. We also have plans for an under-15s league."

The solution may lie with Uruguay's most popular football team: Penarol. 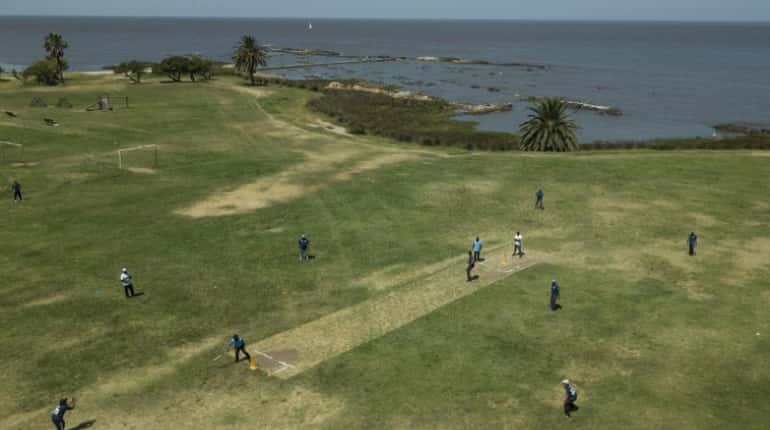 It was a multisport club -- but just over 20 years later, its football section broke off and was absorbed by a newly created team, Penarol.

The original club's cricket section disappeared as football became the main focus -- but it was relaunched a week ago.

And crucially, Penarol are planning to build a cricket pitch an hour outside Montevideo.

"When we raised the idea of cricket, there wasn't much to sort out; everyone was aware of what it meant to the history of the club, we just needed to work out how to make it happen," said Leonardo Vinas, who is heading up the project. 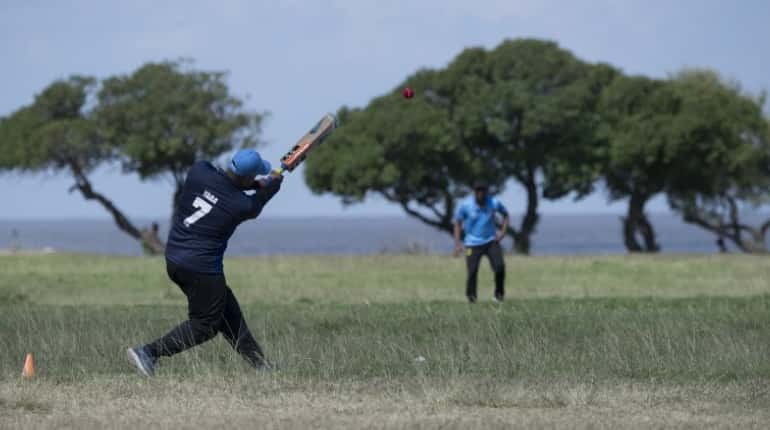 Will take time to spread interest in cricket

While many club members signed up to be involved, very few have ever played cricket.

Vinas says the project will take time, not just to spread interest in the sport, but also for the club's staff to get their heads around the rules of the game.

"Even now, we're still not clear about certain rules."