Celebratory gunfire resounded across Kabul on Tuesday as Taliban fighters took control of the airport before dawn, following the withdrawal of the last US troops 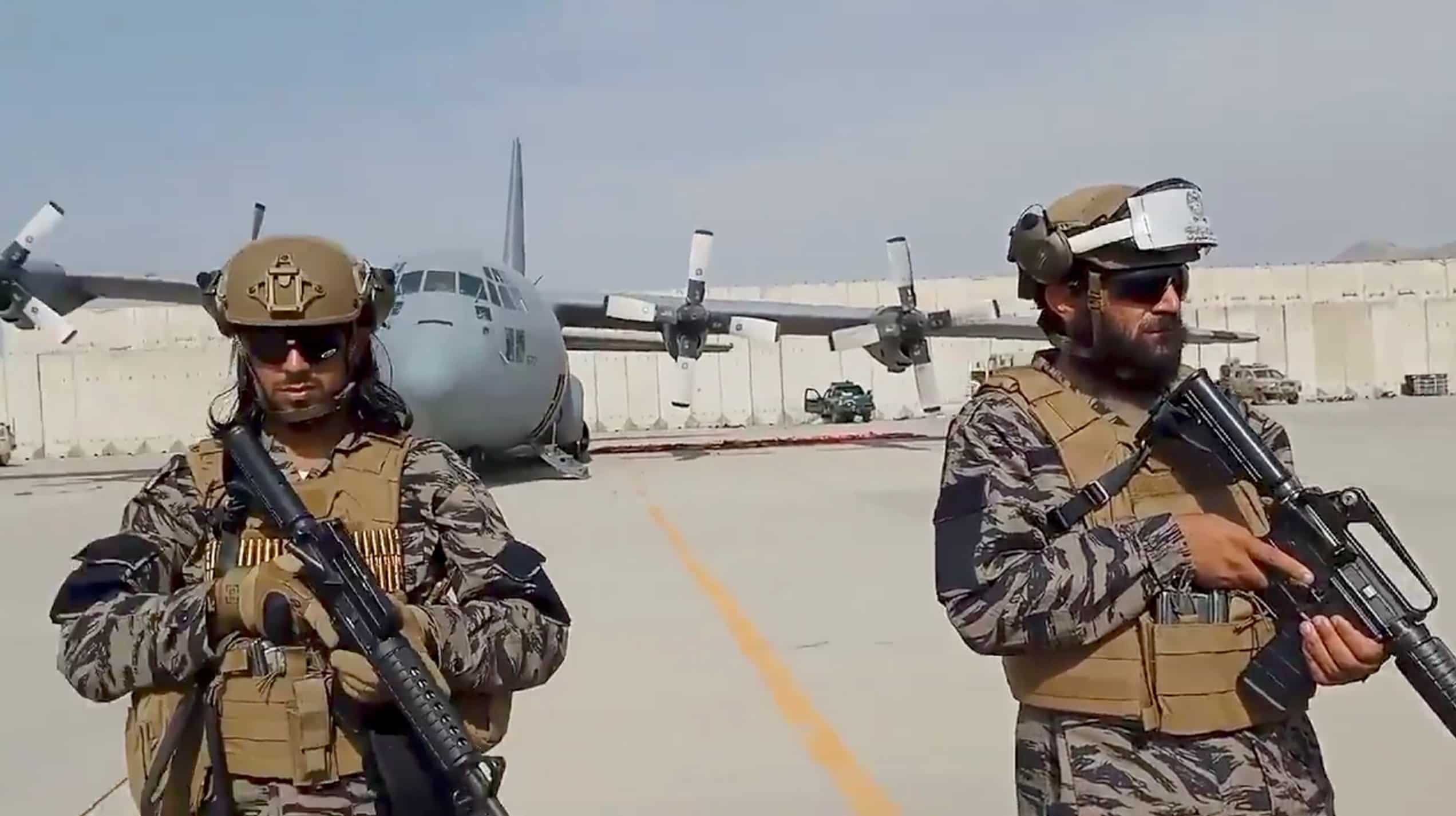 Celebratory gunfire resounded across Kabul on Tuesday as Taliban fighters took control of the airport before dawn, following the withdrawal of the last US troops, marking the end of a 20-year war that left the Islamist militia stronger than it was in 2001.

Shaky video footage distributed by the Taliban showed fighters entering the airport after the last US troops flew out on a C-17 aircraft a minute before midnight, ending a hasty and humiliating exit for Washington and its NATO allies.

Thousands of Afghans have already fled, fearing Taliban reprisals. More than 123,000 people were evacuated from Kabul in a massive but chaotic airlift by the United States and its allies over the past two weeks, but tens of thousands who helped Western nations during the war were left behind. 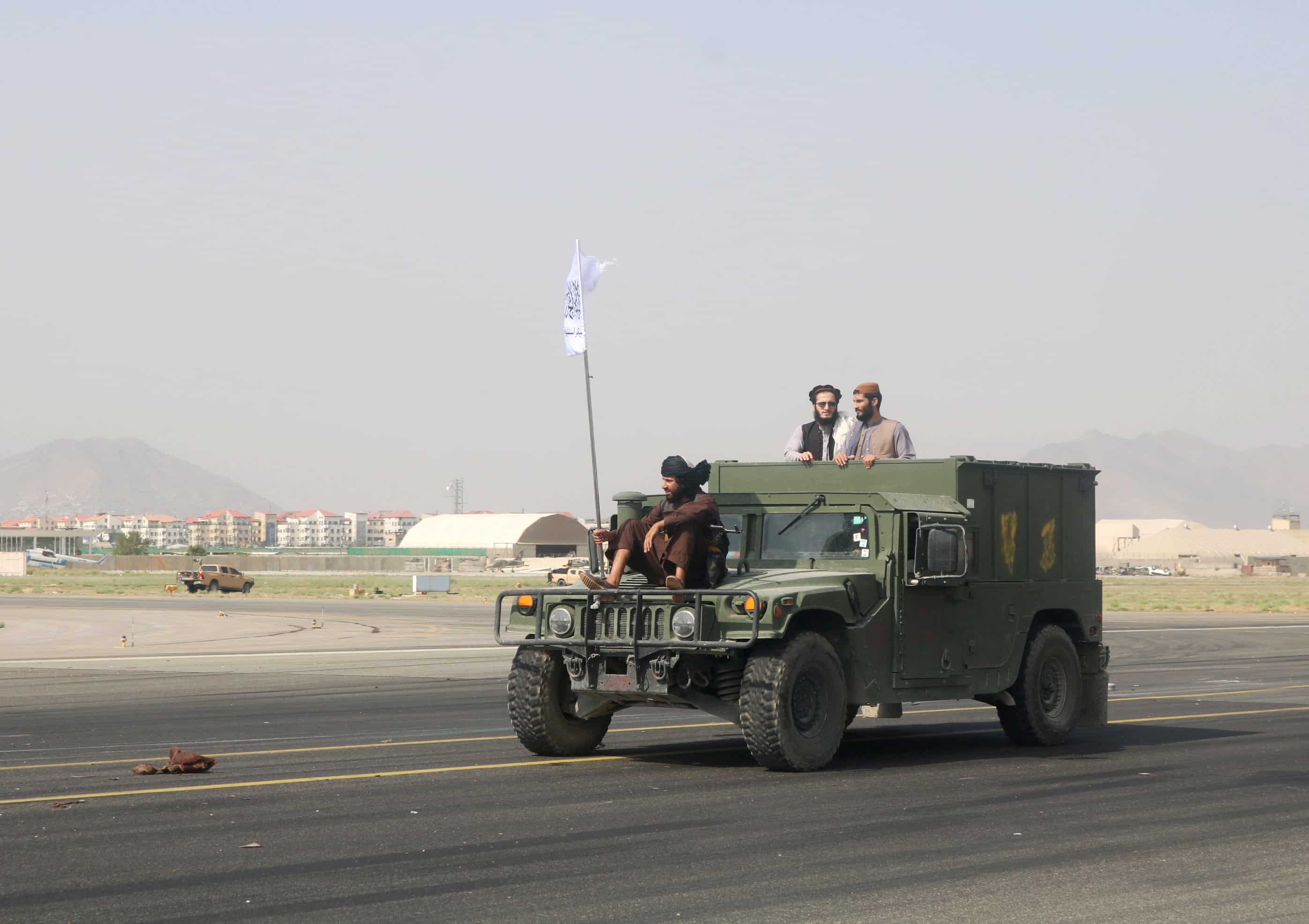 Taliban forces patrol at a runway after the US troops withdrawal from Hamid Karzai international airport in Kabul, Afghanistan.

A contingent of Americans, estimated by US Secretary of State Antony Blinken as fewer than 200, and possibly closer to 100, wanted to leave but were unable to get on the last flights.

Taliban spokesman Zabihullah Mujahid -- tipped to be minister of information when a new government is named -- led a group of officials onto the runway, his usual stoic expression replaced by a broad grin. 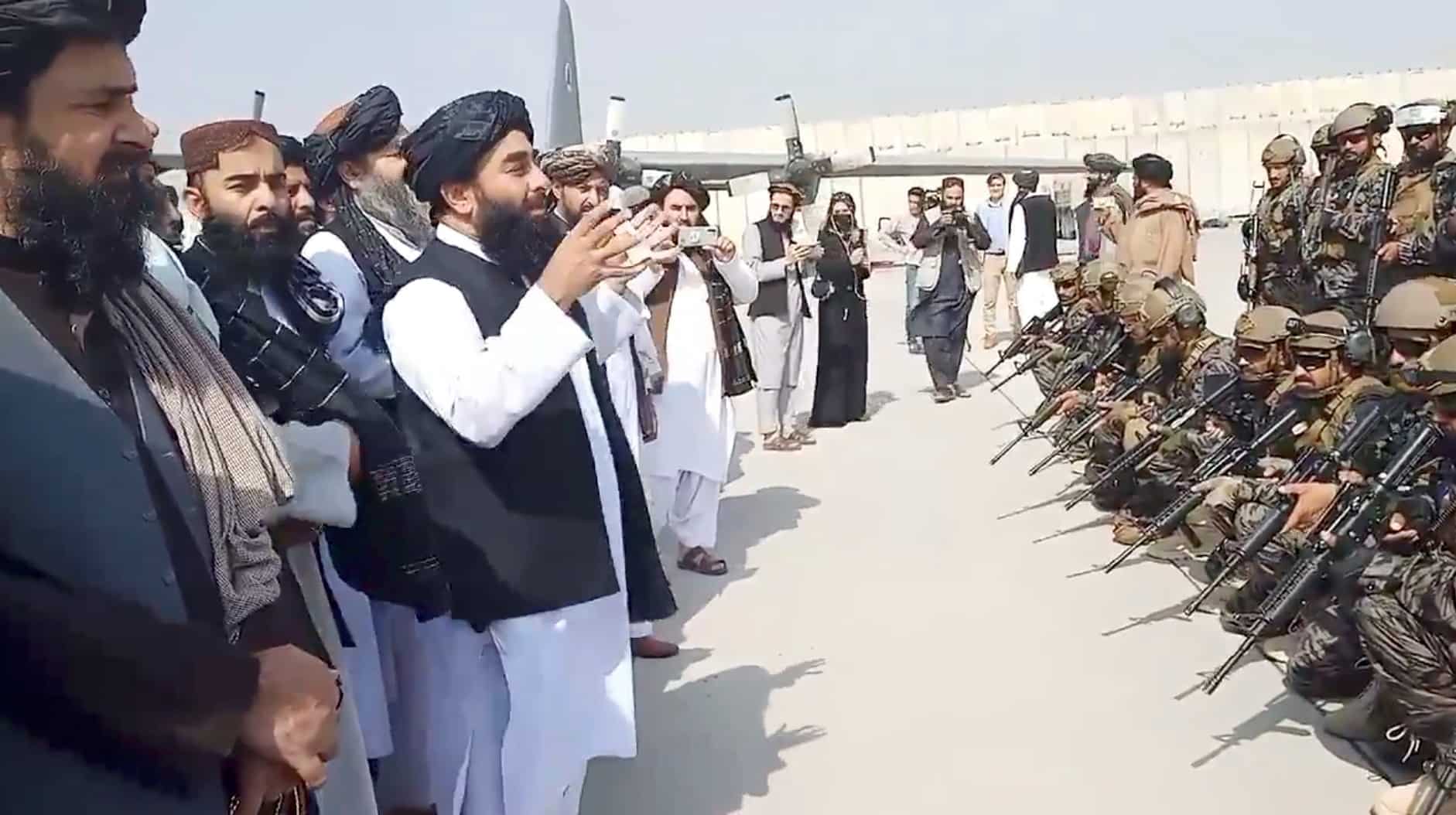 The atmosphere at Kabul airport was one of triumph and victory, but all around was evidence of the chaotic withdrawal of US troops after a 20-year occupation, and the hurried evacuation of more than 120,000 people fearful of the Taliban's return to power.

Once one of the most secure sites in Afghanistan, the airport's passenger terminal was trashed.

Dozens of vehicles in the carpark had been tipped onto their sides by US troops to form barriers against the tens of thousands of people who besieged the airport in the last two weeks in the hope of catching an evacuation flight out.

Doors and windows were broken and thousands of bullet casings littered the ground -- the result of shots being constantly fired into the air to control crowds. 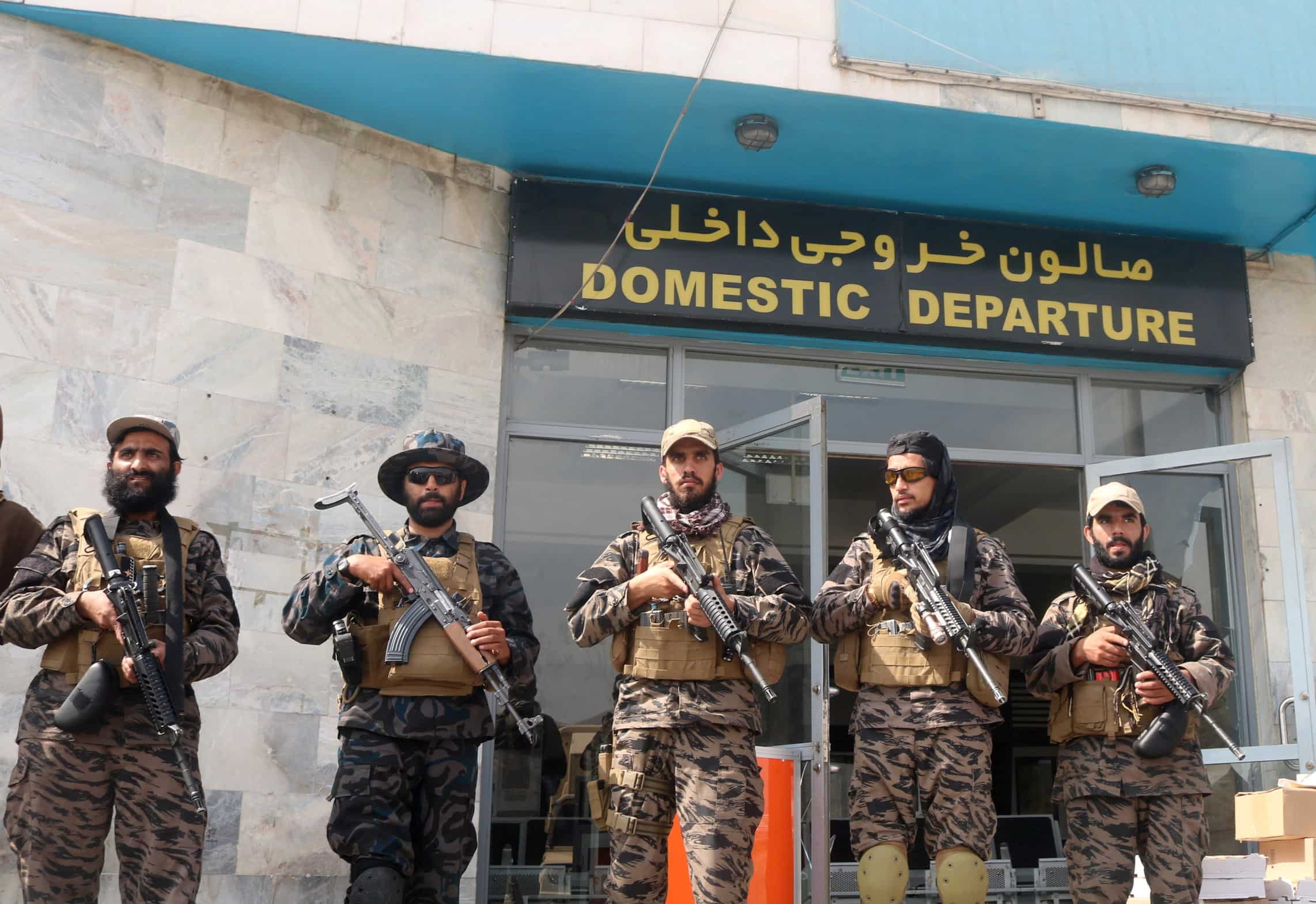 Taliban forces stand guard a day after the US troops withdrawal from Hamid Karzai international airport in Kabul, Afghanistan.

Hundreds of metres of razor wire snaked around, torn patches of clothing testimony to the desperation of those who tried to clamber through the airport.

Across the runway, on the military side of the facility, dozens of planes stood empty, wrecked by American forces in a final act before they flew away.

He said the Pentagon, which built up a force of nearly 6,000 troops to occupy and operate Kabul's airport when the airlift began on August 14, left behind around 70 MRAP armoured tactical vehicles which can cost up to $1 million a piece that it disabled before leaving, and 27 Humvees.

Before the last US troops left, they disabled scores of aircraft and armoured vehicles -- as well as a high-tech rocket defence system -- at the airport, a US general said.

Cockpit windows had been shattered, instrument panels smashed, and aircraft tyres shot out.

The US also left behind but disabled the C-RAM system -- counter rocket, artillery, and mortar -- that was used to protect the airport from rocket attacks.

The system helped fend off a five-rocket barrage from the jihadist Islamic State group on Monday.

Surveying the damage, Mujahid admitted it would take time to get the airport back up and running again.

Behind him, a truck carrying Taliban fighters raced at high speed along the runway. Suddenly it swerved and rolled three or four times, spilling bodies onto the runway.

Mujahid gave it no more than a second glance. 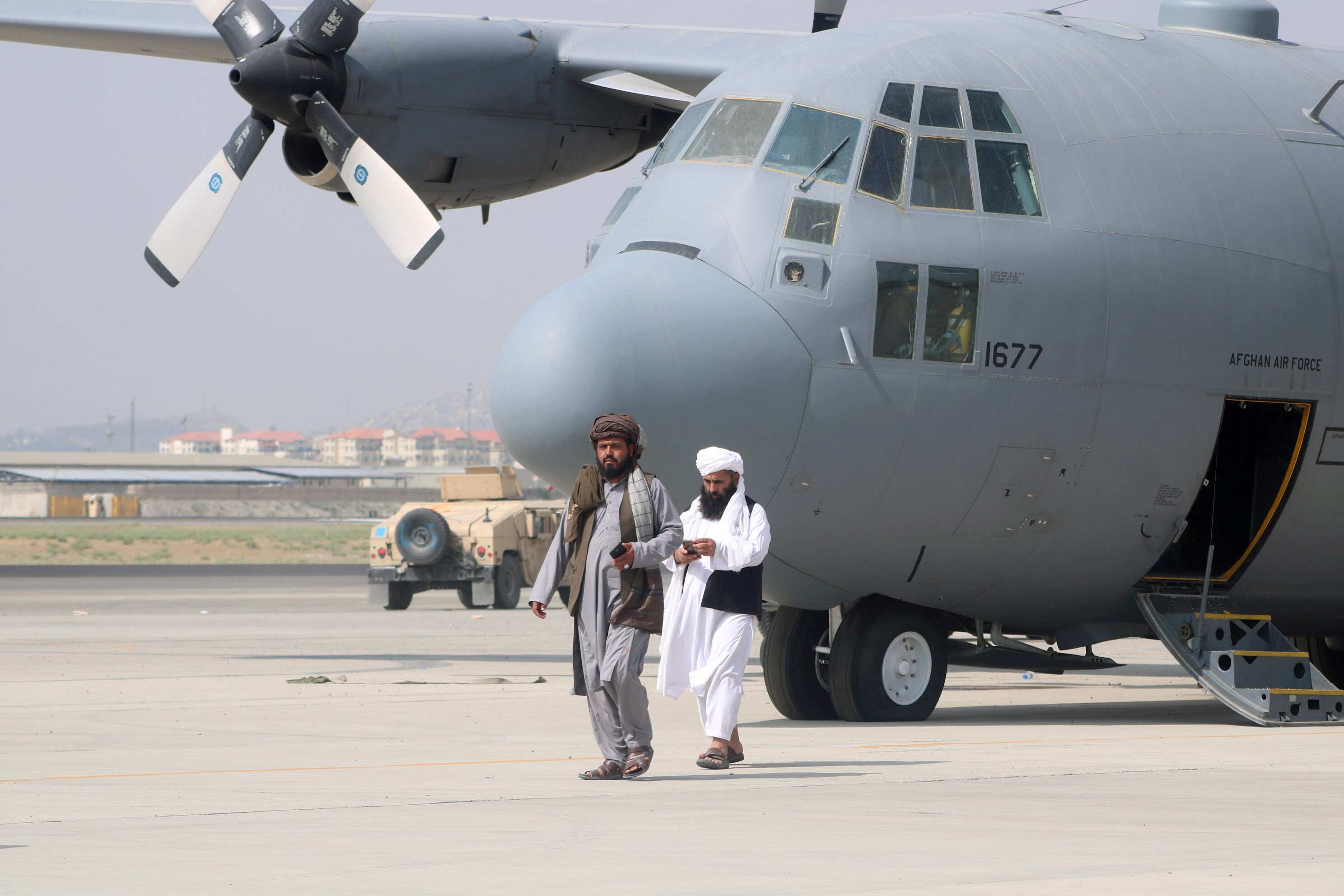 Taliban leaders walk in front of a military airplane a day after the US troops withdrew from Hamid Karzai international airport in Kabul, Afghanistan.

The United States had taken control of the airport to manage the evacuation of tens of thousands of people with help from other countries, coming under attack by the ISIS-K.

Turkey had offered to run security following the withdrawal of foreign troops, but the Taliban repeatedly said they would not accept any foreign military presence after August 31. 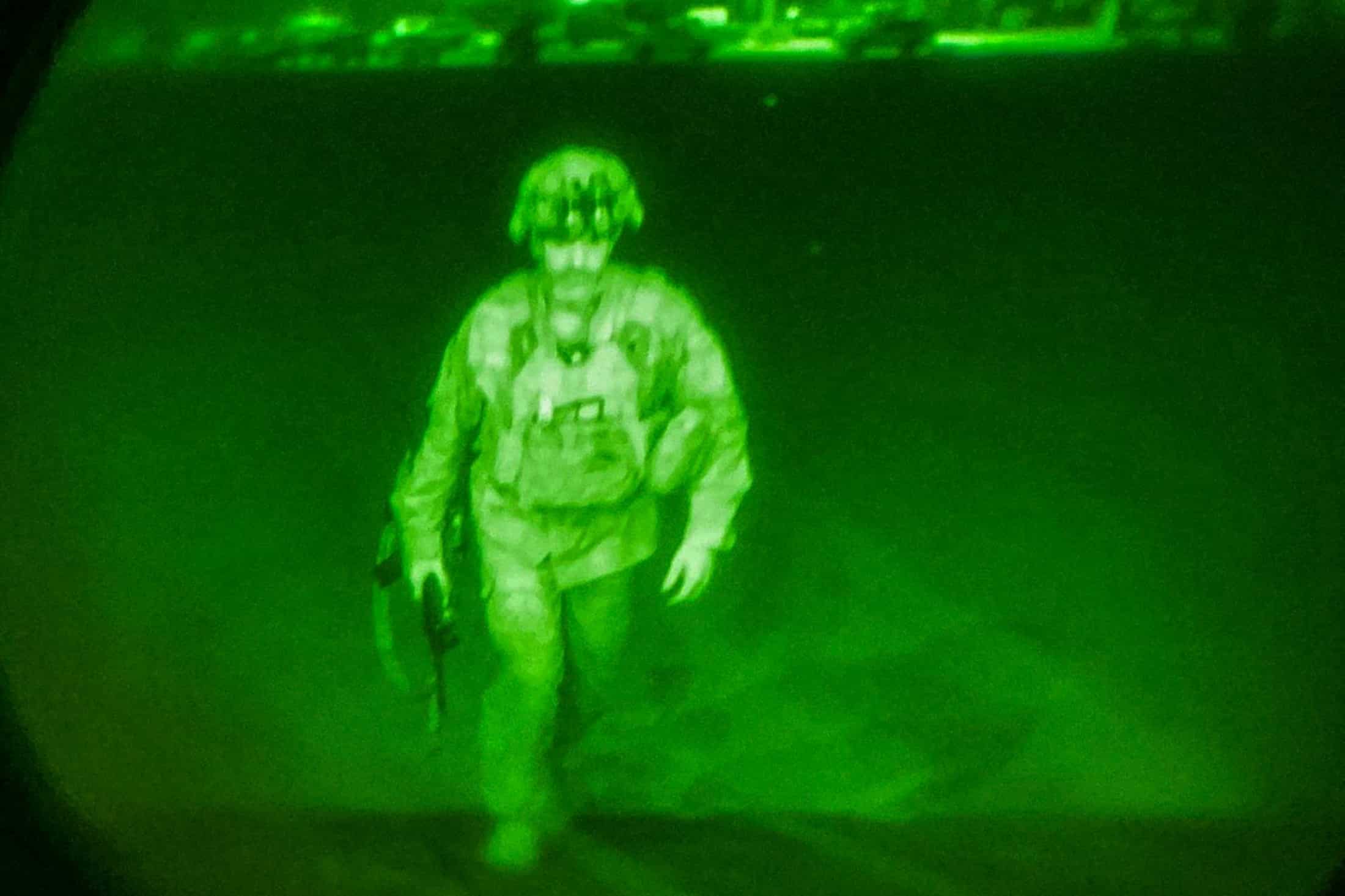 Major General Chris Donahue, commander of the US Army 82nd Airborne Division was the last soldier to leave Afghanistan in the C-17 cargo plane at the Hamid Karzai International Airport.

After the withdrawal was completed US General McKenzie said the American troops exited at exactly "1929 GMT Monday-just before the start of Tuesday in Kabul."

As far as the United States is concerned, State Department spokesman Ned Price said earlier that it was "essentially giving the airport back to the Afghan people."

Like with security, there were discussions with Turkey over running logistics.

President Recep Tayyip Erdogan said his country was still assessing the militant group's offer, but with the Taliban insisting on controlling security, Erdogan appeared to drop the idea.

"Let's say you took over the security but how would we explain to the world if another bloodbath takes place there?" he said.

Running and maintaining an airport is complex and requires expertise. 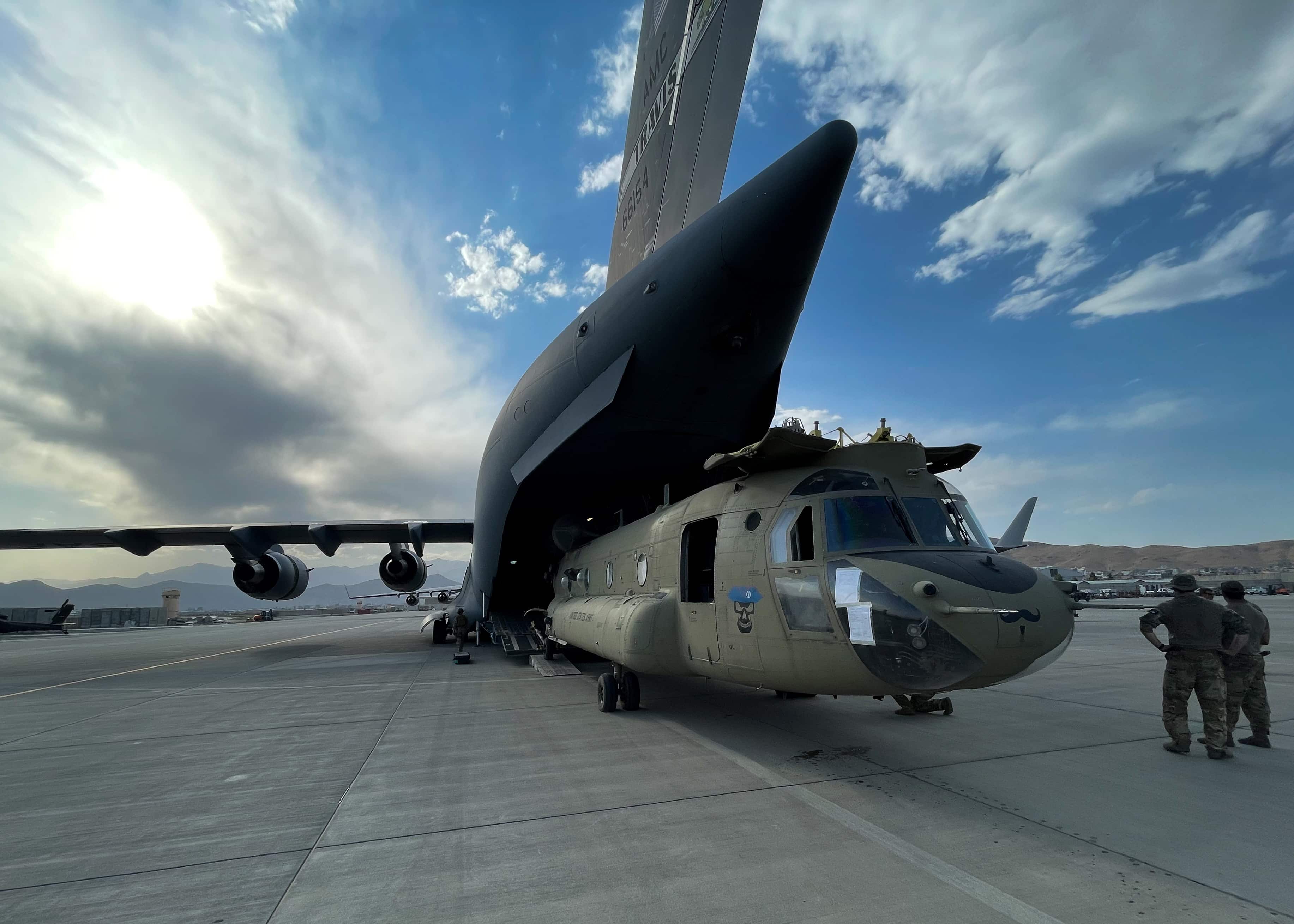 US officials have said the airport is in a bad condition, with much of its basic infrastructure degraded or destroyed.

A pilot told AFP the terminal building was trashed by passengers during the chaos of the early days of the Taliban takeover.

As well as the passenger halls, critical infrastructure has been destroyed, including air traffic control terminals, which will need to be replaced for commercial flights to run again.

On the plus side, the two-week mass evacuation campaign has shown that the airport's runways are at least operational, if in poor condition.