Leaders of the Sri Lankan protest movement, who have forced the president and prime minister from their official estates, declared on Sunday that they will remain in the buildings until the two resigned from their positions.

Playwright Ruwanthie de Chickera, flanked by other leaders who helped in organising the movement against the government, declared at a news conference at the protest site that "the president has to resign, the prime minister has to resign and the government has to go."

Meanwhile, images and videos that have gone viral on social media show a chaotic yet joyful scene inside the overrun official President and Prime Minister's houses. Let's have a peek: 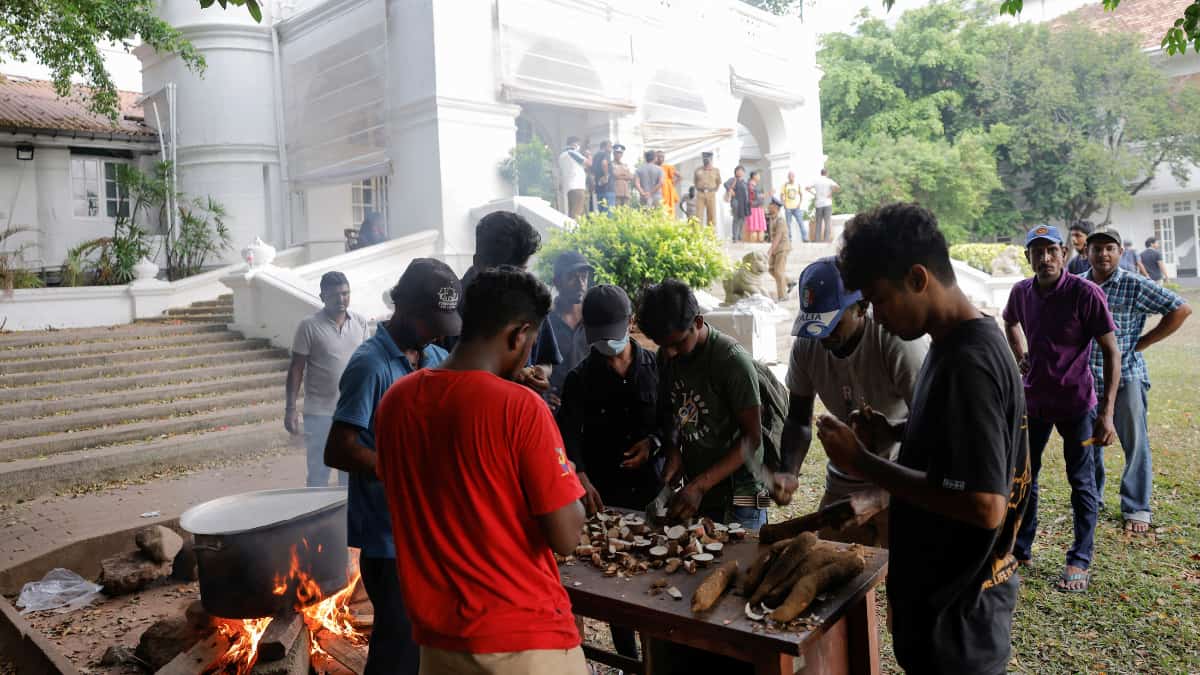 The presidential palace in Colombo was overrun by hundreds of people on Saturday, capping months of public discontent over the island nation's crippling economic crisis.

Military had to assist President Gotabaya Rajapaksa escape by firing into the air to clear the way as crowds overran the Presidential palace. 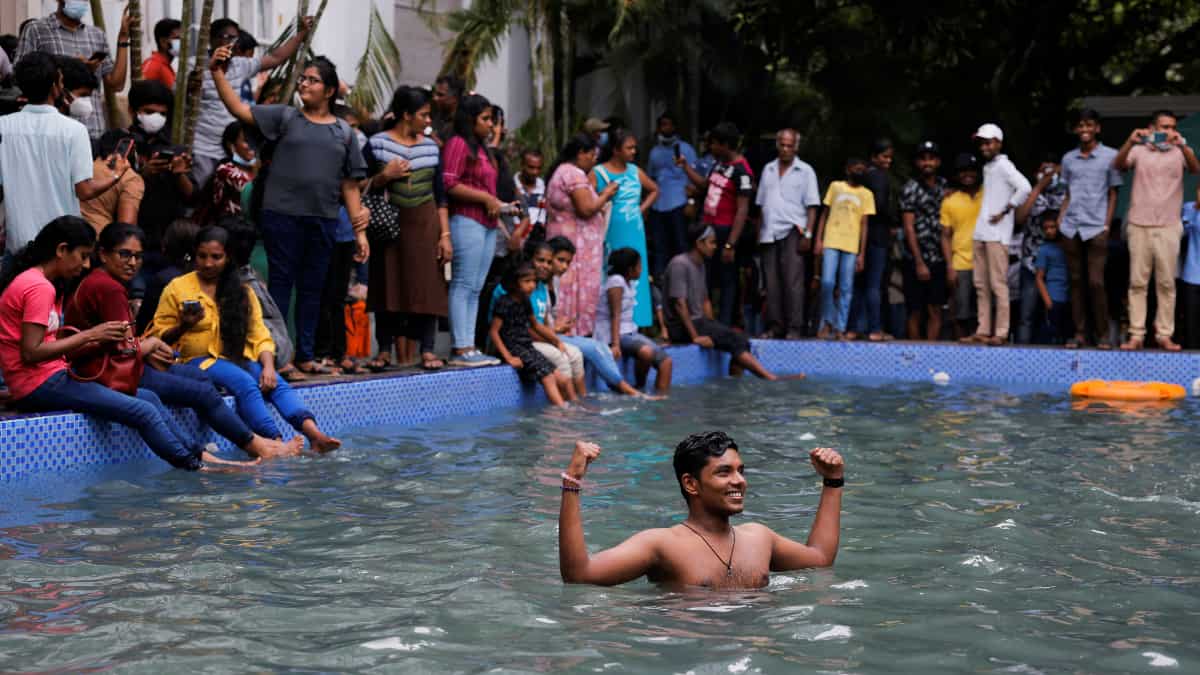 Frolicking in the pool

Hundreds of men shed their shirts on the compound's grounds and dived into the presidential pool, some performing summersaults and having a laugh in the water.

Numerous others took a break from the morning's altercation with police officers who had pelted protesters with water cannons and tear gas. 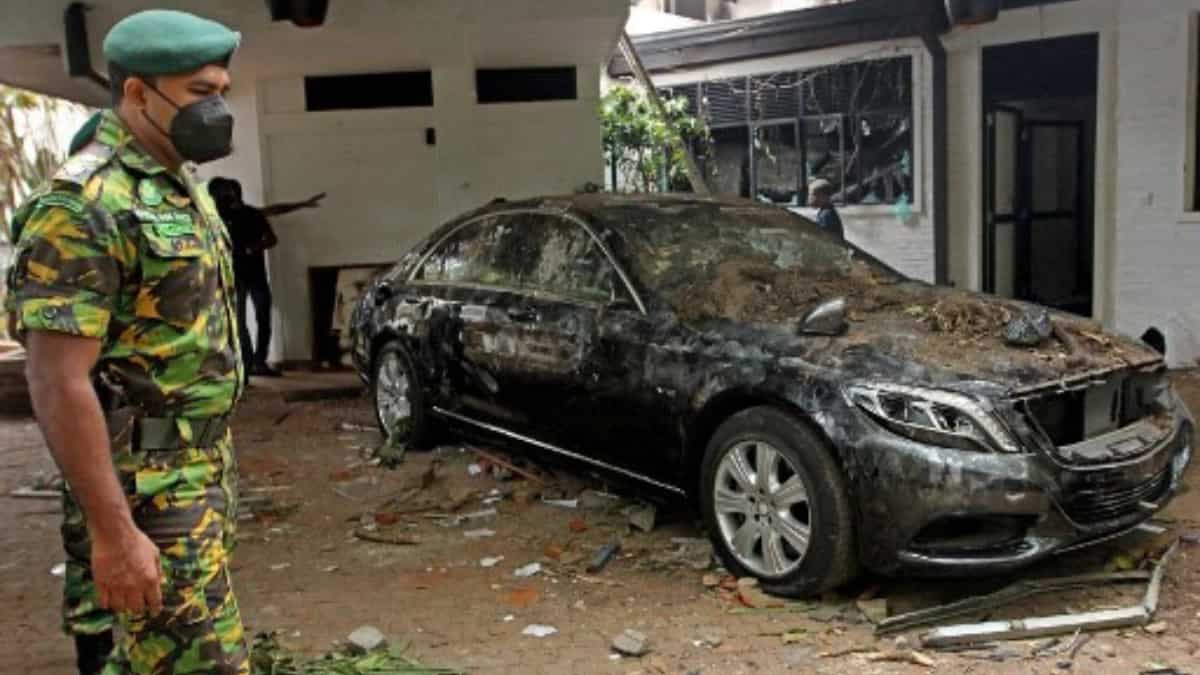 The crowd had managed to work their way into the compound after dismantling barricades and scaling its high gates with the help of a captured police truck.

As the protesters surged forwards, the police officers and army troops guarding the residence melted away.

Elite police officers remained stationed inside but made no attempt to remove the intruders roaming leisurely through the mansion. 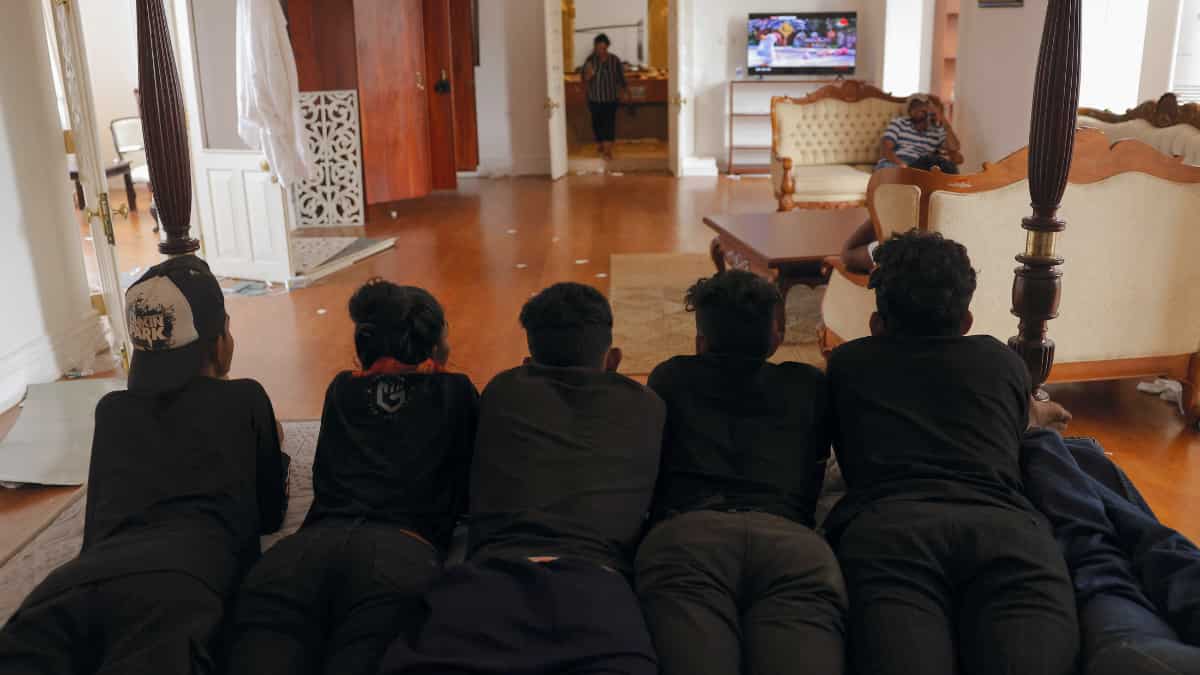 Some of the crowd took turns lounging on Rajapaksa's king-size bed and the comfortable sofas.

Protesters also helped themselves to the presidential pantry, with snacks and soft drinks seen spread out on counter tops.

"I was surprised to see that an air conditioner was working in his bathroom. We have to put up with endless blackouts," a man who entered the palace told AFP by telephone. 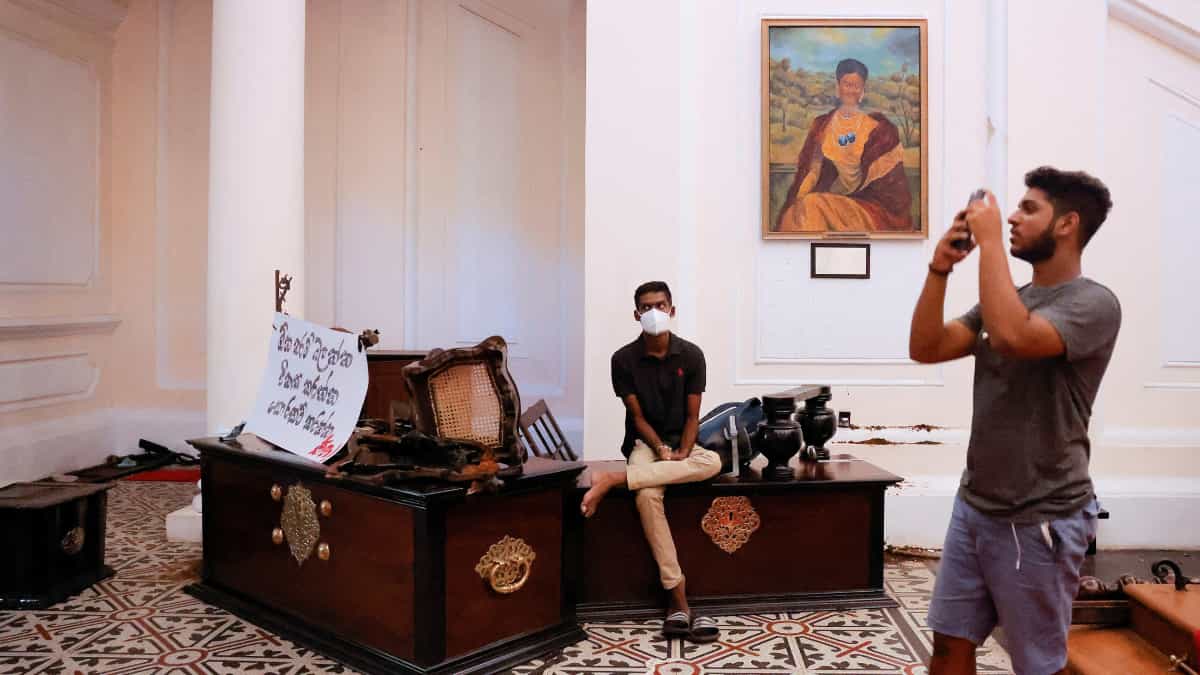 As they marched in, a university student climbed a gate post and loudly urged the throng not to vandalise or loot the state residence, which is home to a repository of priceless artefacts.

"We called Gota a thief and got him out, please do not remove anything from the palace," he said. 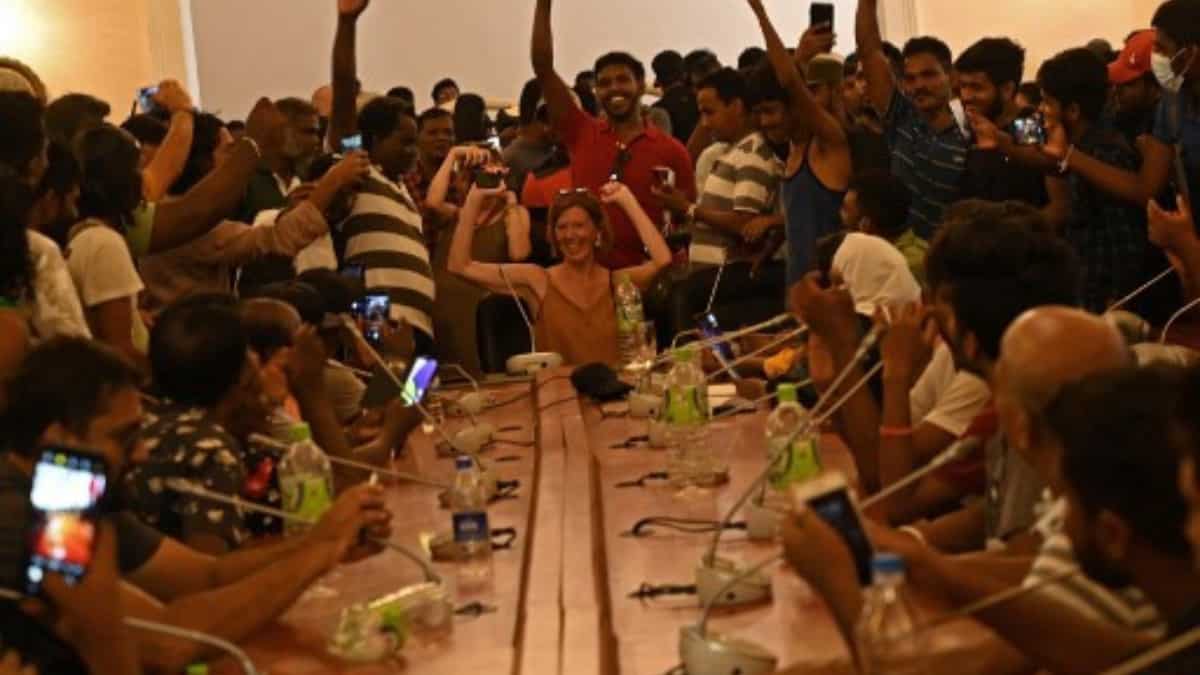 'Haunted' by the protestors

The presidential palace was formerly known as the "Queen's House", and was the official residence of British governors until Sri Lanka won independence in 1948.

Since then, it has been the official residence of Sri Lanka's heads of state -- but many past leaders have believed it to be haunted. Well, now it's "haunted" by throngs of protestors.

Only one president had lived there briefly in recent years, while all others had used it only to receive visiting dignitaries. 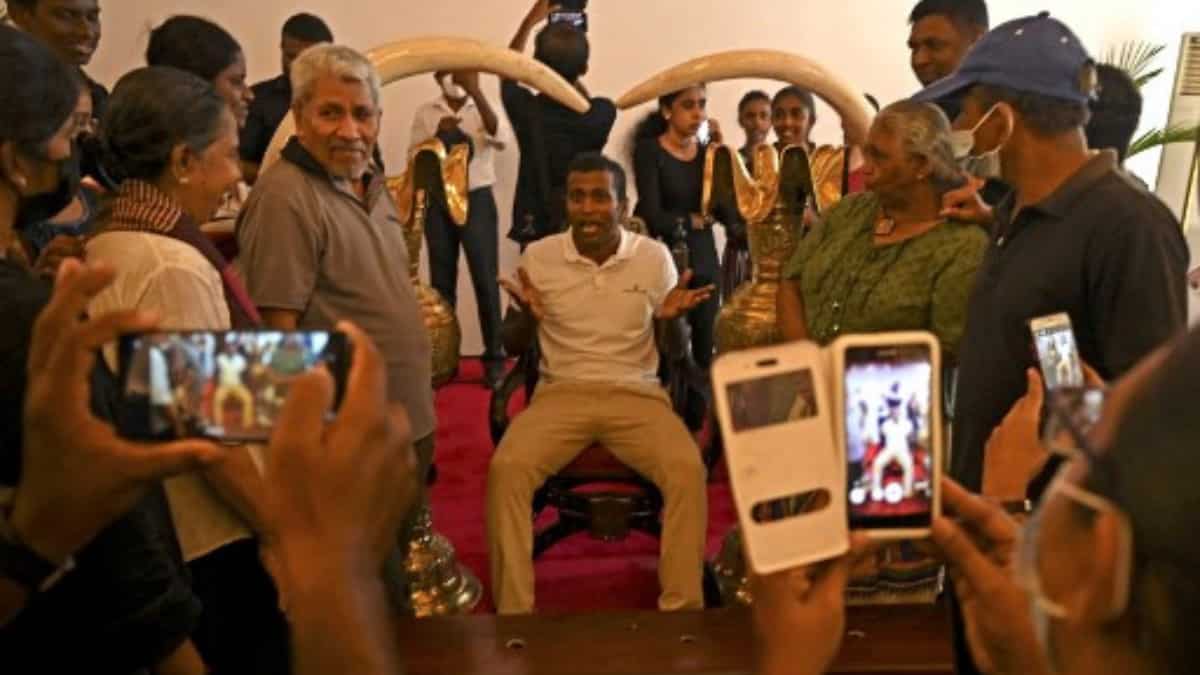 Rajapaksa moved there in April, soon after thousands of protesters attempted to invade his private home during a major demonstration.

That residence was not overrun, but he moved to the presidential palace in the ultimately futile hope that it would be safer.