Over 579 killed due to torrential monsoon rains in Pakistan; Balochistan, the worst hit province

Pakistan has been facing the acute consequences of climate change. After braving extremely hot temperatures earlier this year that broke several records, it is the abnormal monsoon season that is wreaking havoc in the country. Since last month, the torrential monsoon rains have killed at least 549 people, with the neglected and imporverished region of Balochistan amongst the hardest hit. Reportedly, Balochistan, which borders Iran and Afghanistan, received 305 per cent more rain than the annual average,

With the government lacking the resources to conduct the rescue operation and provide food as well as healthcare facilities, the problems have been compounded. Even big cities like Karachi are facing difficulties in managing the flood water. 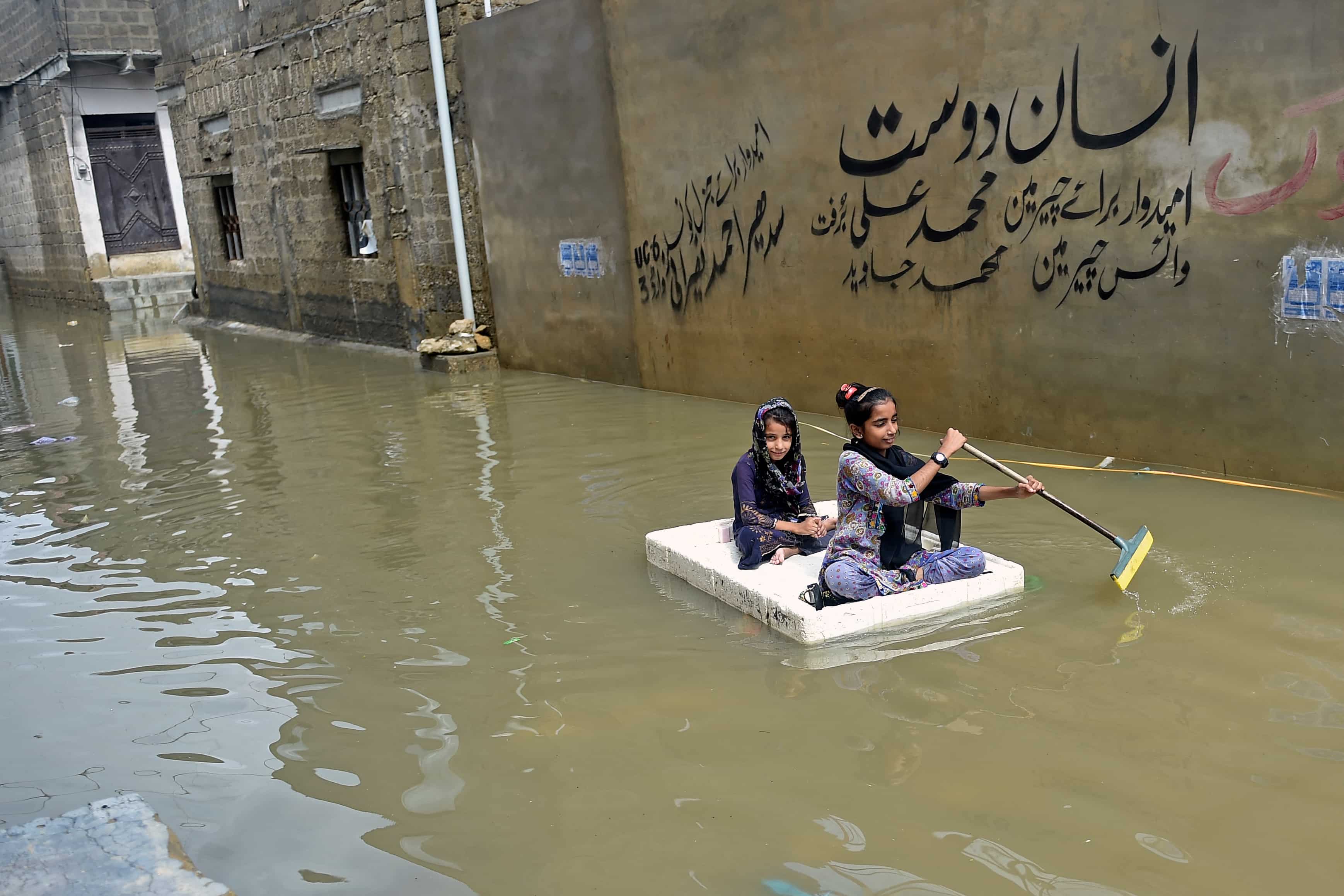 Girls use a temporary raft across a flooded street in a residential area after heavy monsoon rains in Karachi. Heavier-than-usual monsoon rains have continued to lash Pakistan's biggest city, flooding homes and making streets impassable. Pakistan's National Disaster Management Authority (NDMA) has stated that the flooding had damaged more than 46,200 houses. 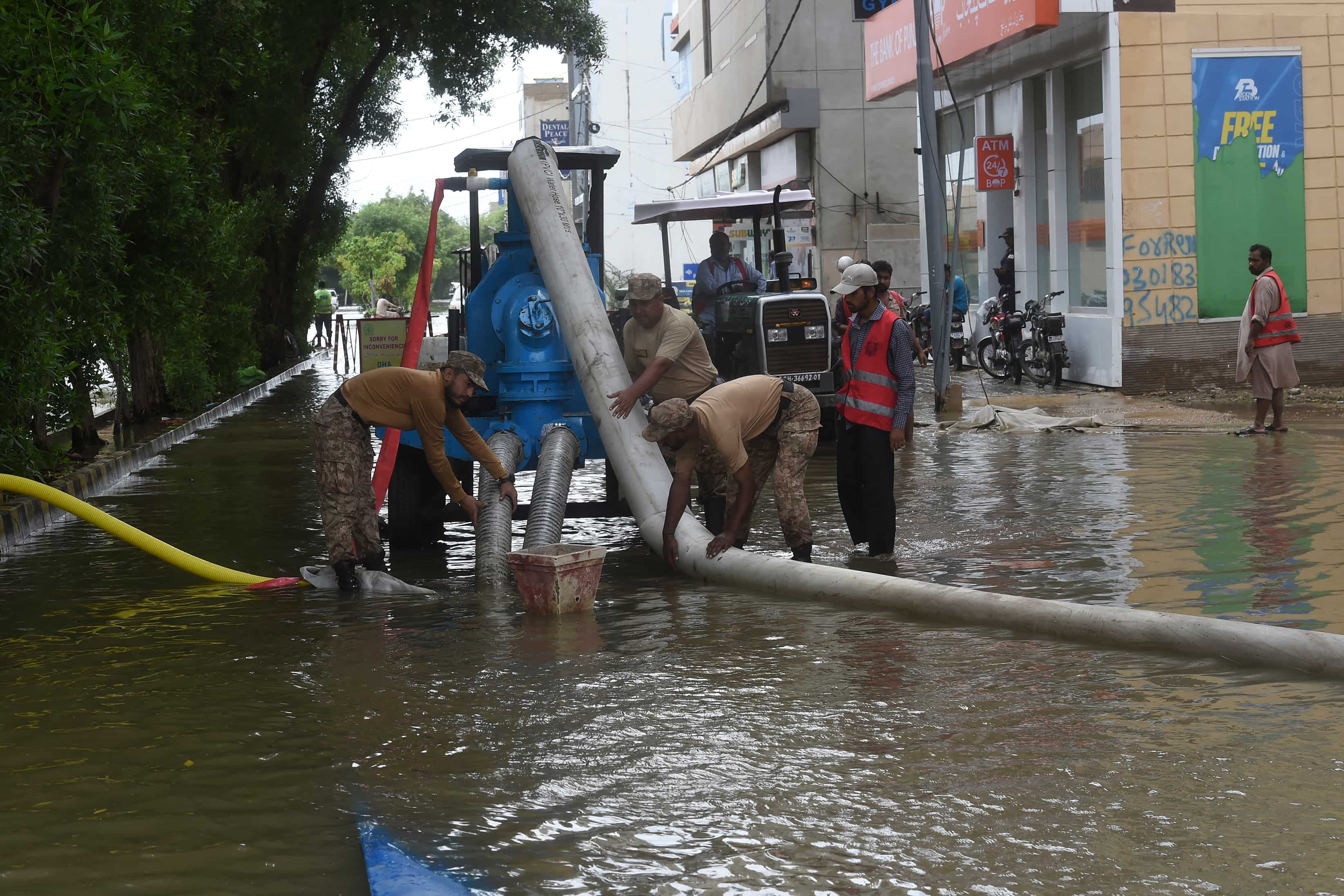 Pakistani troops use a water pump to remove water from a flooded residential area following heavy monsoon rains in Karachi. Former Pakistan Prime Minister Imran Khan targeted the Shehbaz Sharif government and stated that the ruling government failed to improve solid waste disposal and clean minor nullahs in Karachi. And that the city’s repeated flooding is a glimpse of the party's' 14 years of mismanagement and corruption in Sindh. 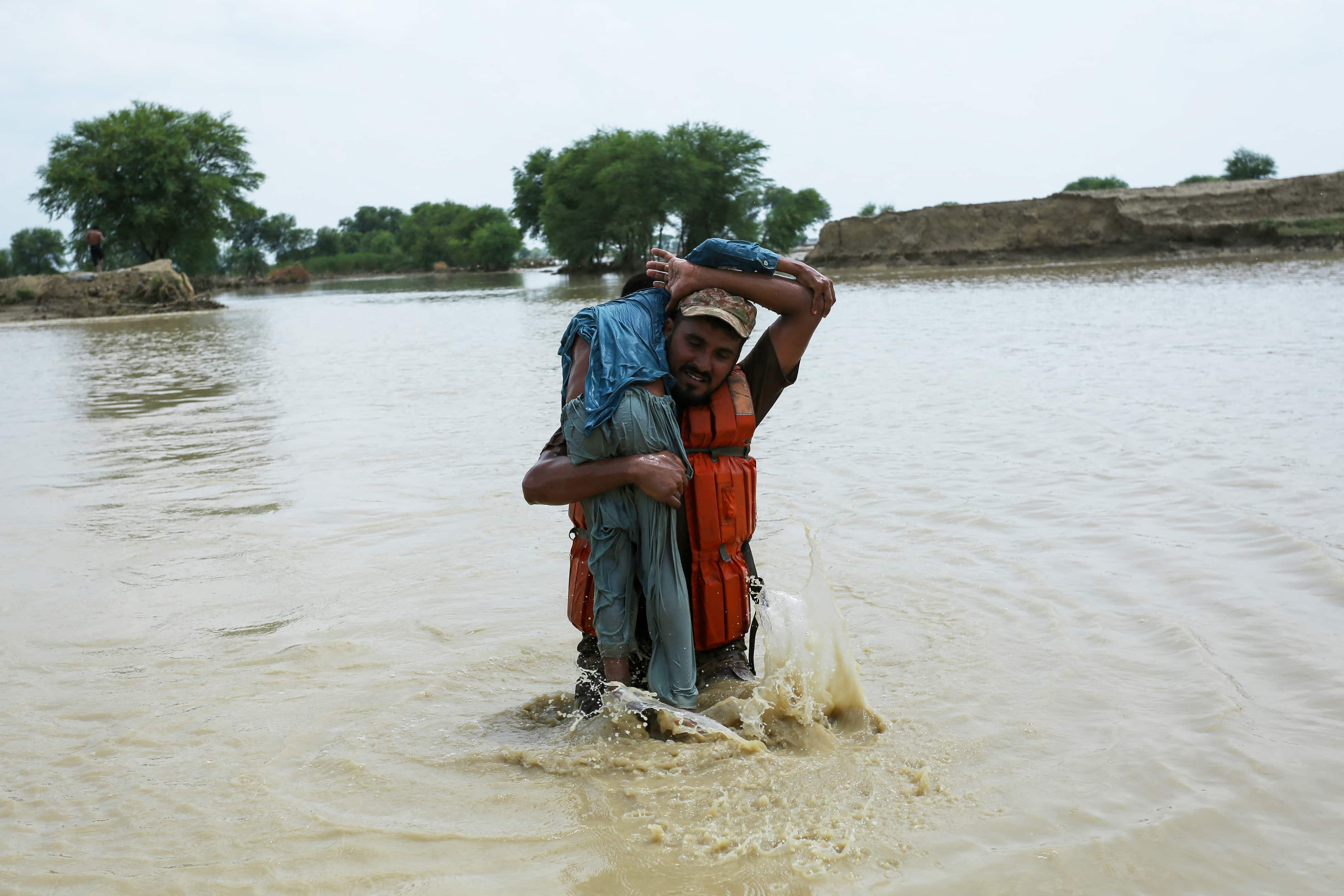 A soldier of Pakistan army rescues a child from the flood affected Rajanpur district, in the Punjab province of Pakistan. It is reported that Pak PM might visit south Punjab including Dera Ghazi Khan, Rojhan, Rajanpur, and Lasbela in south Balochistan to review the relief operations in the flood affected areas. 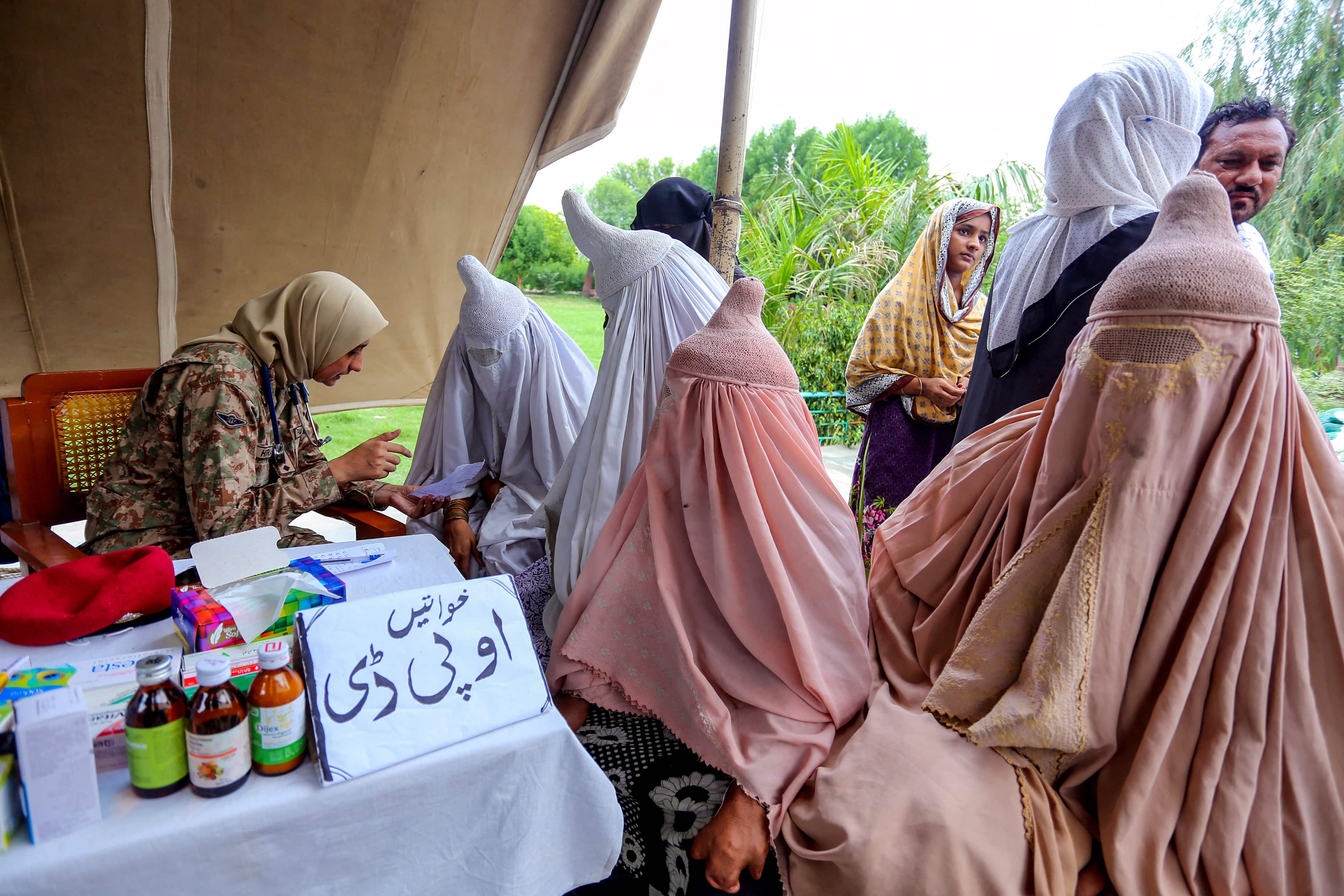 An army doctor checks a woman at a makeshift hospital in the flood affected Rajanpur district, in the Punjab province of Pakistan. "We're doing our best to provide for extensive relief and rehabilitation of flood victims," said Prime Minister Shehbaz Sharif when quizzed about what his government was doing for the people. 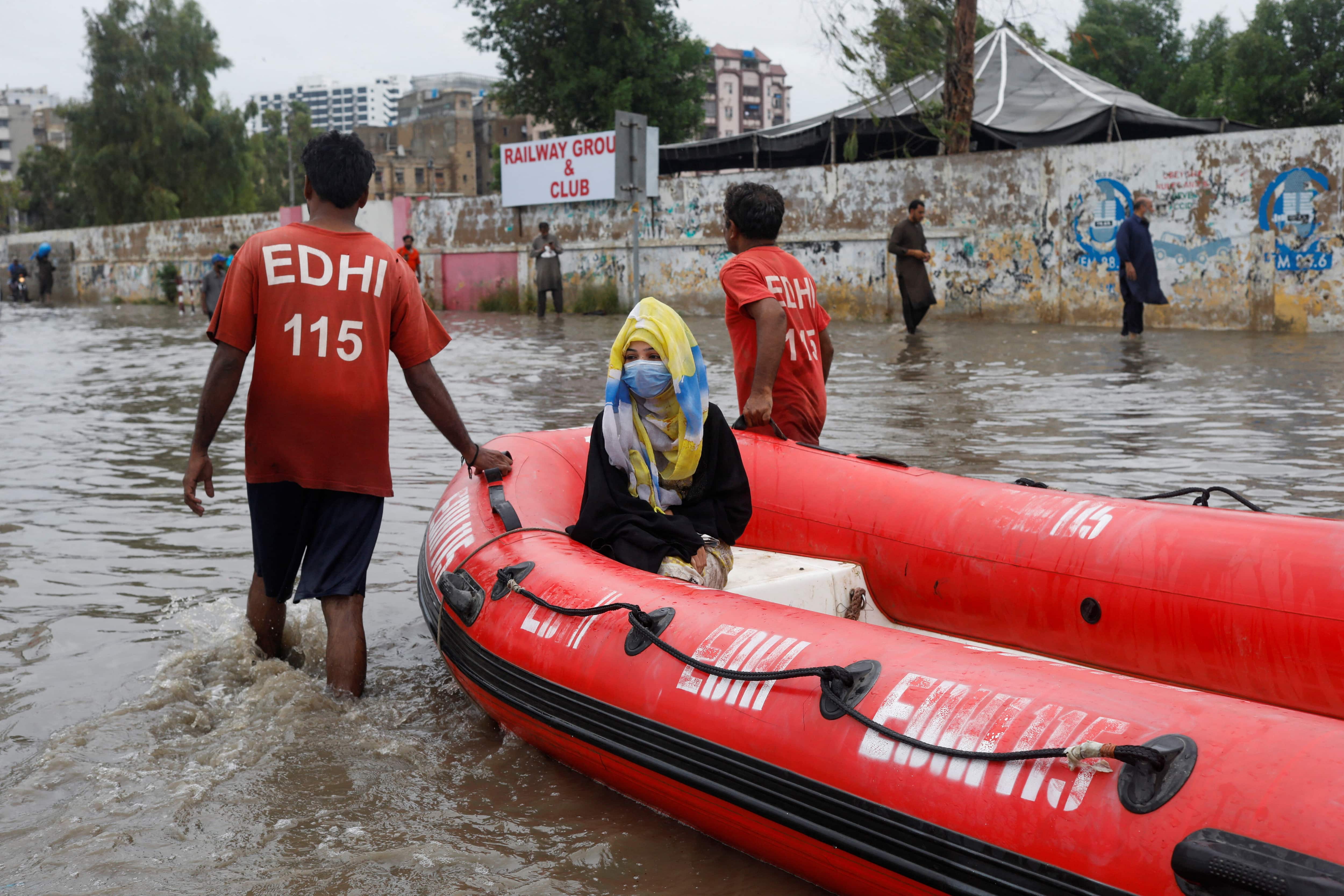 Commute difficult as rubber boats become the only way out

A woman sits in a rubber boat as volunteers pull through a flooded road during the monsoon season. The past month was the wettest in three decades, with 133 per cent more rain than the average for the past 30 year. 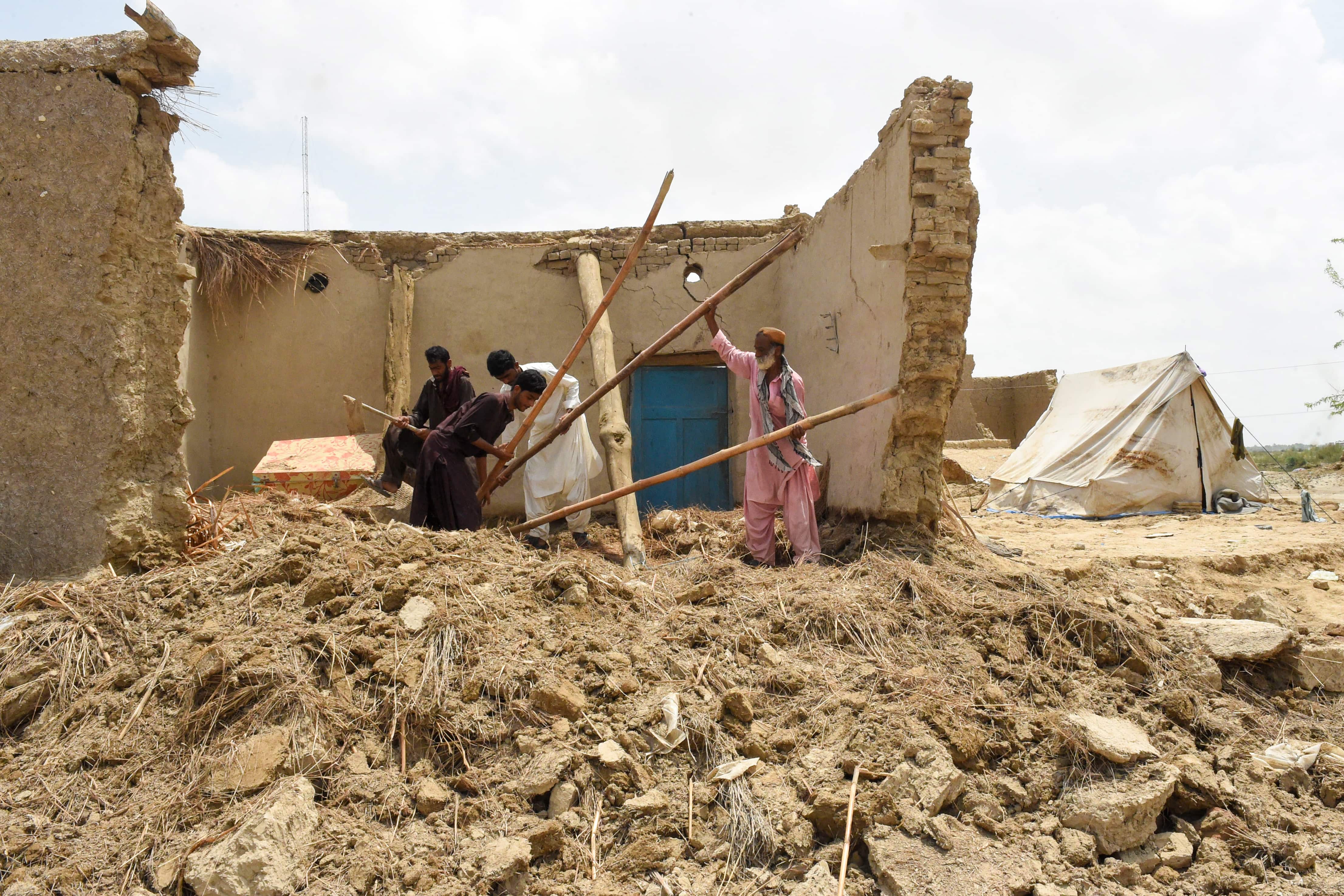 Local residents clear debris from their damaged house at a flood affected town called Gandawah in Jhal Magsi district of Balochistan. "Our losses are massive," said Balochistan's Chief Minister Abdul Qudoos Bezenjo. "There were food shortages in every district hit by the flooding, with some also disconnected from the rest of the province due to more than 700 kilometres of roads being washed away." he further added. 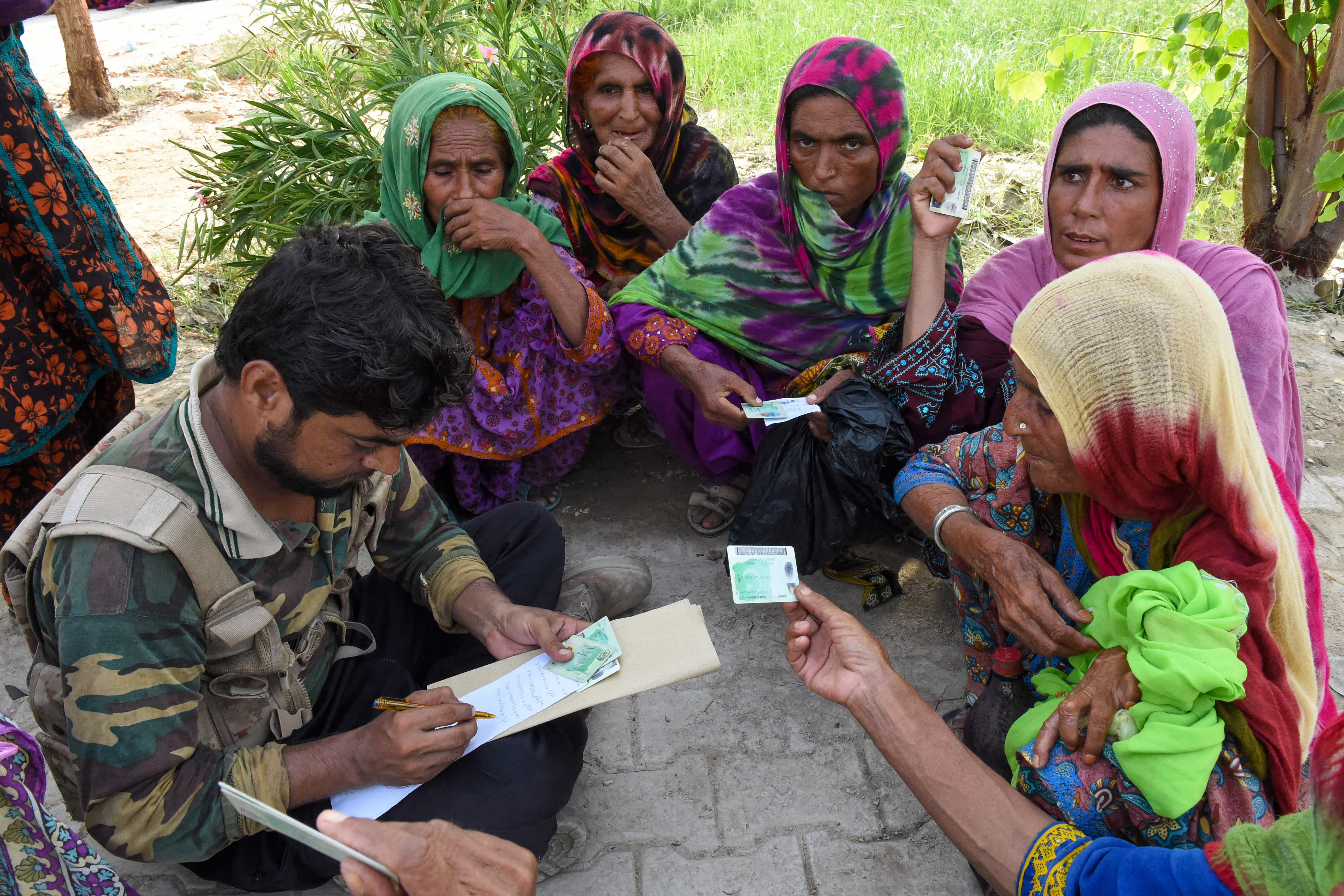 The bureaucratic hurdle in a calamity

Women identify themselves before receiving relief supplies near their damaged houses at a flood affected town in the southwestern province of Balochistan. Province's Chief Minister Abdul Qudoos Bezenjo has stated that his province needs "huge assistance" from the government and from international aid agencies. 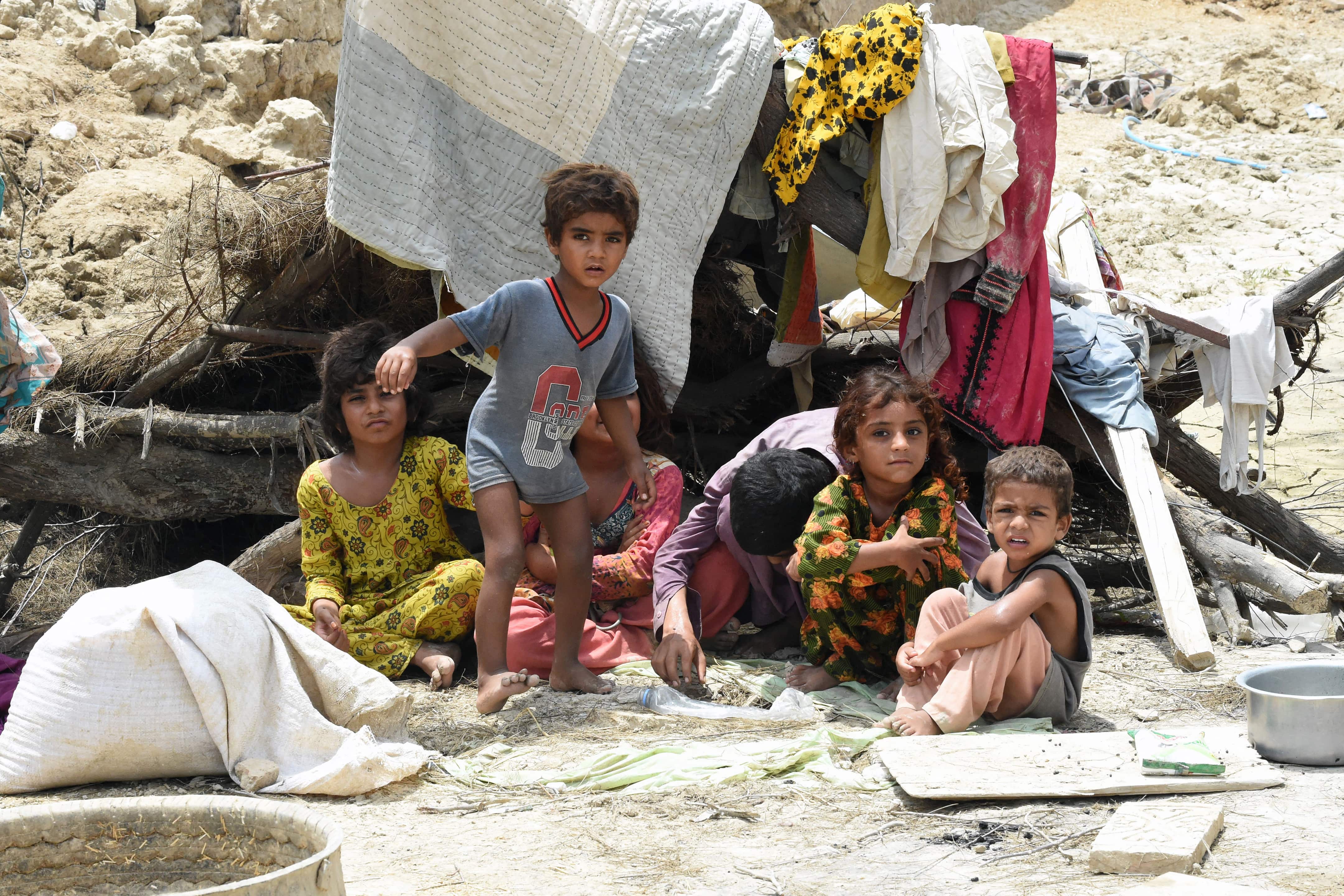 Children sit beside a damaged mud house as the flood continues to wreak havoc. According to Pakistani media, last month, the heavy flooding had briefly disconnected Balochistan from Punjab and Sindh because the highway that links Sukkur with Quetta and Dera Ghazi Khan with Loralai were closed due to the rain.