According to China's state-run Global Times, China unleashed Type 052D guided-missile destroyer, the Nanning amid tensions in South  China with the United States. 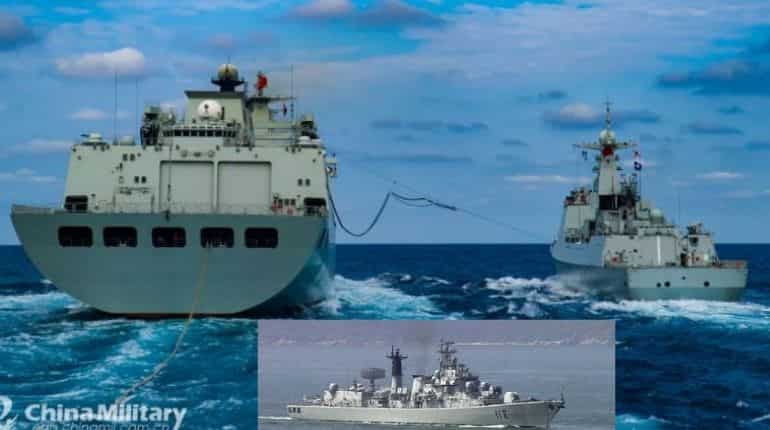 According to China's state-run Global Times, China unleashed Type 052D guided-missile destroyer, the Nanning amid tensions in South  China with the United States.

The daily said, "Four-day-long realistic-combat training exercise in the waters in the South China Sea" was conducted by the PLA.

The Chinese navy put the  Chaganhu and Qilianshan, an amphibious dock landing ship as part of the exercise alongside the Nanning.

Report say China's new warship has been commissioned into the PLA Southern Theater Command Navy. The Nanning has a helicopter flight deck and an anti-stealth radar. Reports say China has built three versions of the Type 052D destroyers with "upgraded variations".

The Global Times quoting a Chinese military expert said the destroyer has been "gaining combat capabilities at a rapid speed".

In March, China had displayed the Suzhou which is "an improved version of the Type 052D destroyer", according to Global Times.

The Chinese daily quoting reports said: "At least four of the improved Type 052D destroyers are known to the general public to have entered service, namely the Zibo, the Tangshan, the Huainan and the Suzhou."

The rapid deployment of destroyers in the South China Sea has not only created tension among the neighbouring countries who also claim islands in the area but has attracted the attention of the US and NATO as China flexes its military muscle in the troubled waters. 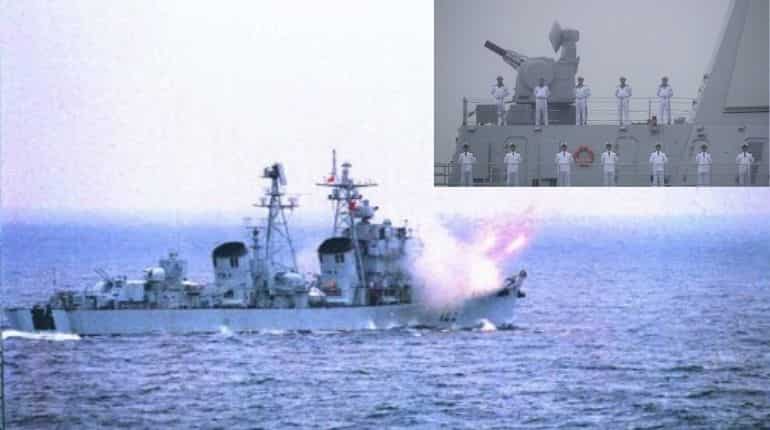 Last August, China had launched its "25th Type 052D destroyer and eighth Type 055 large destroyer". The consistent rollout of destroyers every few months has armed the PLA with several options in combat which is likely to give it an edge during real-time operations.

China and the US have been testing each other in the waters of the South China Sea.

Tensions in maritime waters claimed by both China and many of its neighbours have ratcheted up recently, with Beijing staging live-fire drills and sending hundreds of fishing vessels to a reef claimed by the Philippines.

China's military said the USS Curtis Wilbur, a guided-missile destroyer, was warned and driven away from the contested waters near the islands, which are claimed by China.

The South China Sea and its various islands are claimed by multiple countries including China, Taiwan, Vietnam, Japan, Malaysia and the Philippines. It is home to some of the world's most resource-rich waterways. 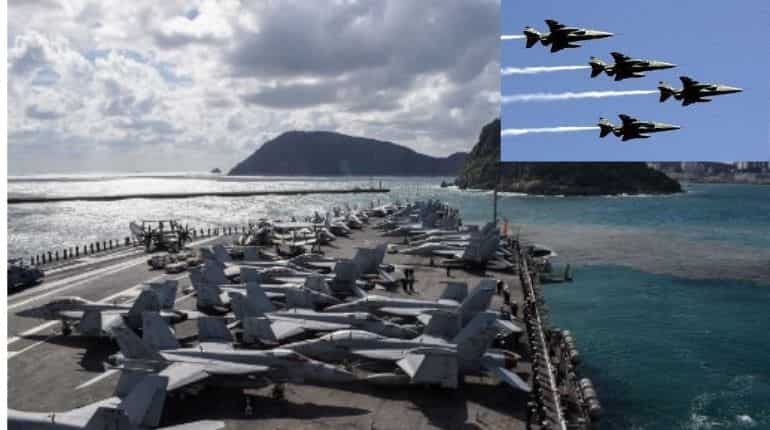 The Indian Navy and Air Force participated in a two-day mega naval exercise with the US naval carrier strike group Ronald Reagan in the Indian Ocean region from Wednesday, in reflection of the growing operational cooperation between the two navies.

The aircraft carrier USS Ronald Reagan is the flagship of Carrier Strike Group 5, providing a combat-ready force that protects and defends the collective maritime interests of its allies and partners in the Indo-Asia-Pacific region.

The Indian subcontinent is buzzing with activity and the Indian Navy is closely watching as the events unfold. India has been cleanly observing China as it has increased its presence in the Indian Ocean since 2008.

India's maritime strategy is in focus, with the Indo-Pacific being at the centre of geopolitics. The country's geographic location makes it a key player in the Indian Ocean, making the role of the Navy critical. 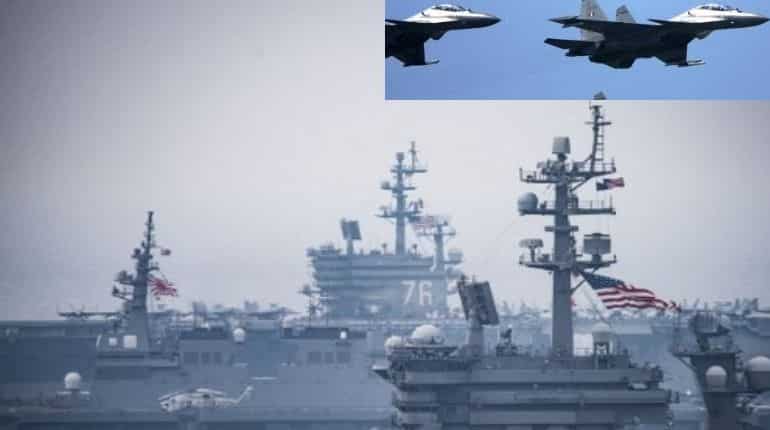 China is following a string of pearls strategy, using investments as a tool it plans to encircle India by building naval ports. The Chinese already control the Hambantota port in Sri Lanka.

India fears that the Chinese military could end up using such ports for military purposes, a fear that is shared by major nations around the world.

India, Japan, Australia and the United States are working together in the Quadrilateral Security Dialogue to counter China's rise.

India alone is taking steps to counter China's growing deployments by stepping up its own overseas deployments. India has secured agreements with other nations for military access to their bases.

A carrier battle group or Carrier Strike Group is a mega naval fleet comprising an aircraft carrier, accompanied by a large number of destroyers, frigates and other ships.

The US 7th Fleet is the largest numbered fleet in the world, and the US Navy has operated in the Indo-Pacific region for more than 70 years, providing ready forces to its allies in order to prevent conflict. 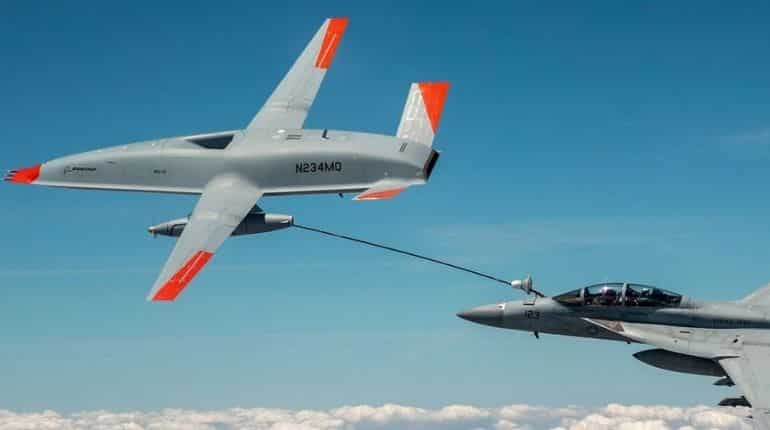 The US Navy and Boeing created aviation history as MQ-25 T1 successfully extended the hose and drogue from its US Navy-issued aerial refuelling store (ARS) and safely transferred jet fuel to a US Navy F/A-18 Super Hornet, Boeing said.

The MQ-25 Stingray's displayed its ability to carry out its primary aerial refuelling mission - a gamechanger in a combat situation when there is a need for an aircraft to stay in the air as long as possible.

As defence forces around the world use drones to perform several tasks, this new innovation in the form of MQ-25 Stingray is set to create a new dynamic Air Force with giant refuel planes no longer needed in long haul mission overground.

During the initial part of the flight, the F/A-18 test pilot flew in close formation behind MQ-25 to ensure performance and stability prior to refuelling – a manoeuvre that required as little as 20 feet of separation between the MQ-25 T1 air vehicle and the F/A-18 refueling probe.

Both aircraft flew at operationally relevant speeds and altitudes with the evaluation safely completed, the MQ-25 drogue was extended, and the F/A-18 pilot moved in to "plug" with the unmanned aircraft and receive the scheduled fuel offload. 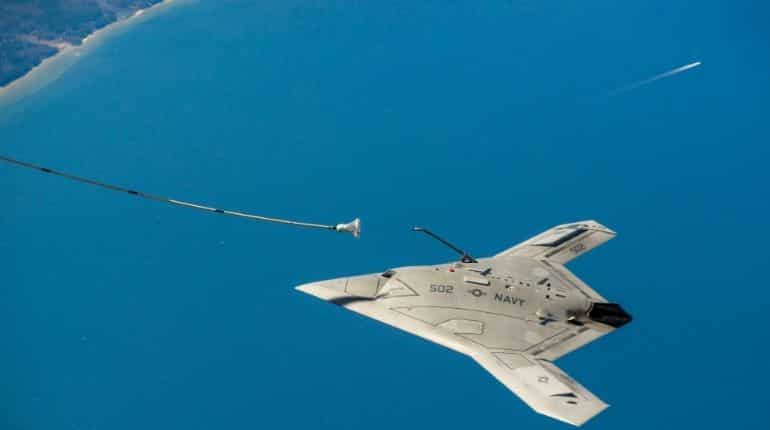 The MQ-25 will assume the tanking role currently performed by F/A-18s, allowing for better use of the combat strike fighters and helping extend the range of the Carrier Air Wing, Boeing said in a statement.

"This team of professionals was integral in the successful flight," said Rear Admiral Brian Corey, who oversaw the Program Executive Office for Unmanned Aviation and Strike Weapons.

"Over the next few years, we will work side-by-side with Boeing to deliver this capability that will greatly enhance the future Carrier Air Wing," Corey added.

It is not the first time the US Navy has demonstrated its air-to-air capability. In 2015, Northrop Grumman Corporation and the US Navy had successfully demonstrated fully autonomous aerial refuelling (AAR) with the X-47B Unmanned Combat Air System Demonstration (UCAS-D) aircraft.

During the probe and drogue AAR demonstration, the X-47B performed a close formation flight rendezvous with an Omega K-707 tanker. 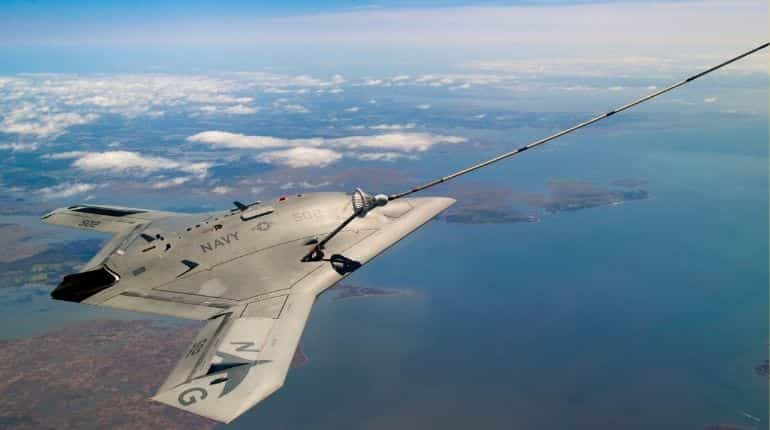 Northrop Grumman had begun developing AAR technology for both Navy and Air Force application nearly a decade ago, pioneering a "hybrid" approach that integrates both GPS and infrared imaging to enhance navigational precision and hedge against GPS disruption, the company had said in a statement.

Initial UCAS-D flight testing began in 2012 using a manned Learjet as a surrogate for the X-47B.

These successful proof-of-concept flights demonstrated the overall feasibility of the X-47B AAR system and helped refine its navigation, command and control, and infrared sensor processing components.

The experiment allowed the US Navy to integrate standard missions like aerial refueling and operate seamlessly with manned aircraft as part of the Carrier Air Wing.