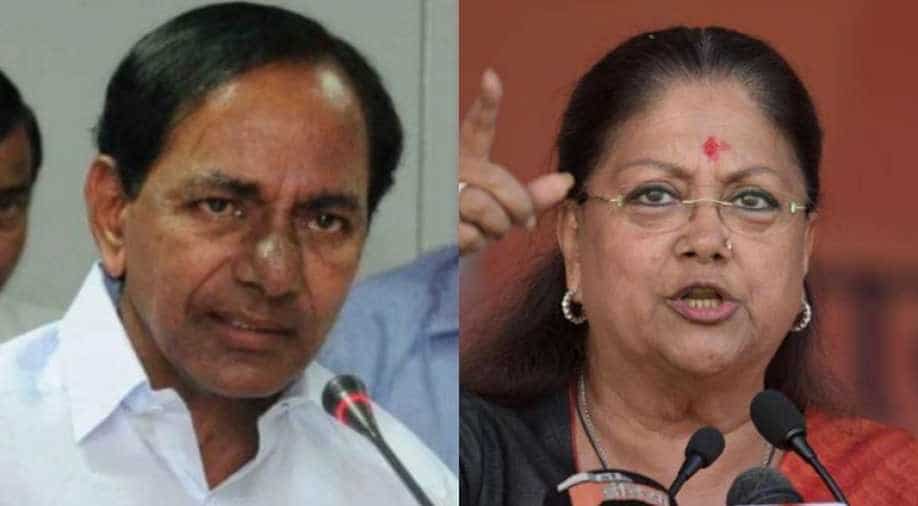 After a high-voltage campaign that saw war of words among contending parties, Rajasthan and Telangana are set for assembly polls on Friday.

After a high-voltage campaign that saw war of words among contending parties, Rajasthan and Telangana are set for assembly polls on Friday.

In Telangana the Congress-led alliance challenging the ruling TRS, and the BJP seeking to make it a triangular contest.

More than 1.50 lakh polling officials including reserve staff are in the process of giving final touches Thursday to make the election to the 119-member House a smooth affair.

Over 2.80 crore electorate are eligible to exercise their franchise in the State, which has a total of 32,815 polling stations across.

Polling will start at 7 am and end at 5 pm, while in 13 constituencies which were classified as Left Wing Extremist-affected, polling ends one hour before (4 pm).

As many as 446 flying squads are in operation in the state to swing into action if any irregularity is reported during the elections and 448 static surveillance teams would also keep a watch on the situation and would wait in wings to take action, Kumar said.

Besides, 224 video-surveillance teams and 133 video-viewing teams have been pressed into service.

There are 126 assistant expenditure observers and 123 accounting teams.

As many as 1,821 candidates including a transgender are in the fray in the election.

Counting of votes would be taken up on December 11.

Rajasthan, the land of deserts, is all geared up for the poll to the 199 assembly seats out of 200 with a major battle in the show between the Bharatiya Janata Party and the Congress.

The tug of war with a total of 2, 274 candidates in the fray will begin at 8 am and continue till 5 pm. Elections will take place at 51,667 polling stations where 4,74,79,402 people are eligible to cast vote. Alwar constituency polling has been countermanded following the death of a Bahujan Samaj Party (BSP) candidate.

The fight is to win a target of at least 101 seats to achieve majority mark in the intense polling between the two national parties.

In 2013 assembly elections, BJP won the mandate with 163 seats while Congress was reduced to 21 seats.

Contrast it to 2008 elections, when the Congress won 96 seats, a gain of 40 seats over 2003 polls and the BJP plummeted to 78, down by 42 seats from the previous assembly polls.