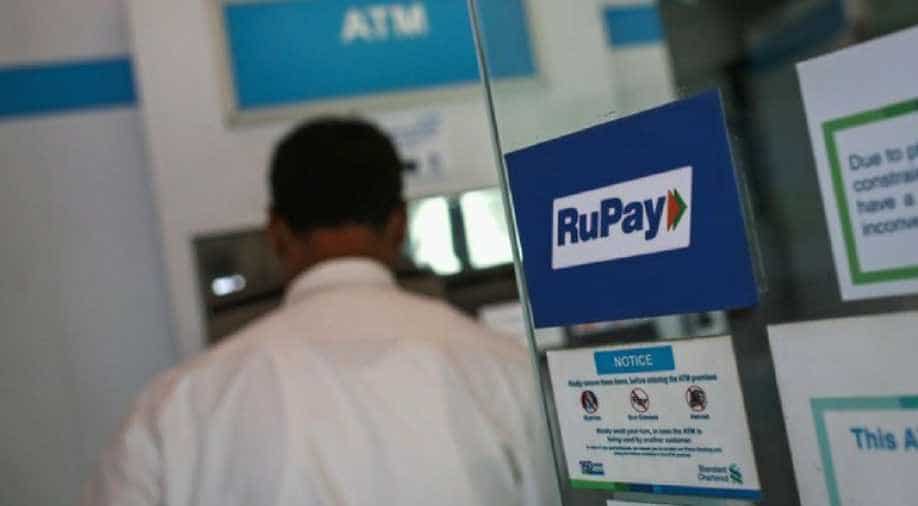 File photo: A RuPay sign is seen on the door of an automated teller machine (ATM). Photograph:( Reuters )

The bankers were assured that prudent commercial decision-making would be protected. To allay any apprehensions in this regard and take feedback, Director, CBI also attended the meeting.

Finance Minister Nirmala Sitharaman, who launched eBkry for online auction of assets attached by banks, on Saturday also held a meeting with the bankers and assured of protection for prudent commercial decisions taken by them.

In order to strengthen the digital payment eco-system and move towards less-cash economy, Finance Minister Sitharaman in her budget speech of 2019-20 had announced that business establishments with annual turnover of more than Rs 50 crore shall offer low-cost digital modes of payment such as BHIM UPI, Aadhaar Pay, Debit cards, NEFT, and RTGS to their customers, and no charge or Merchant discount rates (MDR) shall be imposed on customers as well as merchants.

According to the statement, the Department of Revenue (DoR) will notify RuPay and UPI as the prescribed mode of payment for undertaking digital transactions without any MDR.

Accordingly, all companies with a turnover of Rs 50 crore or more shall be mandated by DoR to provide the facility of payment through RuPay Debit card and UPI QR code to their customers.

The statement said that extensive reforms carried out by the government have restored banks to health, with the gross NPAs of PSBs declining from Rs 8.96 lakh crore in March 2018 to Rs 7.27 lakh crore in September 2019, their provision coverage ratio rising to their highest level in seven years, and banks returning to profitability, with as many as 13 banks reporting profits in H1FY20.

With the Essar resolution decision, banks have recovered Rs 38,896 crore, in addition to Rs 4.53 lakh crore recovered in the last four and a half years.

PSBs have attached assets worth over Rs 2.3 lakh crore over the last three financial years. eBkry, a common e-auction platform, is equipped with property search features and navigational links to all PSBs e-auction sites, provides single-window access to information on properties up for e-auction as well as the facility for comparison of similar properties, and also contains photographs and videos of uploaded properties.

The bankers were assured that prudent commercial decision-making would be protected. To allay any apprehensions in this regard and take feedback, Director, CBI also attended the meeting.

It was decided that CBI would develop a mechanism as recently introduced for income tax notices so that CBI notices carry a registration number to avoid any scope for unauthorised communication and consequent harassment.

While pursuing criminal action against those responsible, the agency shall be sensitive to the distinction between genuine commercial failures and culpability.

It was also noted that there is a need for preserving the value of the business enterprise by treating it on a separate footing from the culpability of individuals if any.

Talking about the credit outreach by banks, PSBs have sanctioned over 11.68 lakh Repo-linked loans to retail borrowers for home, vehicle, education/personal loans and to micro and small enterprises, amounting to Rs 1.32 lakh crore post the Finance Minister`s announcements on 23.8.2019 on measures to boost the economy.

In order to address the working capital needs of MSMEs on account of stress arising from delayed payments, PSBs are offering up to 25 per cent enhancement in working capital limits for standard MSME accounts as a Standby Line of Credit and have launched a MSME outreach initiative for restructuring of stressed standard assets as needed on priority and in a timely manner, besides providing new term loans, payment solutions for delayed receivables, bill discounting and trade finance.