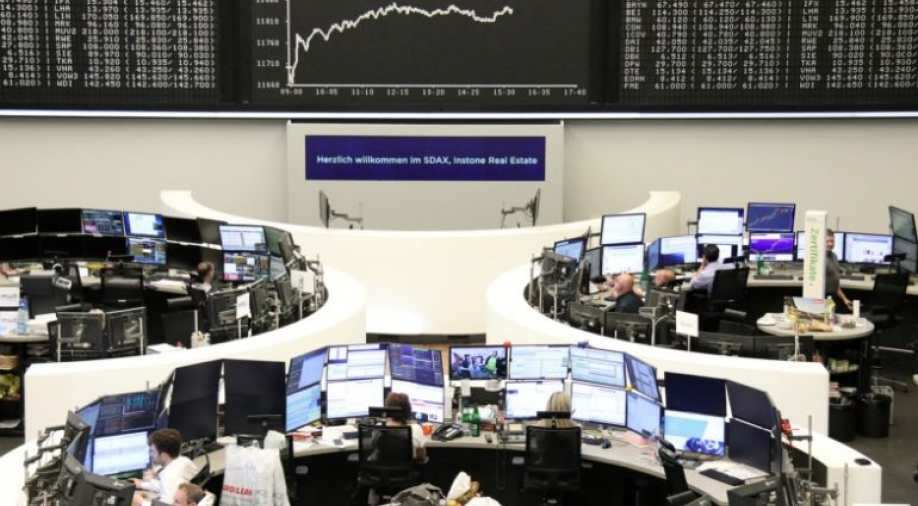 For most of August global stocks have reeled and fixed income shone as deepening concerns over global trade and clear signs of a slowdown, possibly even a recession, in the global economy loomed large over financial markets.

World stocks rose to a one-week high on cautious hopes for a rapprochement on trade between Beijing and Washington on Friday, though a perky dollar capped gains with China's yuan softening again, on track for its weakest month in 2-1/2 decades.

For most of August global stocks have reeled and fixed income shone as deepening concerns over global trade and clear signs of a slowdown, possibly even a recession, in the global economy loomed large over financial markets.

But the mood lifted after US President Donald Trump said some trade discussions were taking place with China on Thursday, with more talks scheduled.

China's commerce ministry also said a September round of meetings was being discussed by the two sides, but added it was important for Washington to cancel a tariff increase.

The MSCI All-Country World Index climbed 0.3 per cent but is on track for a near 3 per cent decline in August - only the second month the benchmark has spent in the red this year. It is the weakest of August for the index since 2015.

European stocks on Friday extended the previous session's gains, with the pan-European STOXX 600 index up 0.3 per cent to trade at a fresh one-month high.

"The trade war seesaw has certainly moved back in favour of riskier assets for now, with Trump and China supposedly holding a call yesterday," said Deutsche Bank strategist Jim Reid.

Gains were helped by a surge in German real estate firms which saw the country's DAX index add 0.7 per cent.

The picture was more mixed in Asia, where Chinese and Hong Kong stock markets dipped in and out of the red.

Arrests or detentions of pro-democracy activists in Hong Kong added to investor jitters, with the Chinese-ruled territory facing its first recession in a decade.

US futures pointed to a firmer start to the day's trade, with E-Minis for the S&P500 up 0.3 per cent after more than 1 per cent gain on Wall Street overnight.

Fixed income markets took a breather on Friday, at the end of a stellar month that has seen prices rally and borrowing costs push deeper and deeper into negative territory.

US Treasury yields nudged higher overnight, with the benchmark 10-year Treasury climbing to 1.5349 per cent from a three-year low of 1.443 per cent touched earlier this week.

It was still below two-year yields at 1.5419 per cent. Such an inversion was last seen in 2007 and correctly foretold the great recession that followed a year later.

Germany is considering lowering its corporate tax rate, while the US government is thinking about issuing 50- and 100-year bonds in a bid to steepen the yield curve.

Investors were focused on a string of economic releases due over the weekend including China's official manufacturing survey, which would provide a good gauge of the real impact from the Sino-US trade war.

In currency markets, the dollar nudged to a one month high of 98.609 against a basket of six major currencies.

Yet the trade optimism failed to inspire China's yuan, which resumed its decline with spot yuan at 7.1462 against the dollar.

The currency is on track for its weakest month since Beijing's currency reform in 1994 after it broke through the key 7 to the dollar level earlier in August.

"The yuan move back to 7 and beyond has been a distinct possibility for months. It is clearly down due to the tariffs," said Neil Mellor, senior FX strategist at BNY Mellon in London.

"It does help them to some extent to absorb the tariff costs - it is one of the few options they have. The fiscal option is limited after years of excess, and the monetary stimulus has already been unprecedented this year."

The Australian dollar, often seen as a proxy bet on the Chinese economy, slipped towards a 10-year trough.

Elsewhere, the euro plunged to a one-month low against the dollar, as investors looked for aggressive easing by the European Central Bank and ignored doubts by some policymakers about the need for more stimulus.

Sterling was steady at $1.2182 against the dollar ahead of a crucial few days for parliament next week which could even result in a no-confidence motion and a new election.

In commodities, spot gold came off recent highs to trade at $1,526 an ounce.

Silver was at $18.37 an ounce after hitting its highest level in more than two years.