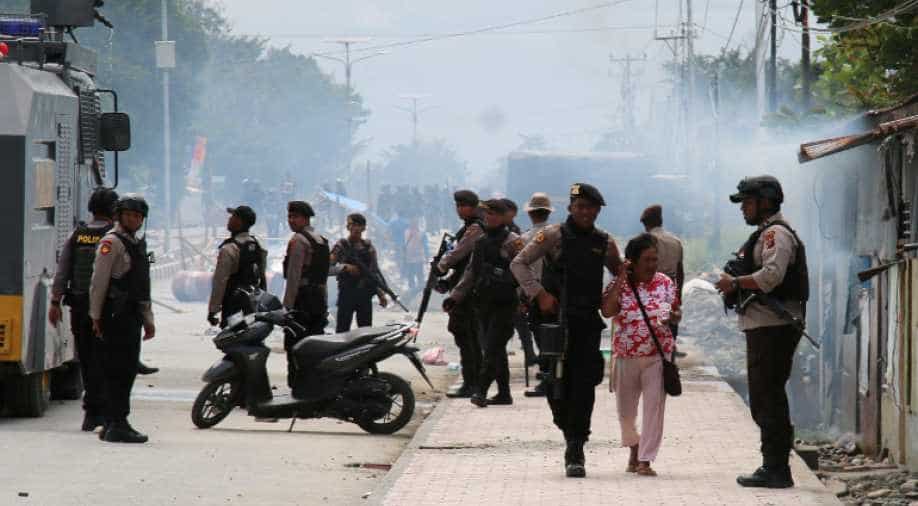 A police officer escorts a woman during a protest in Mimika, Papua, Indonesia, August 21, 2019 in this photo taken by Antara Foto. Photograph:( Reuters )

For almost two weeks, the region has been racked by civil unrest over perceived racial and ethnic discrimination. Some protesters are also demanding an independence vote

Protesters in Indonesia's easternmost region of Papua set buildings ablaze on Thursday, forcing the state power firm to cut off electricity in parts of the provincial capital of Jayapura, state media and an executive of the utility said.

For almost two weeks, the region has been racked by civil unrest over perceived racial and ethnic discrimination. Some protesters are also demanding an independence vote.

Indonesia's security chief said a referendum was out of the question, media reported.

Protesters torched a building housing the offices of state-controlled telecoms firm Telekomunikasi Indonesia. However, in a statement on Thursday, the company said it could not identify the damage yet.

The PLN utility has turned off power in areas around the torched building, Ahmad Rofik, its regional director for Maluku and Papua, told Reuters.

Shooting broke out a day earlier between protesters and police in the town of Deiyai, about 500 km (311 miles) from Jayapura.

Police said one soldier and two civilians were killed in the incident, while a separatist group said six had been shot dead. The military dismissed that as a hoax.

A separatist movement has simmered for decades in Papua, while there have also been frequent complaints of rights abuses by Indonesian security forces.

The spark for the latest unrest was a racist slur against Papuan students, who were hit by tear gas in their dormitory and detained in the city of Surabaya on the main island of Java on Aug. 17, Indonesia's Independence Day, for allegedly desecrating a national flag.

Papua and West Papua provinces, the resource-rich western part of the island of New Guinea, were a Dutch colony that was incorporated into Indonesia after a widely criticised U.N.-backed referendum in 1969.

On Thursday, chief security minister Wiranto said the government would not entertain any demand for an independence vote, according to Kompas.com.

"Demands for a referendum, I think, is out of place. Demands for referendum I think must not be mentioned. Why? Because the unity of the Republic of Indonesia is final," Wiranto said as cited by the news website.

The government has cut internet access in the region since last week to stop people sharing "provocative" messages that could trigger more violence, a step criticised by rights group and journalists, who said it had made reporting difficult.