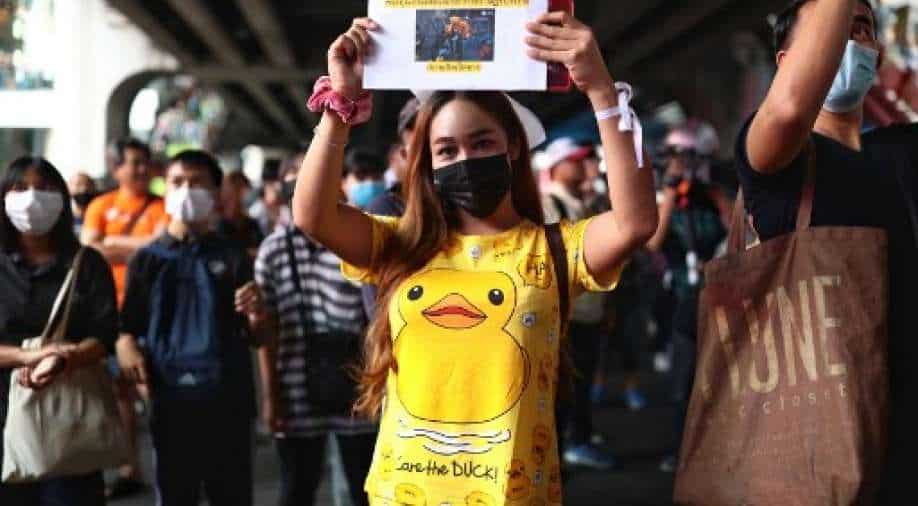 Protesters in Thailand joined school students in Bangkok on Saturday amid calls for education reforms and removal of Prime Minister Prayuth Chan-ocha government and curbs on the power of the monarchy. In Pics: Protests the Thai way: Pool ducks, Hunger Games salute & drag queens

The "Bad Student" group greater freedom and fairer treatment in the education system. Reports said at least two students were ordered to report to the capital's police station for questioning.

Also Read: Thailand PM threatens to use 'all laws' against pro-democracy protesters

However, the Thai prime minister has dismissed resignation demands even as the opposition has repeatedly accused him of unfair practices during last year's polls.

The "Bad Student" movement has been calling for the resignation of education minister Nataphol Teepsuwan with teenage girls spearheading the movement.

The "Bad Student" group has been active on social media with the hashtag #ByeByeDinosaurs trending on Saturday.

The protests which have been taking place since July have been largely peaceful, however, over the past month it has become violent with clashes reported between royalists and anti-government protesters.

At least 55 people were hurt last Wednesday when demonstrators clashed with police and royalist counter-protesters near the Thai parliament.

The police had put barriers outside parliament even as the demonstrators cut through it, some protesters were hit with gunshot, however, the police denied they had used live ammunition or rubber bullets. Reports said at least six people had gunshot wounds.

Amid criticism, government spokesman Burapachaisri said the police was obliged to use teargas and water cannon to keep lawmakers safe.