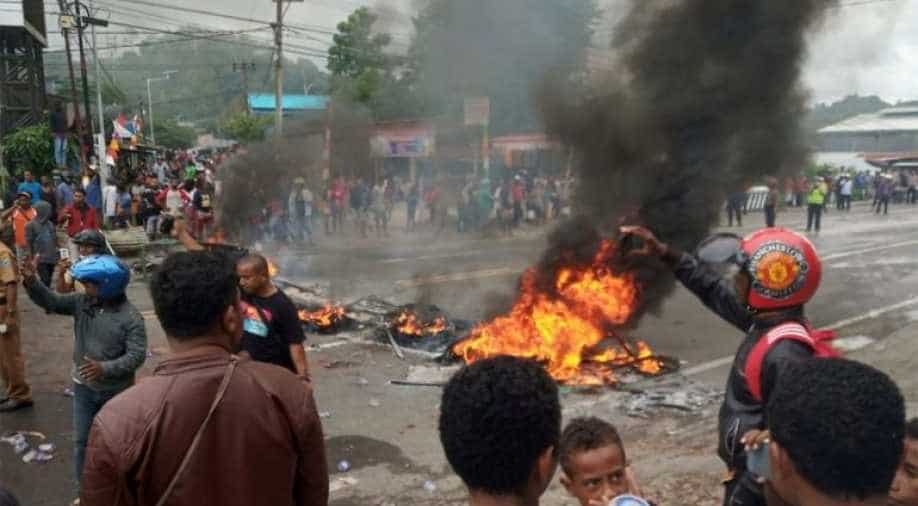 Smoke rises during a protest, as demonstrators set fire to tyres and torched a local parliament building, in Indonesia's easternmost province of Papua. Photograph:( Reuters )

Authorities are hunting for more than 250 inmates who had escaped from a prison in Sorong that was torched during the riots.

Indonesia's Papua was hit by fresh unrest Wednesday as more than 1,000 security personnel were sent to the restive region after violent protests that saw buildings torched and street battles between police and demonstrators.

Jakarta has called for calm in its easternmost territory - where an insurgency against Indonesian rule has simmered for decades -- following riots triggered by the detention of dozens of Papuan students in Java at the weekend.

On Wednesday, about 1,000 people protested in the streets of Timika city, where demonstrators threw rocks at the windows of a local parliament building as they tried to tear down its fence.

Hundreds also marched through the streets of Sorong city, and in the town of Fakfak on the western edge of the island, which is divided between Indonesia and the independent nation of Papua New Guinea.

Several cities in resource-rich Papua were brought to a standstill this week, including Manokwari where businesses and the local parliament building were set ablaze by angry demonstrators.

Authorities are hunting for more than 250 inmates who had escaped from a prison in Sorong that was torched during the riots.

Several police officers had been injured, authorities said, and there are unconfirmed reports of wounded demonstrators. No deaths have been reported.

Some 1,200 extra police and troops have been deployed to Manokwari and Sorong, according to the government and Papuan authorities.

But security personnel were not equipped with live bullets, and the situation was "generally under control", National police spokesman Muhammad Iqbal said Wednesday.

"It is standard that if things escalate (authorities) will deploy additional personnel," he added.

But the move could aggravate tensions, observers warned.

"I'm really afraid this is getting out of control," she added.

The government has moved to slow down Internet connections in parts of Papua to stop the spread of online hoaxes it said could spark more demonstrations.

Anger boiled over at reports that authorities tear-gassed and detained some 43 Papuan university students in the country's second-biggest city, Surabaya, on Saturday - Indonesia's independence day.

Police in riot gear stormed a dormitory to force out students who allegedly destroyed an Indonesian flag, as a group of protesters shouted racial slurs at the students.

Authorities said the students were questioned and set free.

Indonesian leader Joko Widodo, who pledged to investigate the Surabaya incident, was expected to visit Papua next week.

"It is sad that the Indonesian government only listens to their decades of frustration when these people retaliated," said Andreas Harsono, a researcher at Human Rights Watch in Jakarta.

Papua has been the scene of a decades-old rebel insurgency aimed at gaining independence from Indonesia, which took control of the former Dutch colony in the early Sixties.

Security forces have long been accused of committing rights abuses against its ethnic Melanesian population, who say they've not shared in the region's vast mineral wealth.

Tens of thousands of Papuans have been displaced amid intense fighting between troops and guerrillas after a rebel faction killed 19 construction workers at a remote jungle camp last year.

The employees of a state-owned contractor had been building bridges and roads as part of efforts to boost infrastructure in the impoverished region.