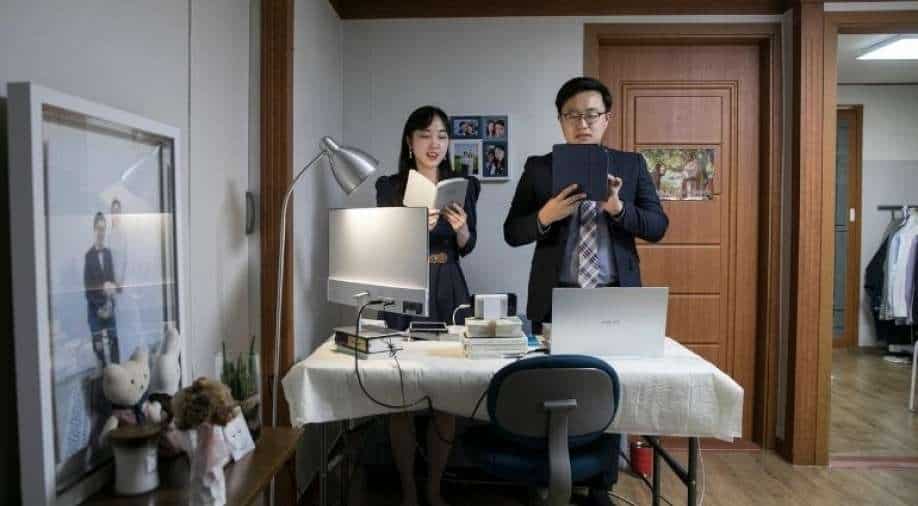 Kim Keun-hyeong, another conscientious objector, and his wife, Kim Seoyoung, prepare for an online church service in Bucheon, South Korea on Oct. 14, 2020. A court ruled that conscientious objectors in South Korea must be allowed to serve their country in other ways but the government says they’ll still have to do so behind prison walls. (Woohae Cho © 2020 The New York Times) Photograph:( The New York Times )

Alternative service is a seismic shift in a country that considers conscription crucial to its defense against North Korea, with which it is still technically at war

Like thousands of other Jehovah’s Witnesses who refused to join the military because of their religious beliefs, Lee Seung-ki will serve time in a South Korean prison.

But unlike those before him, Lee will not enter as a convicted criminal. He will be among the first conscientious objectors in South Korea allowed to perform alternative service — jobs like cook, ​janitor and clinic assistant​​ — behind prison walls.

For three years starting Monday, Lee and 63 others will work, eat and sleep in prisons, though they will live apart from the inmates and will be allowed several weeks of leave. And unlike Jehovah’s Witnesses who served prison terms for their beliefs, they will have no criminal record to trail them for the rest of their lives.

Alternative service is a seismic shift in a country that considers conscription crucial to its defense against North Korea, with which it is still technically at war. Military duty is seen as a revered rite of passage for able-bodied young men, who are required to spend 21 months in uniform, usually between the ages of 18 and 28.

South Korea has imprisoned more conscientious objectors than any other country. Its Military Service Act requires up to three years in prison for those who refuse the draft without “justifiable” reasons. For decades, hundreds of young men, almost all of them Jehovah’s Witnesses, were put behind bars each year, usually for 18 months. As inmates, they did much of the same work that Lee will be doing.

“The difference is that the old objectors did it for 18 months wearing a prisoner’s uniform, but we will do it for three years as legalized conscientious objectors,” Lee said. “I am grateful that I am finally given this chance to serve the country without ​violating my conscience.”

A historic 2018 ruling by the Constitutional Court found that imprisoning conscientious objectors was unconstitutional because there were no alternative forms of service, and it ordered the government to create some. In December, parliament passed legislation that allowed for civilian service in prisons “and other areas of public interest” — though for now, at least, prison work is the only option the government is offering.

Human rights groups were critical, saying that the three-year requirement made South Korea’s alternative service the longest in the world.

Conscientious objectors “are confronted with little more than an alternative punishment,” Arnold Fang, an East Asia researcher for Amnesty International, said in December. “Confining people to work in a prison — and for almost twice as long as the typical military service — does not respect their right to freedom of thought, conscience, religion or belief.”

Still, for Jehovah’s Witnesses, alternative service is a hard-won victory.

In the decades after the Korean War, when South Korea was ruled by military dictators, male Jehovah’s Witnesses of draft age who refused to serve were dragged into military boot camps and stockades, where they were vilified as “traitors,” beaten and in some cases killed, according to reports from a presidential commission in 2008.

One member of the church, Kim Keun-hyeong, 27, said he knew from an early age that he would end up in prison unless he abandoned his beliefs. His older brother, also a Jehovah’s Witness, was imprisoned for refusing military service. When Kim disobeyed his enlistment order, he, too, was put on trial on charges of dodging the draft.

But his case was suspended in 2013, when he joined 27 others to mount the legal challenge that led to the Constitutional Court’s ruling.

After the court’s ruling, officials and lawmakers weighed various forms of civilian service, like working in nursing homes, fire stations or hospitals. Some argued that if alternative service was not long and rigorous enough, young men would try to evade the draft under the pretext of ethical principles, compromising the country’s ability to deter North Korea’s 1.1 million-strong military.

In their prison work, conscientious objectors will be exempt from guard and prisoner-escort duty, which involves carrying firearms. But like soldiers, they will live together in barrackslike facilities.

The question of who should be excused from military service has long been a sensitive topic in South Korea.

“It’s a sacred duty to defend our country, but that doesn’t mean that everyone has to ​carry a weapon,” Noh Woong-rae, a senior lawmaker in the governing party, said this month. He floated the idea that K-pop stars, like members of BTS, should be exempted from the draft.

For decades, top athletes have been excused from military service on the grounds that they enhanced national prestige. K-pop fans say it is unfair that world-class pop stars are denied that privilege.

In a report to parliament this month, the Military Manpower Administration, which oversees the draft, offered a compromise: It would let top K-pop stars postpone their service so that they could perform for a few more years at the peak of their careers.

Such a revision would be a godsend for the oldest member of BTS, Kim Seok-jin, who turns 28 in December and must enlist within the following year.

But South Korea cannot afford too many exemptions. After decades of low birthrates, it will soon lack enough young men to maintain its conscript military at 620,000 members, defense officials say. (The military accepts female volunteers — about 13,000 are now serving — but there has never been serious discussion of drafting women.)

There is still much hostility in South Korea toward men seen as draft dodgers. Yoo Seung-jun, 43, once one of the most popular K-pop singers, saw his career crash and burn in 2002, after he was accused of evading military service by becoming an American citizen. He has since been barred from entering South Korea.