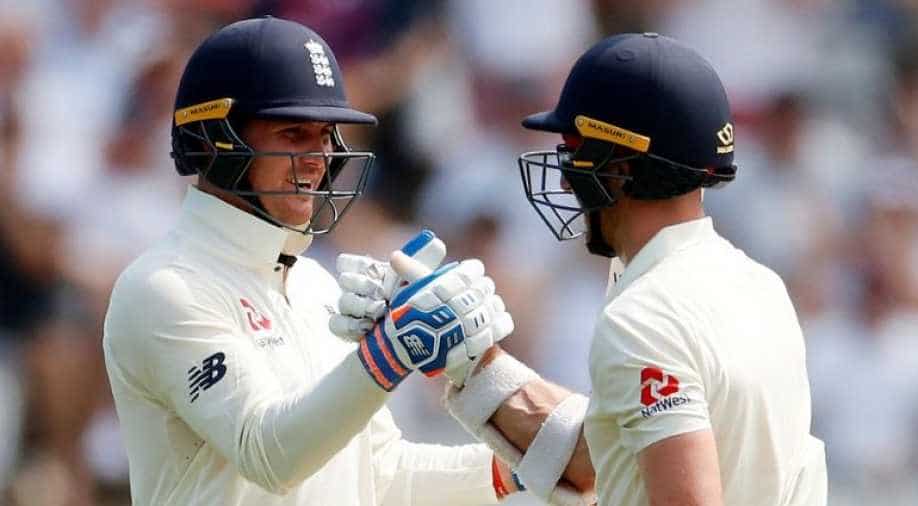 England were 122 for one in their second innings at lunch on the second day, having drawn level after conceding a first-innings deficit of 122.

Batsmen Jack Leach and Jason Roy both scored their maiden Test fifties as England fought back against Ireland at Lord's on Thursday.

England were 122 for one in their second innings at lunch on the second day, having drawn level after conceding a first-innings deficit of 122.

Leach, primarily a left-arm spinner but sent in as a nightwatchman opener on Wednesday, was 60 not out - the first time he had reached double figures in first-class cricket this season - and Test debutant Roy was unbeaten on 52.

Their unbroken partnership is so far worth 96 runs after they came together at 26-1 following the dismissal of Rory Burns, Roy's Surrey teammate.

In contrast to their woeful Wednesday morning, when they were bowled out for 85 after winning the toss, with seamer Tim Murtagh taking 5-13 on his Middlesex home ground, England got through Thursday's first session for the loss of just Burns's wicket.

England resumed on their overnight 0-0 after Ireland had made 207, featuring Andrew Balbirnie's 55, in the visitors' first Test match against England and only their third in total.

The one-off fixture was scheduled to last four days, rather than the standard five for a Test, and England had to hope they could tire Ireland's attack by keeping them in the field on another hot day in north London.

But to do that, they would have to bat far better than on Wednesday, when they were bowled out in a single session for the fourth time since 2016 - a worrying sign ahead of an Ashes series that starts next week.

And when fast bowler Boyd Rankin, the first cricketer since the Nawab of Pataudi in 1946 to both play for and against England in a Test match, dropped short, Leach cut him for four.

Burns, selected as an opening batsman, looked the more likely to be dismissed and, for the second time in the match, the Surrey left-hander fell for six when he pushed hard at Rankin away from his body and edged a simple catch behind to wicketkeeper Gary Wilson.

Leach, however, carried on and when he off-drove Mark Adair for three he went to 25 - more than any England batsman managed in the first innings of this match.

Roy, looking to make England's problem position of Test opener his own after starring in England's World Cup triumph, off-drove a four off paceman Adair and hoisted off-spinner Andy McBrine for six.

Leach went to 47 with a straight-driven four off Stuart Thompson before his edged boundary through third man off the medium-pacer saw him to an 82-ball fifty featuring eight fours.

It was a fine effort by Leach, playing his fifth Test but first on home soil, given his previous highest score at this level was 16 against New Zealand in Christchurch last year.

And when Roy cut Thompson to the point fence, he completed a 47-ball fifty including seven fours and a six.