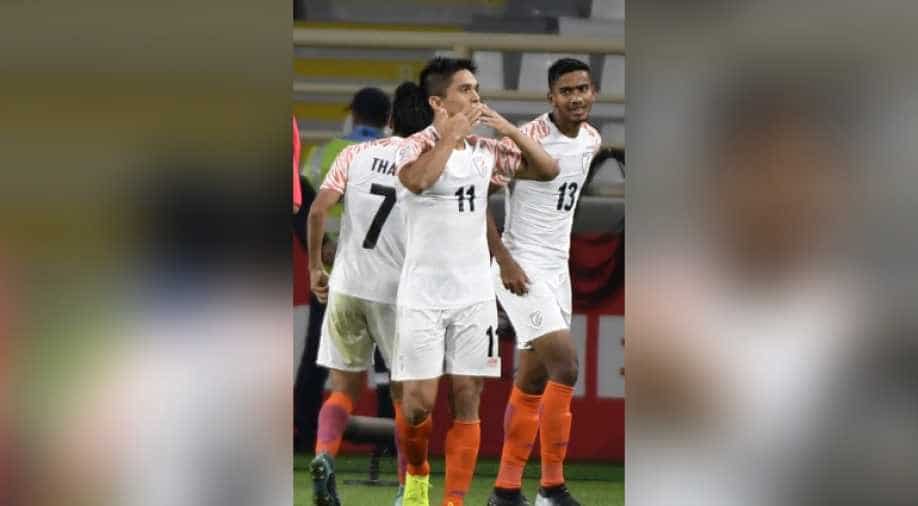 Chhetri scored a world-class goal -- his second of the game -- but he preferred to talk everything else but his strike, which became a talking point for Indian football fans.

To say Sunil Chhetri and Lionel Messi in the same breath is more than a little odd is what the talismanic Indian striker himself felt once or twice.

On Sunday, he went past the Argentine superstar in the list of goals scored by an active footballer on the international arena, leading, as he has so many times done, his country to its first win in the AFC Asian Cup since 1964.

He was modesty personified after going past (in terms of goals scored at least) one of the modern day's greatest footballers.

"Records don't matter, it doesn't matter who scores the goals. Whoever scores the jubilation was the same. I'm glad we got all three points," Chhetri said after the sensational 4-1 result against Thailand, the team that featured three J-League players in its ranks.

The 34-year-old Chhetri scored a world-class goal -- his second of the game -- but he preferred to talk everything else but his strike, which became a talking point for Indian football fans.

"I can think about my goals some ten years later," he maintained post-match.

"At the moment, we need to focus. The goals need to come and it just doesn't matter who scores," he stated.

"You can see the jubilation and happiness whenever someone scores. I am so happy for the boys. Every one of them ran and defended for their lives."

Playing in his second Asian Cup and 105th match, Chhetri scored in the 27th (penalty) and 46th minutes for his 66th and 67th goals to become the second highest international scorer.

With 85 strikes from 154 games, only Portugal superstar Cristiano Ronaldo remains ahead of the Indian at the moment.

But Chhetri would rather talk about the difficult upcoming engagements.

"It's a tough pool when we started thinking, we felt that all the others were more experienced and better than us. But the manner the boys fought, it shows a lot of character. I have said this before, we are a very difficult team to play against," he maintained.

"We may not be the most technical team but we will fight till the end, and that's what the boys showed.

Looking at the statistics and the goal-scoring comparisons between him and them (Messi and Ronaldo), Chhetri had said last year, "It's not even fair. The two players who are above me are completely world stars. I am a big fan of Messi and Ronaldo. There is a massive difference between them and us.

here is no comparison at all."
On Sunday, after his team's convincing victory, Chhetri was all praise for the passing abilities of Thailand.

"They were very good with the ball. We saw that in the first half. We knew that if we allowed them space they would just be passing around the whole park and we may not even touch the ball. So we stayed close.

"The goals came in the right times and it helped a lot."

On the many fans that turned up to back the Indian team, he said, "The onus was on them... We expect so much from them, they have made us so used to all the support. I hope in the coming matches also we can give them things to cheer."