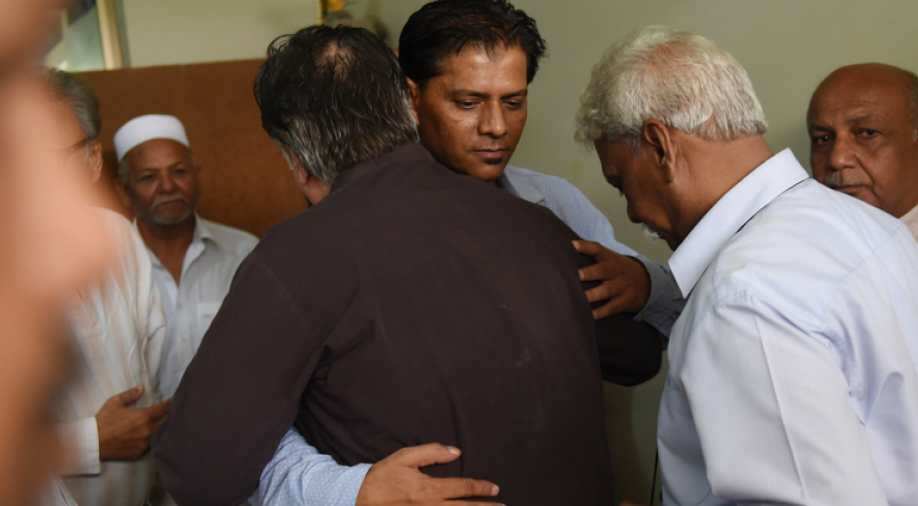 Abdul Aziz, father of Sabika, a student who was killed in mass shooting at a US school in the Texas town of Santa Fe, meet with relatives in Karachi, Pakistan. Photograph:(AFP)
Follow Us

Abdul Aziz learned about the US school shooting in which his 17-year-old daughter was killed from CNN, with the story airing live as he broke his Ramadan fast thousands of miles away in Pakistan.

In those chaotic first moments of confusion and terror he called his daughter Sabika Sheikh's phone over and over. She did not answer.

"I kept calling her and sent her messages on WhatsApp. Never before had my daughter failed to reply," Aziz told AFP, fighting back tears at his home in the southern port city Karachi Saturday, just hours after he and his wife had their worst fears confirmed.

"We are still in a state of denial. It is like a nightmare," said Aziz. His wife sat nearby, visibly still shocked and seemingly unable to speak as friends and relatives tried to comfort her.

Sheikh, an exchange student at the Santa Fe High School in Texas, was killed along with nine others after a heavily armed student opened fire on his classmates Friday.

It was the latest school shooting to rock the US, and came just three months after the massacre in Parkland, Florida, in which 17 people were killed, sparking an unprecedented grassroots, student-led gun control movement.

In Pakistan, the Santa Fe shooting has unleashed an outpouring of sympathy and horror over the tragic murder of Sheikh, who had been in the US for 10 months and was just weeks away from coming home.

Sheikh's father said she had always excelled in school, and had dreamed of serving in Pakistan's foreign office.

She had been due to return to Karachi in time for Eid al-Fitr, one of Islam's most revered holidays, marking the end of the holy fasting month of Ramadan, in which families come together and celebrate with days of feasting.

"She was coming back soon," her father said.

"There is a general impression that... life is safe and secure in America. But this is not the case."

The alleged gunman -- Dimitrios Pagourtzis, who at 17 is the same age as Sheikh -- was later apprehended by police and is being held on capital murder charges, meaning he could face the death penalty.

Police have yet to release details about a possible motive.

It was the 22nd school shooting this year, according to US media reports, a disturbing statistic in a country where firearms are part of everyday life and there are more than 30,000 gun-related deaths annually.

The news that a Pakistani exchange student was among the dead appeared to break through the now-routine outpouring of grief on social media after such killings, with US celebrities joining Pakistanis in expressing their sorrow

"This little girl could've been my daughter. We must do more than just console the parents of these murdered kids," said American actress Mindy Kaling on Twitter, along with a picture of Sheikh in a post online.

Some Pakistanis, for whom militant violence is all too familiar, branded the killing "terrorism".

"My heart is crying for #SabikaSheikh we have lost our brightest asset because of terrorism," tweeted Malik Rohaina, from the southern Pakistani city of Hyderabad.

Despite perennially rocky relations between Washington and Islamabad, the US has long been a favoured destination for Pakistani students studying abroad, with thousands enrolling in American schools every year.

Sheikh was in the US on a State Department-sponsored exchange programme.

Expressing his "deepest condolences" to her family and friends, Secretary of State Mike Pompeo said in a statement that Sheikh was "helping to build ties between the United States and her native Pakistan".

"Sabika's death and that of the other victims is heartbreaking and will be mourned deeply" in both countries, he added.

Even as he mourned the loss of his daughter, Aziz said he hoped the tragedy would not frighten fellow Pakistanis from following her lead.

"Such incidents should not make people lose heart... and one should not stop going to the US or UK or China or anywhere," said Aziz.

"One must go for education undeterred."