On Earth Day, see terrifying before and after images of how climate change is affecting the planet

Every year on April 22, people across the world observe World Earth Day to raise awareness on the environment and how to protect the Earth.

It was first celebrated in 1970 in the United States when around 20 million people took to the streets to protest against the 1969 Santa Barbara oil spill. Since then, the occasion has played an important role in raising awareness on other environmental issues.

Notably, the Paris Agreement, which was signed by nearly 200 countries to set a common target to reduce global greenhouse emissions, was signed on Earth Day in 2016.

However, far from it, despite warnings issued by the UN, several countries have failed to uphold their climate targets. Carbon pollution has already pushed the planet into unprecedented territory, ravaging ecosystems, raising sea levels and exposing millions of people to new weather extremes.

NASA's Earth Observatory Satellite has captured the climatic changes that have taken place across the world, which is set to raise an alarm. 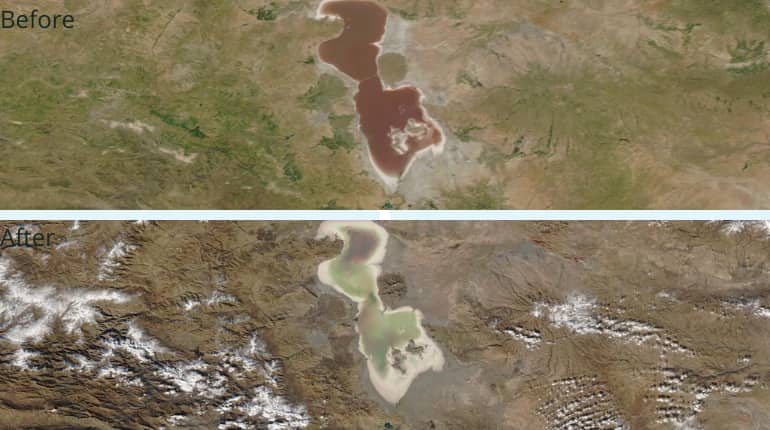 Iran's Lake Urmia is one of the world's largest hypersaline (extremely salty) lakes. It has been declared a Wetland of International Importance and a UNESCO Biosphere Reserve. But as reported by the United Nations Environment Programme, its water level began to decline rapidly in the mid-1990s. Incoming water was diverted for agricultural use, dams blocked inflowing rivers, rainfall decreased, and rising temperatures brought increased evaporation. Torrential rains in 2018 and 2019 helped to replenish the lake, as seen in the June image, which shows Urmia largely filled with water tinted red by bacteria or algae. But by the time of the November image, the lake was once again drying out. 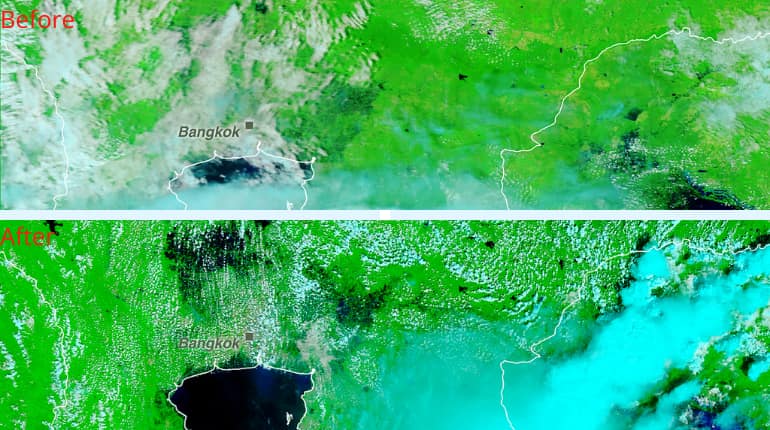 Heavy monsoon rains, following on the heels of tropical storms Dianmu and Kompasu, triggered landslides and flooding in Thailand in October 2021. According to Thailand's space agency, some 5,200 square miles (13,600 square kilometres) were inundated as of Oct. 19, affecting more than a million people. In these false-colour images, water appears dark blue or black, saturated (thoroughly soaked) soil is light blue, vegetation is bright green, bare ground is tan, and clouds are white or turquoise 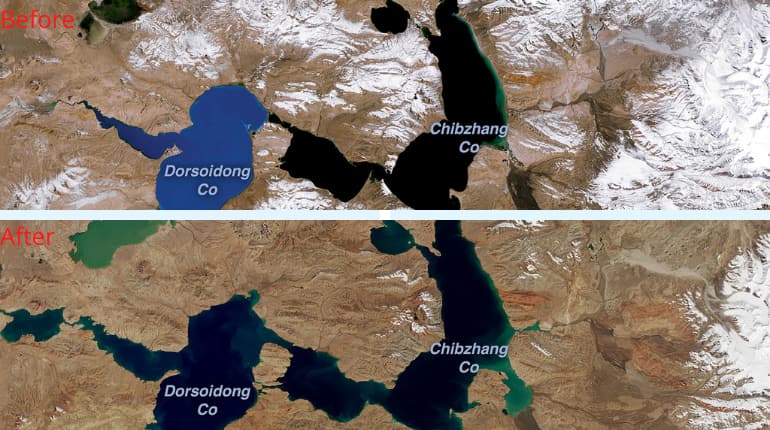 The Tibetan Plateau, home to tens of thousands of glaciers, is very sensitive to climate change. Water from melting glaciers has created hundreds of new lakes and enlarged existing ones, such as the main pair shown here. The 1987 image was taken when Dorsoidong Co (left) was still separated from Chibzhang Co by a thin strip of land. A greater abundance of suspended silt in Dorsoidong Co is likely responsible for the color difference. As the water in the two lakes rose, it eventually covered the barrier, merging the lakes by the time of the 2021 image 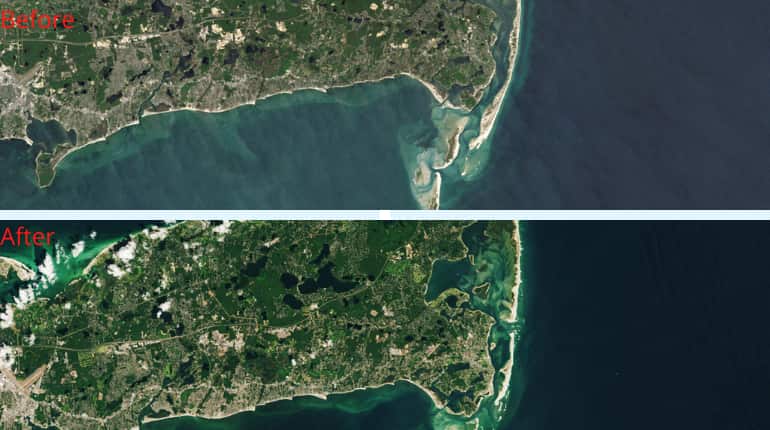 The southeastern coast of Cape Cod, Massachusetts, changes constantly under the influence of currents, tides, waves, and storms. For example, in the 1984 image, the barrier spit (the long, narrow strip at the eastern edge) known as North Beach is unbroken. The Patriot's Day storm in 2007 cut an inlet through it, and the southern part became North Beach Island. Researchers have identified a cycle that repeats roughly every 150 years, in which the barrier is breached, regenerates, stretches southward, and is breached again. The lower islands, too, reform under the ever-changing conditions. 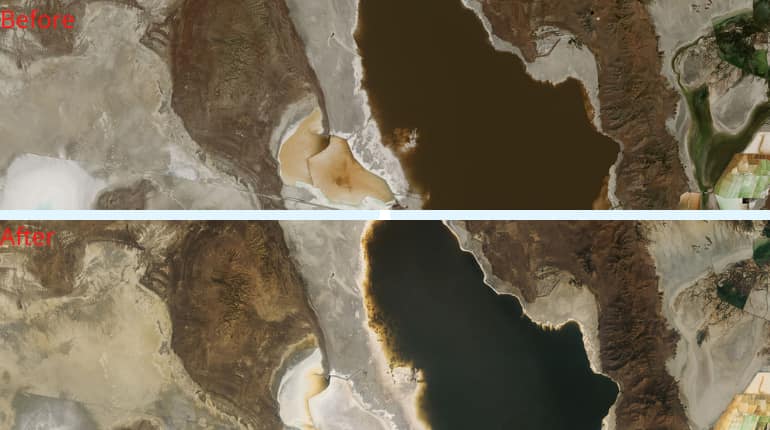 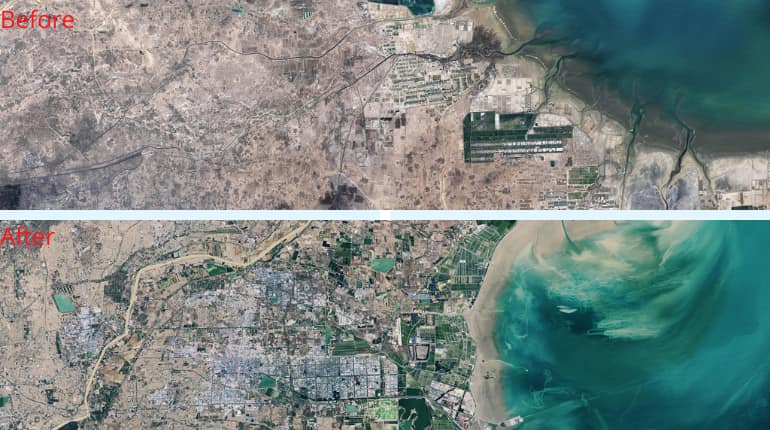 As China's Huang He (Yellow River) flows into the Yellow Sea, large amounts of sediment drop to the shallow seabed, building up a landform known as a delta. In 1996, Chinese engineers blocked the main channel, which had created the peninsula on the right of the 1989 image, forcing the river to veer northeast. By the time of the 2020 image, erosion and settling caused the tip of the old delta to retreat, while a new one formed to the north. At the same time, the population of the city of Dongying swelled from 378,000 in 1989 to 1.3 million in early 2021, with a corresponding increase in infrastructure 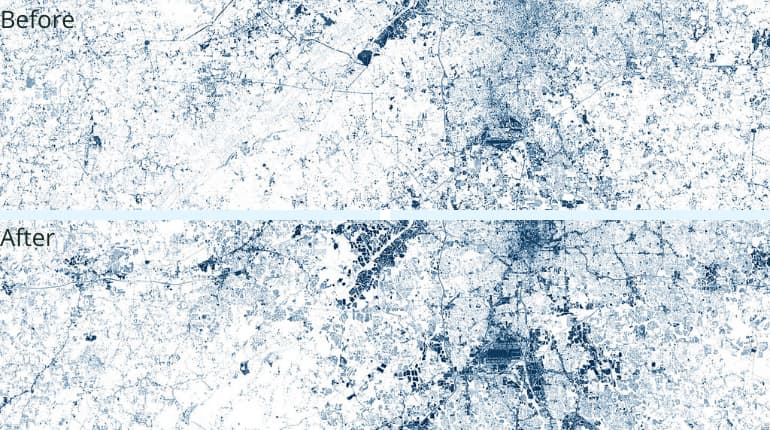 In a reversal of the "Great Migration" north of the early 20th century, people from the Northeast and Midwest have been moving to Atlanta, Georgia, making it one of the fastest growing metropolitan areas in the U.S. These false-colour images have been processed to emphasize the contrast between urban and forested or rural areas. Much of the new development visible in the 2020 image is relatively distant from downtown Atlanta. 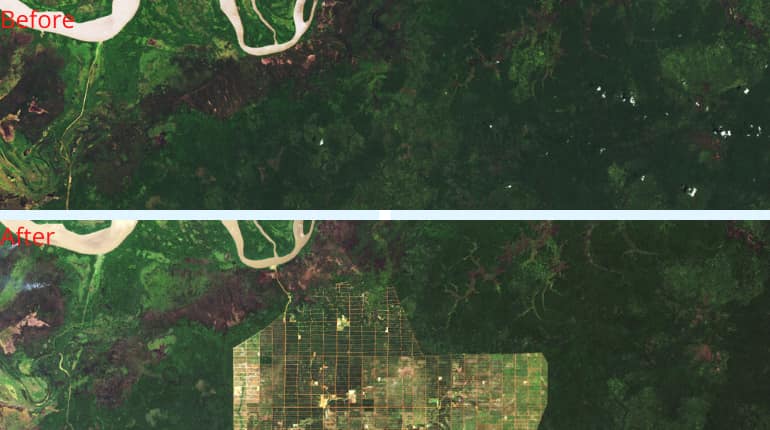 The 2019 image shows an area of Papua (also known as Western New Guinea) where the forest was cleared between 2011 and 2016, reportedly to make way for plantation agriculture. 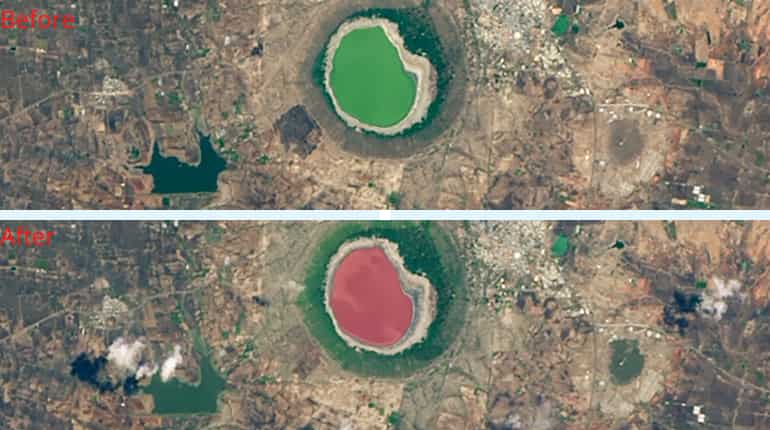 Over the span of a few days in June 2020, Lonar Lake in west-central India changed from green to pink. Warm, dry weather had evaporated a significant amount of the lake's water, leaving salts behind. Scientists speculate that with the increased salt concentration, a rapid rise in the numbers of salt-loving microorganisms caused the color change. A similar phenomenon happens periodically in Iran’s Lake Urmia and many Russian lakes when hot weather shrinks the lake and the water grows saltier.