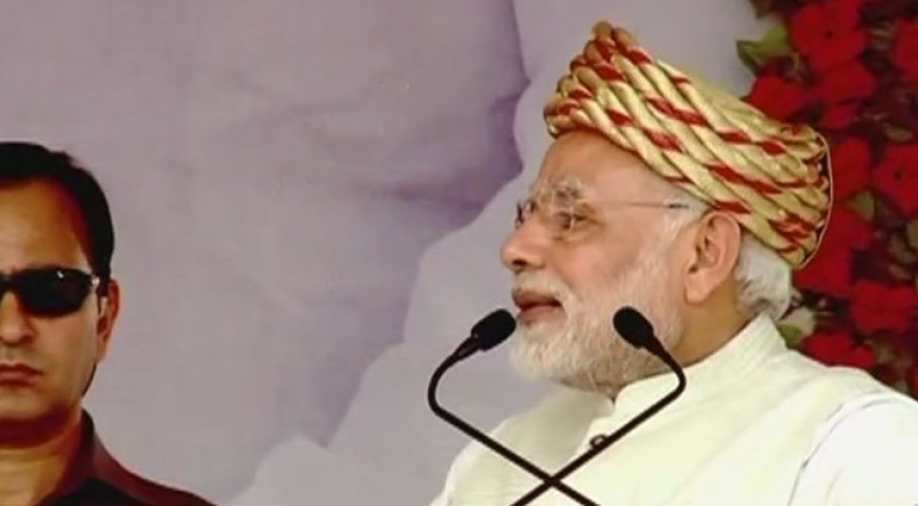 The BJP has since won the local UP polls, winning 14 of 16 seats. The other two seats were won by the BSP. Photograph:( ANI )

Prime Minister Narendra Modi said Sunday that he had said a few days ago that the results of three elections were certain -- the Gujarat polls, the local UP polls, and the Congress President elections.

A few days ago I said said there are 3 polls whose results are certain- UP local polls, Gujarat polls where I said BJP will win and the INC President election where 1 family will win. We saw what happened in UP: PM Narendra Modi in #Gujarat's Surendranagar pic.twitter.com/rGrnQQijRL

Modi was campaigning in Surendranagar in Gujarat.

In the morning he had spoken at Bharuch, where too he had attacked the Congress.

The BJP has since won the UP municipal polls. It won 14 seats -- including the Gandhi bastion of Amethi -- out of 16, with the remaining two being picked up by the BSP.

The Congress and the SP failed to win any seats.

In Surendranagar, Modi also mentioned how the secretary of the Maharashtra Congress had recently said the elections for the Congress President were rigged.

A youngster Shehzad has exposed the rigging that is taking place in the Congress president poll. Shehzad is a senior Congress leader in Maharashtra. Congress has tried to muzzle his voice and wants to even remove him from their social media groups. What tolerance is this: PM Modi pic.twitter.com/Uy0w4hGcVh

Those who have no internal democracy can't work for people. I want to say to this youngster Shehzad- you have done a brave thing but this is sadly what has always happened in Congress: PM Narendra Modi in #Gujarat's Surendranagar pic.twitter.com/ittZiKjNu6

Modi added that "125 crore Indians are my Gods and I am serving them."