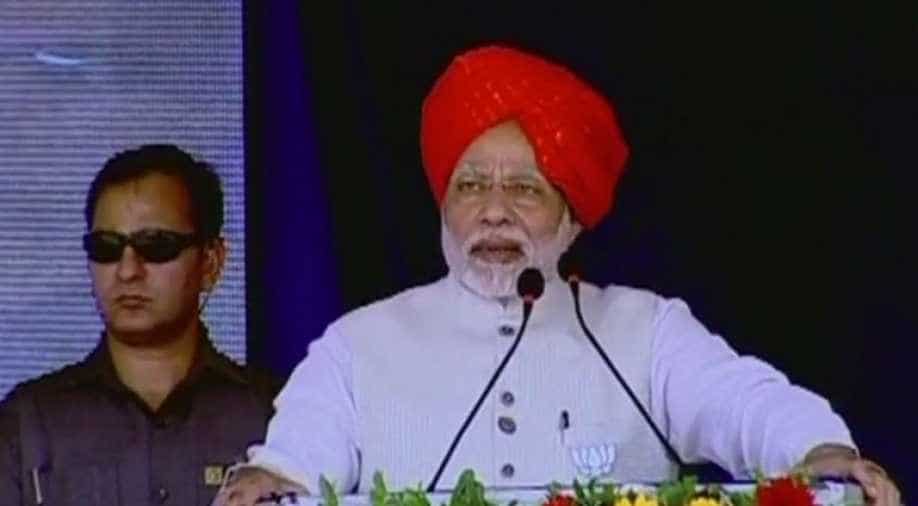 'My problem with Congress politics is simple -- they oppose us just for the sake of opposing,' Modi said.?'They oppose things like (the) bullet train only because they could not take this initiative forward and are envious someone else is.' Photograph:( ANI )

Prime Minister Narendra Modi, who is campaigning in Bharuch in Gujarat for the upcoming state elections, said Sunday that Bharuch and Kutch have significant Muslim populations -- and that they developed rapidly under the BJP.

He then went on to attack the Congress.

"Do you remember the poor law and order situation in Bharuch when Congress was in power?" Modi asked. Adding, "Curfews and violence was common here. BJP changed this, not only in Bharuch but all over Gujarat."

"My problem with Congress politics is simple -- they oppose us just for the sake of opposing," he said.

"They oppose things like (the) bullet train only because they could not take this initiative forward and are envious someone else is," he added.

He also referred to the recent municipal elections in Uttar Pradesh where the BJP won 14 of 16 seats. The remaining two seats were won by the BSP, with the Congress and SP failing to win any.

The Congress also lost the Gandhi bastion of Amethi.

In UP, where Congress ruled for decades, the state from where generations of top Congress leaders belong. We saw what happened there in the local elections. Congress was wiped out. UP knows the Congress well and so does Gujarat: PM Narendra Modi in Bharuch #GujaratElection2017 pic.twitter.com/sttfzaJXgp

When there were floods in Banaskantha, Congress leaders were in Bengaluru to save 1 leader from losing a Rajya Sabha poll. That same leader is topmost Congress leader but what did he do for Bharuch? He was unable to work for Narmada,neither did he think about ro-ro ferry: PM Modi pic.twitter.com/CMJK0nqUxk