G Kishan Reddy: Telangana MP who rose through the ranks 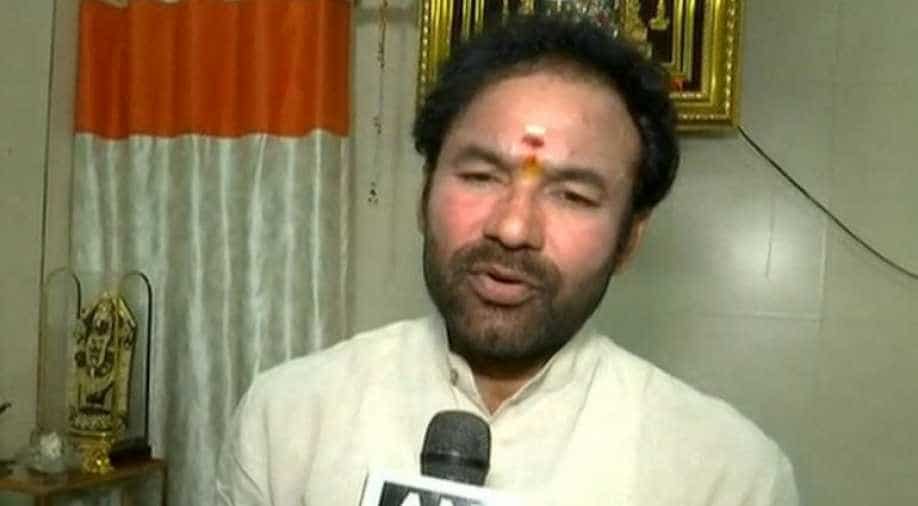 Reddy, who started his political career in 1977 as an ordinary worker with the Janata Party, had served as president of BJP in undivided Andhra Pradesh and Telangana and also as national president of BJYM, BJP's youth wing.

Bharatiya Janata Party (BJP) MP from Telangana G Kishan Reddy, who was sworn-in as a Minister of State, is a leader who rose through the ranks.

The BJP leader won the Secunderabad Lok Sabha seat in Telangana by a comfortable margin.

Reddy, who started his political career in 1977 as an ordinary worker with the Janata Party, had served as president of BJP in undivided Andhra Pradesh and Telangana and also as national president of BJYM, BJP's youth wing.

He also functioned as the party's floor leader of Andhra Pradesh Legislative Assembly.

Born in 1960 in neighbouring Ranga Reddy district, Kishan Reddy was inspired by Lok Nayak Jayaprakash Narayan and RSS leaders before he plunged into public service.

After working with Janata Party as an activist, he joined the BJP when it was formed in 1980.

Reddy's growth in the saffron party was gradual and he was appointed as the president of BJYM in 2002 when the party was in power at the Centre.

Reddy formed the World Youth Council Against Terrorism (WYCAT), an apolitical organisation, when he was the president of BJYM.

He organised a World Youth Convention under the auspices of WYCAT in New Delhi in which delegates from over 50 countries participated.

He conducted a 'Seema Suraksha Jagran Yatra' with the objective of expressing solidarity with the people living in border areas.

Reddy contested Assembly polls for the first time in 2004 (from Himayatnagar in Hyderabad) and got elected. His work won him laurels though he was the only MLA for his party then.

After delimitation of constituencies, he was subsequently elected to the Assembly from Amberpet constituency in the city in 2009 and 2014.

He, however, lost the Assembly elections held in December 2018, the first in Telangana after its formation.

With sitting Lok Sabha member and former Union Minister Bandaru Dattatreya being denied the ticket, Kishan Reddy was chosen by the party to contest from Secunderabad in the recently held Lok Sabha polls.

Reddy also worked for social causes, including well being of children suffering from heart ailments. His effort, along with others, made the then government come up with a scheme to help such children.

He headed the Telangana Home Guards Association and undertook agitations, seeking equal treatment, respect and improvement in their living conditions.