Leonardo DiCaprio was not comfortable with Meryl Streep stripping for 'Don't Look Up'. Here's why 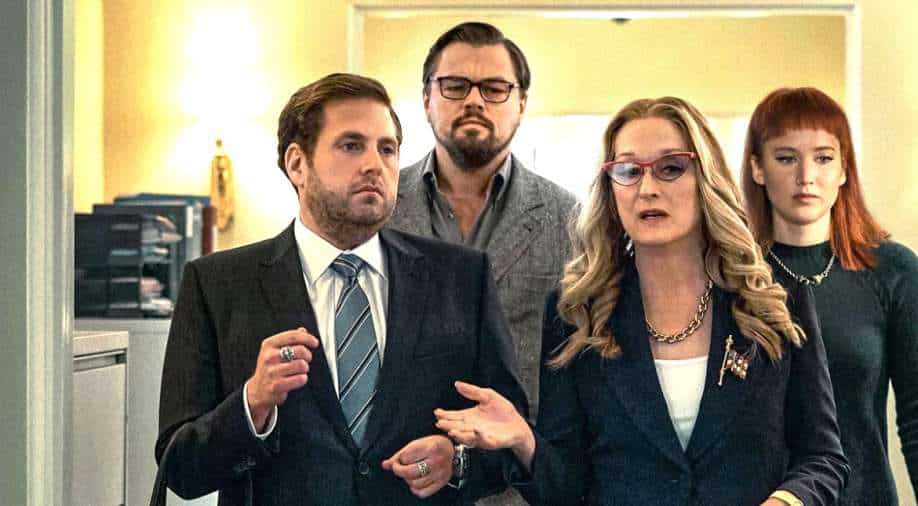 The stellar cast of 'Don't Look Up' Photograph:( Instagram )

Leonardo DiCaprio didn't want Meryl Streep to strip for a scene in 'Don't Look Up', revealed the director of the film Adam Mckay in a recent interview.

Leonardo DiCaprio didn't want Meryl Streep to strip for a scene in 'Don't Look Up'. The director of the film Adam McKay has revealed that a scene required Streep to strip down but DiCaprio felty the actress, 72, was too much of an icon to go nude in front of the camera.

In 'Don't Look Up', Streep plays President Janie Orlean and is seen naked from behind. The scene was shot with a body double but DiCaprio still felt uneasy about the idea.

"She is fearless," McKay recently told in an interview to The Guardian. "And yes, that is a body double. But you know who had a problem with it? Leo [DiCaprio]. Leo views Meryl as film royalty… although maybe royalty is not a compliment… but as such a special figure in the history of film."

Jennifer Lawrence is okay being paid less than Leonardo DiCaprio in 'Don't Look Up'. Here's why

"He didn’t like seeing her with the lower back tattoo, walking for a second naked," McKay added. "He said something to me like, ‘Do you really need to show that?’ And I was like, ‘It’s President Orlean; it’s not Meryl Streep.’ But she didn’t even blink. She didn’t even bring it up."

EXCLUSIVE! Jennifer Lawrence: I felt like a radio contest winner when I met Ariana Grande

DiCaprio and Streep have known each other for many years now and the veteran actress played his mother in 'Marvin's Room' in 1996.

DiCaprio recently revealed that the rest of the 'Don’t Look Up' cast was nervous to work alongside the veteran leading lady.

"You get to work with the greatest living actor in the world," DiCaprio shared. "Everyone’s on their toes. Everyone’s prepared, and we’re just trying to keep up with her."

The veteran star has been working in Hollywood for decades but has never done a full-frontal nude scene. In 1982, she was seen topless on a massage table in the film 'Still of the Night' but was covered with a towel.

The following year in 'Silkwood', Streep's character flasher momentarily at her co-worker in one scene. In 1995, she shot a sex scene with co-star Clint Eastwood in 'The Bridges of Madison County.'