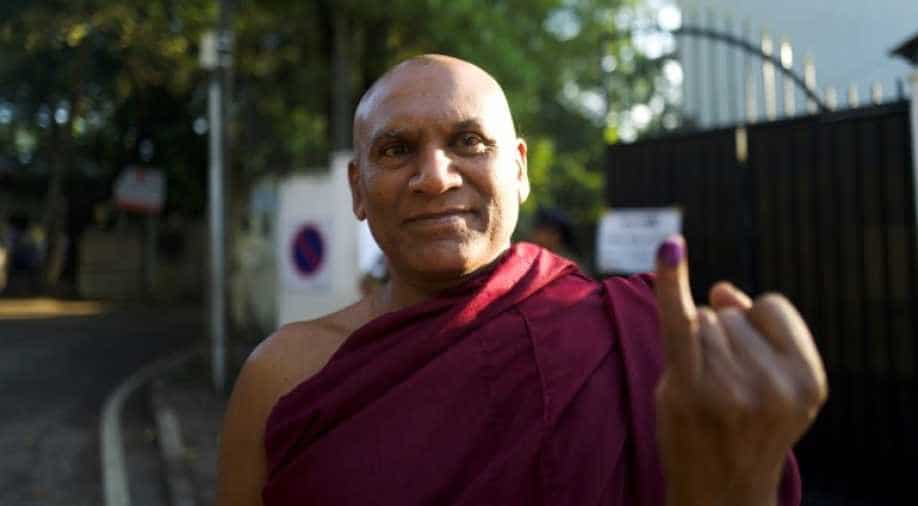 A monk after casting his vote in elections in Sri Lanka Photograph:( AFP )

Polling booths opened across the island at 7 am (0130 GMT) and voting would continue for 10 hours under tight security provided by 85,000 police, an election commission official said.

Sri Lankans began voting on Saturday for a new president in what could mark a comeback for the Rajapaksa clan, lauded by supporters for crushing the Tamil Tigers but condemned by critics for war crimes, corruption and cosying up to China.

Almost five years after political heavyweight Mahinda Rajapaksa lost power, his brother Gotabaya, 70, is running for the top job, promising development and security in the wake of Islamist extremist attacks that killed 269 people in April.

Polls opened at 0130 GMT and results could be known as early as midday Sunday if there is a clear winner. Security was tight with 85,000 police on duty, election officials said.

Just under 16 million people are eligible to vote, with a record 35 candidates, including two Buddhist monks but just one woman, on the monster ballot paper.

Even before polling stations opened, dozens of people were seen queueing up outside schools and public buildings where the 12,600 polling booths were set up.

"My appeal to voters is go to the polls as early as possible," Election Commission chief Mahinda Desahpriya said.

The Rajapaksas are adored by Sri Lanka's Sinhalese majority for defeating the Tigers and ending a 37-year civil war on the Indian Ocean island in 2009 in which around 100,000 people lost their lives.

For the same reason, the brothers are detested and feared by many in the Tamil minority, who make up 15 percent of the population, not least due to the way the conflict ended with some 40,000 Tamil civilians allegedly killed by the army.

During Mahinda Rajapaksa's presidency from 2005-15, Gotabaya was defence secretary and effectively ran the security forces, even allegedly overseeing "death squads" that used white vans to abduct, torture and in some cases kill political rivals, journalists and others.

The grey-haired retired army lieutenant colonel, dubbed the "Terminator" by his own family, denies the allegations.

"If Mr. Gotabaya Rajapaksa returns, the white van culture will return," Alfonso, a half-Tamil man living in Colombo, told AFP. "Nobody can speak against him. Nobody, not just us."

Many Muslims in the Buddhist-majority country of 21.6 million are also worried, having already witnessed increased hostility since the April attacks, including hundreds of homes and shops being trashed in the immediate aftermath.

After the civil war ended in 2009, Gotabaya "presided over the opening up of a new area of conflict, which was the Sinhalese majority versus the Muslims," analyst Paikiasothy Saravanamuttu told AFP.

"We had a number of incidents of violence against the Muslim community and Gotabaya was seen to be very much as a sponsor and supporter, particularly of an organisation called Bodu Bala Sena (Buddhist Power Force)."

What also concerns Western countries, as well as India, is that strategically located Sri Lanka moved closer to China under Mahinda, even allowing two Chinese submarines to dock in Colombo in 2014.

Sri Lanka was forced in 2017 to hand Beijing a 99-year lease on the port of Hambantota after being unable to service a $1.4-billion Chinese loan, highlighting for critics the debt dangers of the Belt and Road scheme.

An airport in the south has failed to retain a single international airline. Another white elephant is Colombo's unfinished "Lotus Tower", believed to be South Asia's tallest free-standing communications tower.

He added though that Gotabaya may have "learned some lessons from his brother's tenure; that he recognises the downside risks of backsliding on democracy and human rights, and of excessive dependency on China."

Western capitals "should give a fair chance to us," Basil Rajapaksa, another brother, told reporters. "They can't be monitors of this country. They must be partners."