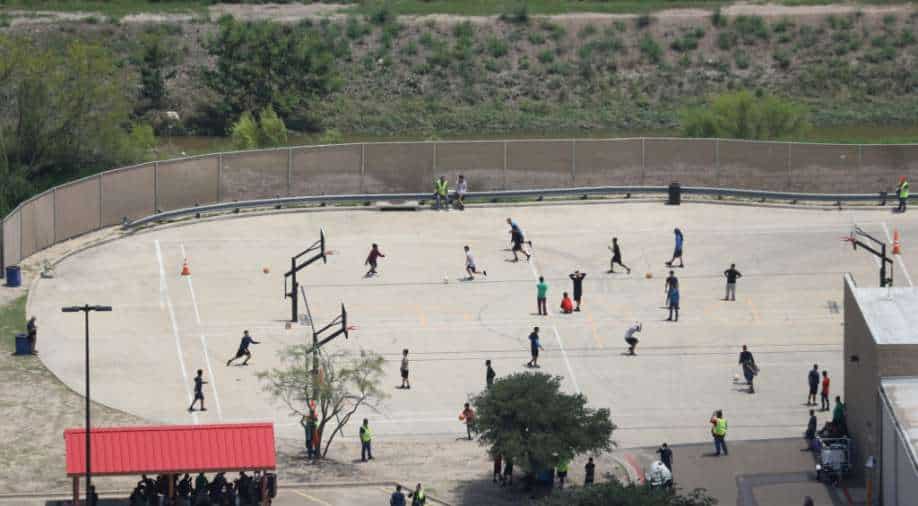 Migrant children in US Photograph:( Reuters )

The number of migrant children arriving at the southwestern border has increased in recent months, putting pressure on HHS-run shelters that house the children before they are released to parents or other sponsors in the United States.

The U.S. government is evaluating whether to house unaccompanied migrant children at a military base in Virginia amid a sharp rise in migrants arriving at the U.S.-Mexico border, according to a U.S. Department of Health and Human Services (HHS) notice seen by Reuters.

A Pentagon spokesman confirmed that Fort Lee, a U.S. Army facility about 30 miles (48 km) south of Richmond, was under consideration.

The number of migrant children arriving at the southwestern border has increased in recent months, putting pressure on HHS-run shelters that house the children before they are released to parents or other sponsors in the United States.

In the notice, HHS said it urgently needs to find more shelter space for unaccompanied minors. The department said it must "aggressively" find solutions for the rising number of children entering the country amid the COVID-19 pandemic.

The number of migrants caught crossing the border and allowed to enter the United States has increased in recent weeks, as U.S. President Joe Biden, a Democrat, has pledged to reverse many of the hardline policies of former President Donald Trump, a Republican.

U.S. officials are hurrying to find housing and speed up releases of a growing number of unaccompanied children arriving at the border after Biden exempted them in February from a Trump-era policy known as Title 42. That policy, issued on COVID-19-related public health grounds, allows U.S. authorities to rapidly expel migrants caught at the border.

Under U.S. law, children under the age of 18 caught crossing the border without a parent or legal guardian are labeled "unaccompanied" and must be transferred from Border Patrol facilities to HHS shelters within 72 hours.

The law outlines separate procedures for children from Mexico and Canada that allow them to be more easily removed from the country.

Most children arriving without a parent or legal guardian are from Mexico and Central America.

The United States has used military bases to house unaccompanied children during previous spikes in arrivals, including during a surge of unaccompanied minors in 2014 under former President Barack Obama.

The Biden administration also plans to convert two family detention centers in Texas into facilities that would quickly process incoming migrant families and allow them to be released within 72 hours pending the outcome of their cases, according to two people familiar with the plan.

HHS said that as of March 4 the agency had 7,700 unaccompanied minors in custody, the highest level since 2019. As of last week, it had roughly 7,700 beds available.

Unaccompanied children come to the United States to reunite with family members or escape violence and poverty in their home countries, according to experts. In some cases, children arrive at the border with an adult, such as a relative or family friend, but are deemed "unaccompanied" because they are traveling without a parent or legal guardian.