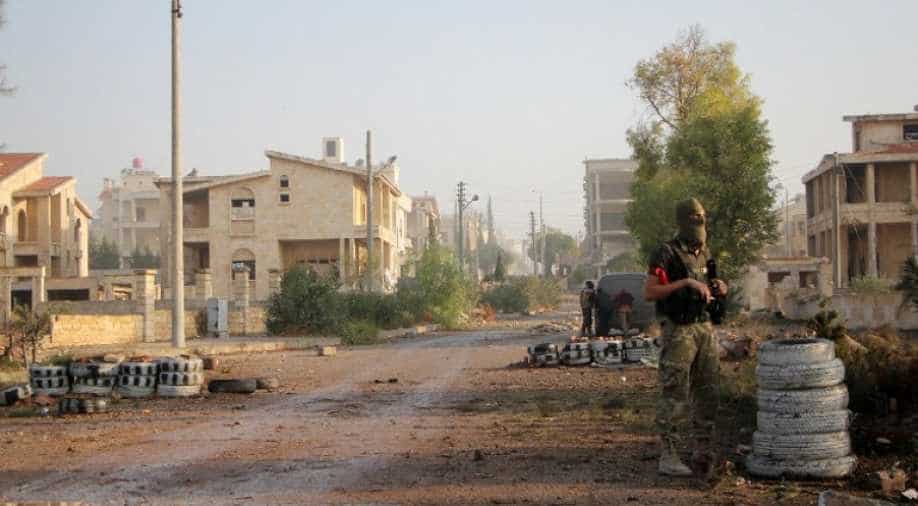 Aleppo has been devastated by fighting since the rebels seized east of the city in 2012. Photograph:( AFP )

A 10-hour Russian-declared ceasefire in rebel-held areas of Syria's Aleppo city came into effect on Friday. However, expectations were low that civilians or rebel fighters would take the opportunity to leave, AFP reported.

Syrian state media said rebels fired rockets at one of the eight evacuation passages open for civilians and rebels, and accused opposition fighters of preventing residents from fleeing.

Half-way through the 10-hour ceasefire, AFP correspondents in Aleppo said no one had used any of the passages Moscow said were open.

Russia's defence ministry told AFP two of its servicemen were "lightly wounded" in rebel shelling of a corridor intended for the evacuation of fighters.

Russia said the Syrian army had opened eight crossings on the front line for civilians to leave, two of which could also be used by surrendering rebel fighters.

Moscow ally Damascus said the purpose of the "humanitarian pause" was an attempt to "prevent senseless casualties."

The rebels, meanwhile, dismissed the latest ceasefire as a ploy by Moscow to deflect international criticism of the high civilian death toll from its bombing campaign.

"This announcement is worthless... We don't trust the Russians or any of their cheap initiatives," Yasser al-Youssef, a politburo member of the Nureddin al-Zinki rebel brigade in Aleppo told AFP.

Syria and Russia have accused the rebels of preventing civilians of leaving the city.

Civilians in the east, who have faced weeks of devastating bombardment by the government and its Russian ally, have expressed scepticism about the promises of safe passage.

Last month, a similar 72-hour ceasefire ended with only a handful of people leaving the eastern part of the city which has been devastated by fighting ever since it was seized by rebels in 2012.

In July, the Syrian army cut the last supply route from other rebel-held territory, leaving the more than 250,000 civilians still living in the east without access to basic goods.

The Syrian army, backed by Russian forces, stepped up its  offensive to recapture the rebel-held sector in September, killing hundreds.

The rebels, who launched  an attempt to break the siege last week, have intensified their efforts since Thursday, AFP reported.

The rebels captured the Dahiyet al-Assad neighbourhood and the village of Minyan outside west Aleppo, the Syrian Observatory for Human Rights said.

The latest deaths brought to nearly 70 the number of civilians killed in government-held areas since the rebel offensive began, the Britain-based monitoring group said.

An AFP correspondent in east Aleppo said the front lines were quiet on Friday morning after fighting halted during the night.

The Russian defence ministry posted what it said were live feeds from three of the crossings. One showed barrels painted with the Syrian flag next to a large photograph of President Bashar al-Assad propped up by sandbags. Another showed waiting ambulances while the third --- which appeared to be filmed from a drone --- showed a line of green coaches, AFP reported.

The United Nations, which has repeatedly expressed concern over the situation in Aleppo, said it would not be attempting any medical evacuations from the rebel-held sector during Friday's ceasefire. UN agencies tried but failed to organise evacuation convoys during last month's pause.

"The UN will not be involved in any way in the evacuation of civilians from east Aleppo related to this announcement," said David Swanson, a spokesman for the UN humanitarian office.

"Medical evacuations can only take place if parties to the conflict take all the necessary measures to provide an enabling environment, which hasn't happened," he told AFP. "We remain very, very concerned about the humanitarian situation in east Aleppo. There have been no humanitarian supplies reaching the east of the city since early July."

The death toll has drawn international condemnation of both Damascus and Moscow. The European Union said Russian actions "may amount to war crimes".

More than 300,000 people have been killed in Syria since the conflict erupted with anti-government protests in March 2011.