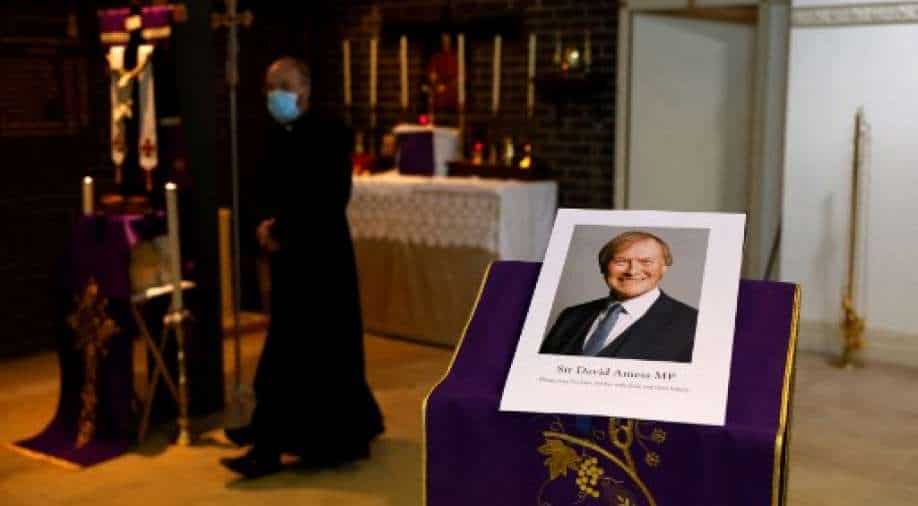 The killing has sent shockwaves around Britain Photograph:( AFP )

The Metropolitan Police, whose counter-terrorism unit are leading the investigation of the incident, in a statement early on Saturday said that an initial investigation revealed the 'potential motivation linked to Islamist extremism'

The British Police has termed the death of UK Conservative lawmaker David Amess, who was knifed to death outside the Essex church, as a “terrorist incident”.

The Metropolitan Police, whose counter-terrorism unit are leading the investigation of the incident, in a statement early on Saturday said that an initial investigation revealed the “potential motivation linked to Islamist extremism.”

“As part of the investigation, officers are currently carrying out searches at two addresses in the London area and these are ongoing,” Reuters quoted the police as saying, while adding that it is believed that the suspect in custody acted alone.

A 25-year-old man was arrested at the scene on suspicion of murder and a knife was recovered from him.

Essex police said officers had responded “within minutes” to reports of the stabbing shortly after 12:05 pm (1105 GMT) and arrived to find Amess had “suffered multiple injuries”.

“This was a difficult incident, but our officers and paramedics from the East of England Ambulance Service worked extremely hard to save Sir David,” Essex Police Chief Constable Ben-Julian Harrington told reporters.

"Tragically he died at the scene."

A father-of-five who was first elected to parliament in 1983, Amess was memorialised with an impromptu evening mass while tributes poured in from across the political spectrum and around the world. He was knighted by Queen Elizabeth for his public service in 2015.

The killing has sent shockwaves around Britain.

Flags were lowered to half-mast in Westminster as tributes were paid to Amess, whose death came five years after the murder of Labour party MP Jo Cox by a far-right extremist.

"David was a man who believed passionately in this country and in its future and we have lost today a fine public servant and a much loved friend and colleague," said Prime Minister Boris Johnson, who rushed back to London from the west of England after the news broke.

In Amess' last contribution to the House of Commons last month, he asked for a debate about animal welfare.

Residents left flowers beside the church with a tribute: “David Amess RIP Such a gentleman.”