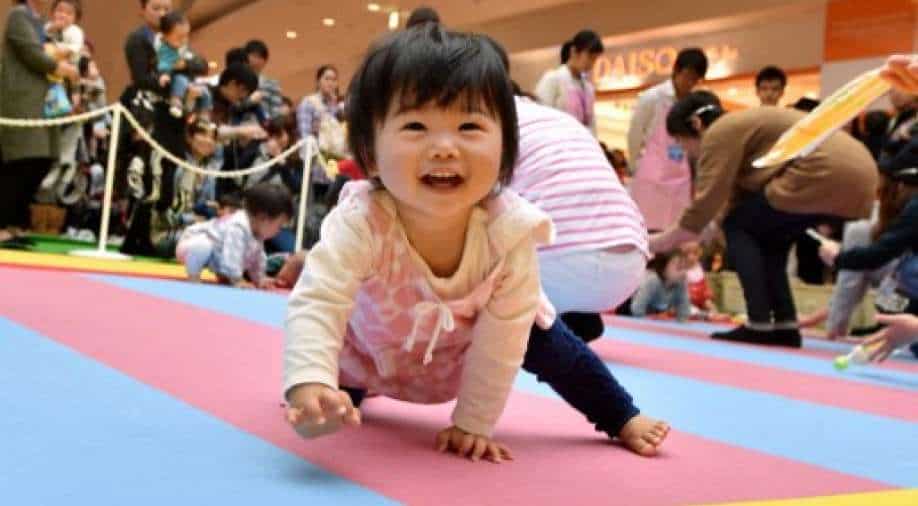 Babies compete in a baby crawling competition hosted by a Japanese magazine that specializes in pregnancy, childbirth and child-rearing, in Yokohama Photograph:( AFP )

According to data released by the Japanese government, the number of newborn babies fell to a record low as the coronavirus pandemic hit the country last year.

The government records also revealed that this year the birth rate could be worse with the number of newborns falling 9.2 per cent in the January to March period as the country battles the pandemic.

The number of births in the country has been falling since 1973 with the age of mothers also increasing in recent years who have given birth to a child between the age of 30 to 34 years at a record high of 303,434 with the average age at the time of the first child being 30.7 years.

The country has the highest number of elderly population in the world with a decline in population witnessed in 2011. According to an EU Parliament report on Japan's demographics at least 28 per cent of the population is 65 or older with the country failing to raise its fertility rate to meet the replacement level in its workforce.

Japan has been described as a "super-aged society" in the EU report with at least one in three women in Japan aged 65. In 2017 there were 2 million people over the age of 90 in the country with the figure expected to rise to 440,000 by 2050, the report said with approximately 88% of Japan's centenarians being woman.

The EU report points out that one of the main reason for the lower birth rate is the fact that men find fewer life long job opportunities which affect their marriage prospects since a woman in Japan seek men with stable jobs.