Merkel, Schulz at home base on final campaign push 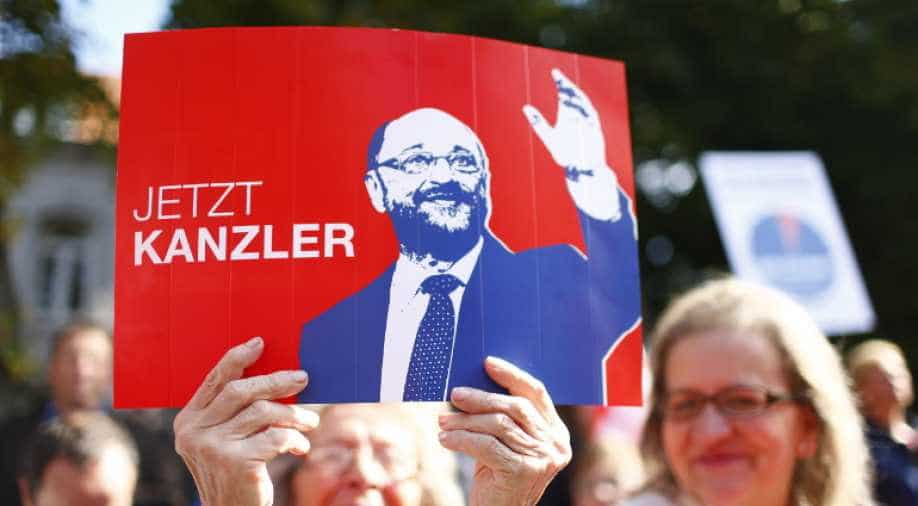 Merkel will end her punishing campaigning schedule in her Baltic coast constituency Saturday. || ||Social Democrat chief Schulz meanwhile will take his rally to Aachen, a western city next to his hometown of Wuerselen.

Chancellor Angela Merkel and her main rival Martin Schulz return to their home bases to make their last-ditch appeal for votes ahead of Sunday's elections, urging Germans to shun anti-migrant populists.

Merkel will end her punishing campaigning schedule in her Baltic coast constituency Saturday.

But far from heading to districts where her Christian Democratic Union enjoys its strongest support, she is visiting districts in the town of Greifswald and the island of Ruegen where the Islamophobic Alternative for Germany topped her party's score in state elections last year.

Social Democrat chief Schulz meanwhile will take his rally to Aachen, a western city next to his hometown of Wuerselen.

Although Merkel's party enjoys a double-digit lead over the second place SPD, alarm is growing among mainstream parties as the latest polls show support for the hard-right AfD rising in the final campaigning stretch to between 11 and 13 percent.

That means that around 60 lawmakers of the openly anti-immigration party could sit in the German parliament for the first time since World War II, a prospect prompting established parties to urge voters to shun the upstarts.

( Also Read: Germany elections: Main parties, their ideologies and who is likely to win? )

'Shame for our nation'

At Merkel's final major stump speech on Friday evening at the southern city of Munich, dissenters blew whistles and vuvuzelas and chanted "get lost", seeking to drown her out.

But the 63-year-old refused to be derailed from her stability-and-prosperity stump speech, telling the crowd that "the future of Germany will definitely not be built up through whistles and hollers."

Merkel, whose rallies across Germany had been plagued by organised AfD supporters, also called people to go out and "vote for the parties that are 100 percent loyal to our constitution".

In an appeal for voters to close ranks and keep the AfD out, Schulz told a rally in central Berlin that "this Alternative for Germany is no alternative. They are a shame for our nation."

"For the first time since the end of the Second World War, real Nazis will sit in the German parliament," said Gabriel.

Two months of campaigning have been largely low-key, with few hot-button issues dividing the main contenders.

While Merkel has been pushing her stability and prosperity agenda and Schulz seeking to sway voters with his pledges for greater social equality, the AfD has diverted attention.

Sueddeutsche Zeitung columnist Heribert Prantl praised the chancellor for not only pressing on with her rallies despite protests from AfD supporters but also giving a clear rebuttal to the populists.

But the columnist regretted that it only came late in the campaign when it became "clear how the political climate in Germany will change with the AfD in the Bundestag."

"Not only nationalist politicians, but racists and bigots too will enter parliament," he wrote, adding that "the seriousness of the situation was only recognised too late."

Thorsten Benner, director of the Global Public Policy Institute in Berlin, said the AfD "will challenge key themes" in parliament, warning that taboos since 1945 that could be breached include how Germany views its World War II past and the question of what makes a German.

One of two AfD leading candidates, Alexander Gauland, had called for Germans to stop atoning for the war past.

He had also sparked outrage when he said integration commissioner Aydan Ozoguz should be "disposed of in Anatolia", suggesting that she will never be German because of her Turkish origin.