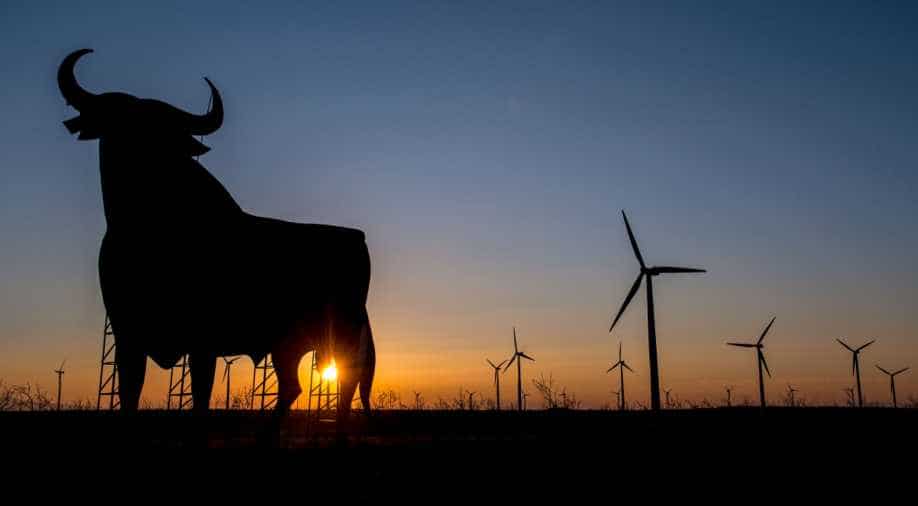 Wind turbines spin next to a giant bull advertisement for the Bodegas Osborne SA winery at a wind farm on February 19, 2015 near Zaragoza, Spain. Photograph:( Getty )

Pedro and Mohamed await every utility bill with much angst. To reduce the money they have to pay, they live in the dark, without heating, or shower just once a week -- victims like millions in Spain of energy poverty.

Welfare associations have for years warned against this situation, but the death earlier this month of 81-year-old Rosa in a fire caused by a candle she used for light has brought the issue firmly to the fore. Socialist lawmaker Pilar Lucio asked the ruling conservative government to immediately implement a "winter truce" on companies cutting power to those who cannot pay -- a measure with majority support in parliament and encouraged in a 2009 EU directive.

Last year, according to Spain's National Statistics Institute, 10.6 per cent of Spaniards were unable to properly heat their homes -- or more than four million people -- compared to just 5.9 per cent in 2008, when an economic crisis kicked off. At fault are the economic crisis and widespread loss of jobs it caused, as well as a 30- to 50-per cent rise in utility prices since 2006.

Pedro Martinez, 48, has been in this situation for several years. Unemployed since 2013, when the furniture company he was working for closed, he survives on a pension of 426 euros ($450) a month, and what remains of the compensation he received for being fired.

Divorced, he lives with his 20-year-old son and 23-year-old mentally impaired daughter in a working-class district of Barcelona, without heating and using electric light only when absolutely necessary.

"It's tough in winter. We just have an electric heater, which we rarely switch on for fear of the bill," he says. "The cold chills you to the bone. We wear coats and at night we use all the blankets we have."

Tere Bermudez, spokeswoman for the Roman Catholic charity Caritas, says that "for many families, water, light and gas are luxury items". She says that from 2007 to 2015, the organisation multiplied by 30 the number of utility bills it helped pay.

One of its beneficiaries is Mohamed Chairi, a 37-year-old Moroccan. Unemployed, his family lives off the monthly 250 euros from his wife's cleaning work as well as help from charities. "We shower once a week, on Fridays, so that the kids are clean at the weekend," the father-of-three says.

In the corner of the living room of his small flat in Badalona near Barcelona, his youngest son plays with a broken electric radiator. Chairi has just received his electricity bill -- 24 euros for the month, a small sum for Spain but huge for him. "The rent alone is 440 euros," he says. "If I have to suffer from hunger or go without light or water, I don't care, but the kids...".

According to the European Commission, Spain's gas and electricity prices were the third and fourth highest respectively in the European Union last year. "We are above the European average (in terms of fuel poverty) despite having much better weather," says Jose Luis Lopez, spokesman for the Association of Environmental Science. There is no nationwide law on the issue, but several regions have implemented measures to try and address it.

In the northeastern region of Catalonia, for instance, a law stipulates that utility companies must notify social services before cutting electricity or gas, and if the family or person struggling to pay is classified as vulnerable, they are banned from doing so. But the law is not always respected, as was the case for Rosa, with utility firm Gas Natural acknowledging it had not contacted social services.

Lopez estimates that some 7,100 people die every year due to fuel poverty. Firefighters in Catalonia have also warned of the security risks involved.

"We have come across people heating themselves with small fires made from newspapers or even canvas shoes," said union spokesman Antonio del Rio. Spain may be emerging from the crisis, but at least 600,000 households saw their electricity supply cut off last year, according to the Facua consumer association.

"There's a lot of talk about recovery, but on the street you don't see it anywhere," said Pedro Martinez.