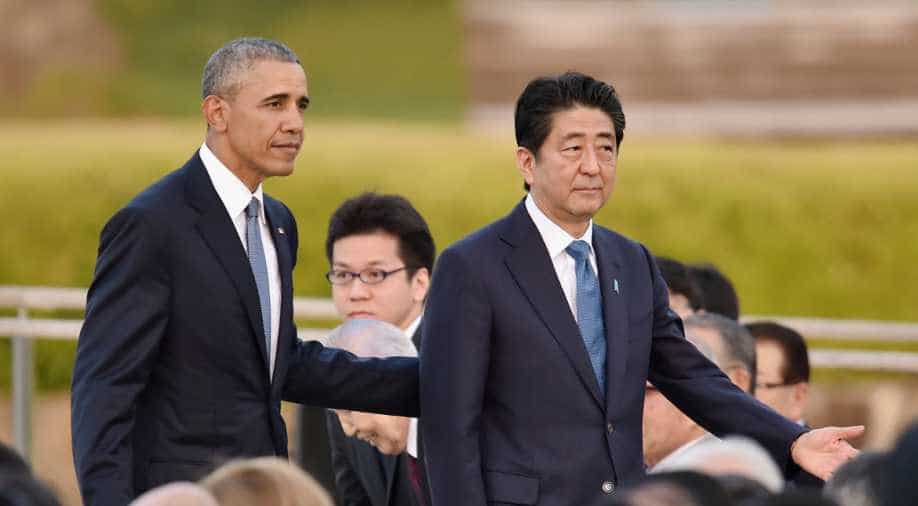 Abe is the first Japanese leader to go to the US Arizona Memorial, the wreck where 1,177 US personnel died. Photograph:( Getty )

Japan's Prime Minister Shinzo Abe arrived in Hawaii on Monday ahead of a symbolic meeting with President Barack Obama at the site of the Pearl Harbor attack.

Tuesday's visit comes 75 years after Japan's December 1941 attack on the base of the US Pacific fleet, drawing America into World War II. And it comes seven months after Obama and Abe made a joint visit to the Japanese city of Hiroshima, which was devastated by a US atomic bomb in 1945.

Before leaving Japan, Abe said he was to visit the Pearl Harbor memorial because: "We must not repeat the horror of war ever again."

"Together with President Obama, I would like to express to the world this pledge for the future and the value of reconciliation," he told reporters.

On December 7, 1941 a Japanese air armada descended on the Hawaiian naval base without warning, sinking much of the fleet and killing 2,400 people.

Washington had been hesitating about joining a war that had already plunged Europe into chaos, but the Japanese attack forced its hand.

The moving memorial, appearing to float above the rusting remains of the USS Arizona, attracts two million tourists, pilgrims and veterans every year.

The curved-roofed white building was put in place in the 1960s to memorialize what president Franklin Roosevelt dubbed the "day that will live in infamy."

Inside are engraved the names of crewmen who died in the attack.

Abe is not expected to formally apologize in the name of Japan but, as Obama did at Hiroshima, will celebrate today's friendship between the former foes.

Abe made no public remarks and stood in silence before a wreath of flowers at the National Memorial Cemetery of the Pacific, a memorial to people who died while serving in the U.S. Armed Forces.

Abe, joined by two of his Cabinet members, bowed his head before wreaths of white flowers and greenery laid at the feet of stone monuments at Makiki Cemetery in Honolulu dedicated to Japanese who settled in Hawaii in the 1800s.

Abe presented a wreath at the armed forces memorial located at Honolulu's Punchbowl Crater. Known colloquially as the Punchbowl, it is the final resting place for more than 13,000 American veterans of the war in the Pacific.

Abe will also pay tribute to the nine Japanese crew and students who drowned in February 2001 when the fishing vessel Ehime Maru collided with a US sub.

Japan hopes to present a strong alliance with the United States amid concerns about China's expanding military capability. Japan was monitoring a group of Chinese warships that entered the top half of the South China Sea earlier on Monday.

Japanese leaders hope to send a unity message as well to President-elect Donald Trump, who triggered concerns before his Nov. 8 election by opposing the US-led Trans-Pacific Partnership trade pact and threatening to force allied countries to pay more to host U.S. forces.