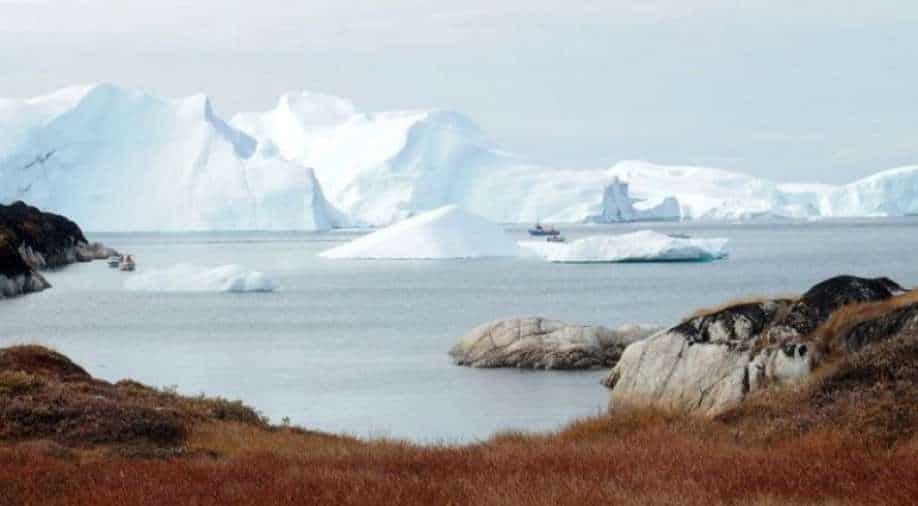 Fishing vessels are seen next to the icebergs near Ilulissat, Greenland (file photo) Photograph:( Reuters )

Writing in the journal Nature Communications, researchers said that Greenland's meltwater runoff had risen by 21 percent over the past four decades

The 3.5 trillion tonnes of Greenland's ice sheet that has melted over the past decade has raised global sea levels by one centimetre and is heightening worldwide flood risks, new research showed on Monday.

The ice sheet atop the world's largest island contains enough frozen water to lift oceans some six metres (20 feet) globally, and extreme melting events there have been increasing in frequency for at least 40 years.

Also Read | Some forests are now emitting more carbon dioxide than Oxygen. Here is why

Although it is one of the most studied places on Earth by climatologists, Monday's research is the first to use satellite data to detect Greenland ice sheet runoff.

Writing in the journal Nature Communications, researchers said that Greenland's meltwater runoff had risen by 21 percent over the past four decades.

More strikingly, the data provided by the European Space Agency showed that the ice sheet had lost 3.5 trillion tonnes of ice since 2011, producing enough water to raise oceans globally and put coastal communities at higher risk of flood events.

The images showed significant annual variation in ice melt and, combined with temperature data, showed that heatwaves were increasingly a major cause of ice loss above and beyond global temperature rises.

In 2012, for example, when changes in atmospheric patterns caused unusually warm air to hover over the ice sheet for weeks, 527 billion tonnes of ice was lost.

"As we've seen with other parts of the world, Greenland is also vulnerable to an increase in extreme weather events," said Thomas Slater, from the University of Leeds Centre for Polar Observation and Modelling and lead author.

"As our climate warms, it's reasonable to expect that the instances of extreme melting in Greenland will happen more often."

Predicting how much Greenland's melt will contribute to rising sea levels is notoriously tricky for scientists who also need to factor in the potential rise caused by other land-based glacier melt.

And, as oceans warm, water expands, and also contributes to higher seas.

Monday's authors said that the satellite data had allowed them to quickly and accurately estimate how much ice Greenland had lost in a given year, and convert that into sea-level rise equivalent.

"These new spaceborne estimates of runoff will help us to understand complex ice melt processes better... and just enable us to refine our estimates of future sea-level rise."