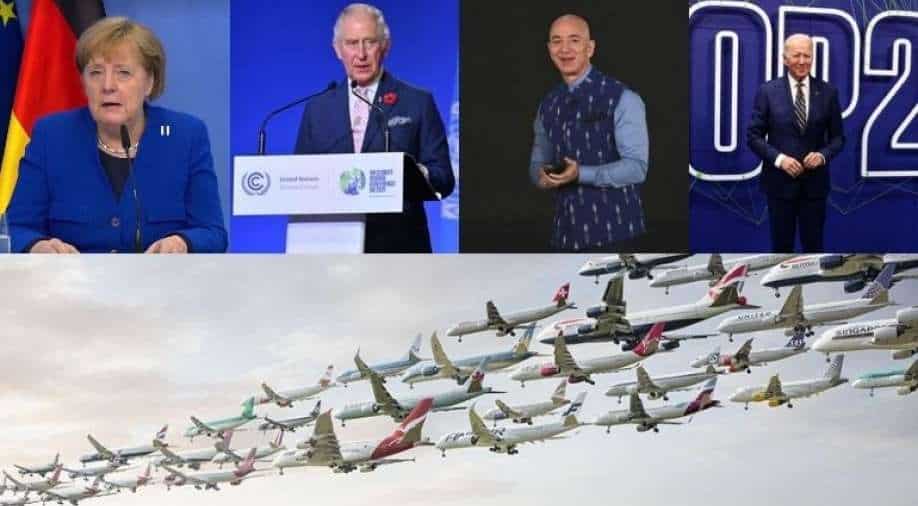 In their quest to save the planet from greenhouse gases, the top brass travelling to Scotland for COP26 will generate a staggering amount of emissions by using their private planes for the trip

In the midst of the world's fight against climate change and the UN's climate change summit, also known as COP26, beginning in Glasgow, several delegates arrived in private planes which spewed tonnes of CO2.

In their quest to save the planet from greenhouse gases, the top brass travelling to Scotland for COP26 will generate a staggering amount of emissions by using their private planes for the trip, reports claimed.

Also read | COP26: Why the world is worried about China and CO2 levels

According to reports, more than 400 private planes carrying business leaders and politicians to this week's conference will spew out 13,000 tons of CO2. Ironically, these bigwigs and their private jets' emissions will exceed the average annual emissions of roughly 1,600 Scots.

From Japan to the United States, to Israel to even the United Kingdom itself, world leaders and heads of state will be among those taking private jets.

Earlier today, US President Joe Biden arrived aboard Air Force One. The trip follows the president's trip from Washington to Rome for the G20 summit this weekend. Global leaders pledged "meaningful and effective" climate action at the G20 summit, but offered little information about how they will limit global temperatures from rising more than 1.5 degrees Celsius.

Also read | We can get real on coal, cars, cash and trees, UK PM Johnson warns world leaders at COP26

In the Vatican on Friday, while on his way to meet the Pope, Joe Biden deployed a massive motorcade, 85 gas-guzzling cars long parade to be exact. Today, according to reports, he had a similarly long entourage on his way from the airport to the summit venue.

Here comes Biden at the Vatican to meet with the Pope ahead of #COP26 . His personal vehicle convoy puts your carbon footprint into the shade for the next 20 years, such is the hypocrisy of this Willy Waving fiasco! pic.twitter.com/cnCAO1jJFv

Critics on the internet have blasted Biden and others for their exorbitant displays. A number of the participants at COP26 have been called out for claiming to fight climate change while not reducing their enormous carbon footprints.

"Every world leader or dignitary that arrives to @COP26 by private jet is an eco-hypocrite. Fact." writes Nigel Farage, former politician, Leader of the UK Independence Party in a Twitter post.

Every world leader or dignitary that arrives to @COP26 by private jet is an eco-hypocrite. Fact.

For their use of private jets to travel to Rome and Scotland, Prince Charles, the UK Prime Minister, Boris Johnson, are also among the leaders to have come under criticism. Earlier too, in June, Johnson raised eyebrows when instead of taking the train from London, he flew to Cornwall for the G7 summit.

Some other big names that are facing criticism include Jeff Bezos, Prince Albert of Monaco, and German chancellor Angela Merkel.

Netizens around the world have taken to Twitter to call out these "climate leaders." Check out some of the tweets:

Jet fuel powered Police aircraft circles Glasgow all morning whilst a private jet from Athens lands during the #COP26 conference. I’m sure this is helping pic.twitter.com/MQXLEiqh6m

If there is a climate change 1 minute before midnight disaster conference there is every chance that private jets will lead the parade. pic.twitter.com/VDYPOIjvPC

#COP26 we're addicted to fossil fools alright they're all running the world into ruin!! How many private jets and helicopters were used to transport all these world leaders to Glasgow, technology is a wonderful thing this day and age, try using it!! pic.twitter.com/plut8glvaY

The spreader event where the celebrities arrive by private jets to talk to us about climate change. #COP26 pic.twitter.com/QGyhz0kEYa

Why is it always WE, when the one saying it doesnt believe things should apply to them?

Flown the past few days to Italy, then Italy to Scotland by private jet for cop26.

Needs to change the way WE do things? 🤔 pic.twitter.com/c8g6qVxqM4

They are laughing at you. The 400 private jets used by world ‘leaders’ to get to #COP26 pumped out 13,000 tonnes of CO2 into the atmosphere, yet they want you to stop eating meat, to stop going on holiday, to buy a new electric car, & to spend thousands of pounds on new boilers. pic.twitter.com/Phj1wpQvKJ

Zero carbon?
The travel arrangements of world leaders and their entourage are a sick joke.

No covid jabs? No problem.
Worldwide pandemic? Don't be silly.

According to the non-profit group Finch's Transport and Environment, air emissions from private planes are soaring, contributing to the fact that around half of global aviation emissions come from 1 per cent of the world's population.

Watch | COP26 Summit in Glasglow: Will the world succeed in averting climate disaster?