Chinese vignettes | As COVID-19 reaches the capital, China is focused on reviving its economy 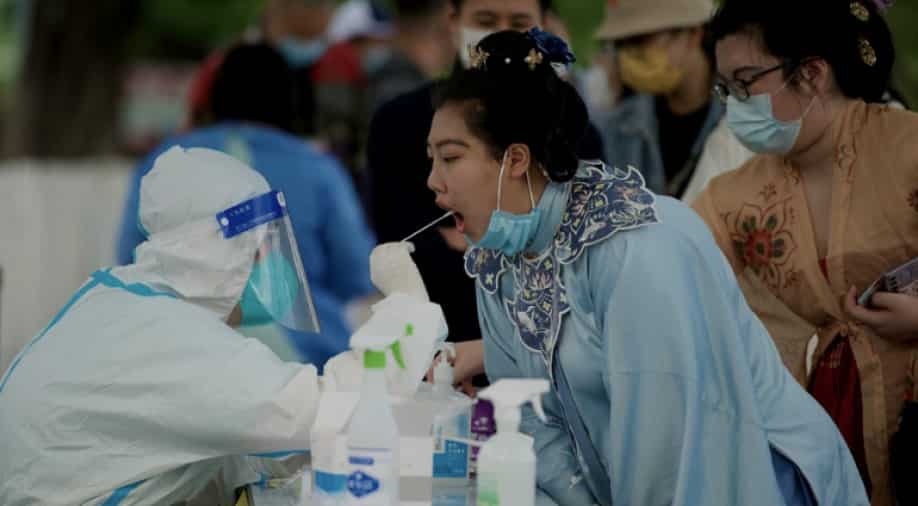 A health worker takes a swab sample at a woman to be tested for the Covid-19 coronavirus at a swab collection site in Beijing Photograph:( AFP )

After Shanghai, Beijing is now doubling down on mass testing while the Xi Jinping government is rolling out packages to revive China’s economy slowed down by Covid-induced lockdown.

After China’s financial hub Shanghai, its capital Beijing is staring at a harsh lockdown, and frustration and anger from its citizens in tow. Currently, at least 27 cities with more than 179 million people are under full or partial lockdown.

While China is showing few signs of loosening its stringent zero-Covid policies, its capital Beijing is beginning to shut down. And veteran Hong Kong actor Kenneth Tsang passed away in a Covid-19 quarantine hotel in the city.

Meanwhile, in the international arena, Serbia is showing off new Chinese missiles, and the Australian Prime Minister has accused China of interference in foreign politics. Star Skier Eileen Gu’s retirement message gains a mixed response from Chinese netizens, some warm and some not too much. This week in Chinese Vignettes, we’ll cover all the top stories making news in China.

China over the week

China’s financial capital Shanghai and national capital Beijing power much of the country’s economy. But both are under lockdown. And these strict curbs along with the ongoing Ukraine crisis are taking a significant toll on the economy.

“The COVID-19 and Ukraine crisis have led to increased risks and challenges. The complexity, severity, and uncertainty of China’s economic development environment have increased,” Politburo was quoted as saying.

In April, the damage from shutdowns in Shanghai and elsewhere was apparent in the first official data released over the weekend. ‘Both manufacturing and services activity plunged to their worst levels since February 2020’ imposed during the Wuhan lockdown last year, reported Bloomberg. The offshore yuan, too, weekend.  The Bloomberg report added that the signs of strain on global supply chains showed ‘suppliers facing the longest delays in more than two years in delivering raw material to their manufacturing customers.’ The GDP in Covid locked-down Jilin dropped 7.9 per cent in the three-month period of January-to-March from a year ago.

The data came a day after President Xi promised to meet China’s economic targets while sticking to the zero-Covid policy.

“Stabilising growth, employment and prices are facing new challenges. It is very important to do a good job in economic work and effectively protect and improve people’s livelihood,” the Politburo was quoted as saying.

"We will strengthen macroeconomic policy adjustments to stabilize the economy, and strive to achieve the expected economic and social development goals for the full year," the statement added.

President Xi also signaled an easing of its crackdown on the tech sector as a part of the economic relief package. On Tuesday, he chaired a meeting that announced a push to boost demand, ‘reinforcing Beijing's reliance on big-ticket projects to spur growth,’ said VOA News.

Forced quarantining in China as a part of the zero-Covid policy is taking a massive toll on people. The Covid rules in China demand that anyone who either infected or a close contact of someone who is must be sent to state-run quarantining facilities.

Many videos, pictures and reports have gone viral of the showing the unsanitary conditions, with clogged up toilets and overflowing dustbins.  The elderly especially those suffering from underlying medical conditions are suffering the most.

A Shanghai resident told the BBC that her grandfather who suffers from diabetes and hypertension is bedridden and he heavily relies on caretakers.

"He just can't go to quarantine centers or hotels. The hygiene situation there is worrying. Old people can't adapt to such environments. How can he live there? …. It's just terrifying. The government has to give us a solution. [At the moment] they're just using old people's lives to achieve this goal of 'zero Covid'." BBC quoted the resident as saying.

This week, veteran actor Kenneth Tsang was found collapsed in his hotel room in Hong Kong where he had been undergoing quarantine after returning from Singapore. Tsang was 87, and had more than 230 acting credits including James Bond film Die Another Day.

‘He had tested negative for Covid-19, had been vaccinated with three doses, and had no chronic illness,’ said the South China Morning Post.

According to a Daily Mail report, a Chinese man sealed himself inside his car to quarantine because he thought that he had Covid.

Meanwhile, after Shenzhen, Guangzhou has become the second city to open a pet quarantine centre.

This week, Chinese Winter Olympics superstar Eileen Gu announced her retirement over social media. "Thank you China for the unforgettable few months & for the endless love, 🖤" she said.

While she was showered with love, her farewell post on Weibo caused a stir. On one hand, many thanked her back, others accused her of ‘acting like a foreigner.’ Many questioned why she didn’t say “thank you motherland” or “thank you (my) country” like other Chinese athletes, reported CNN.

While one trending comment said," "You're most welcome because you're one of us," another said, ” Ultimately, she thinks of herself as an American. She only joined China temporarily."

Over the weekend, Serbia showed off its new Chinese-made surface-to-air missiles and other military hardware. Earlier this month, China delivered its FK-3 surface-to-air defense system, purchased by Belgrade in 2019.

Serbia is the only European country to operate the Chinese missile system and CH-92A drones.

"We're going to significantly strengthen our fighter air force ... Serbia is a neutral country and Serbia must find solutions enabling it to preserve its sky and its state," said President Aleksandar Vucic on Saturday.

Australian PM Scott Morrison accused China of "form", or a record, on interference in foreign politics. The statement came after Home Minister Karen Andrews said ‘Beijing’s unveiling of a security deal with the nearby Solomon Islands was timed to influence an election,’ reported Reuters.

"We are very aware of the influence the Chinese government seeks to have in this country… There is form on foreign interference in Australia." said Morrison in his reply to a query about the statement by the Home Minister.

Earlier, Morrison also said that Australia is worried that Beijing will increase its military presence on the pacific nation of Solomon Islands, which is less than 2,000 km from Australian capital Canberra. He further added that "Any suggestion that the Chinese government doesn't seek to interfere in Australia, well, we didn't put that legislation in for no reason.”

Australia is set to vote on May 21.