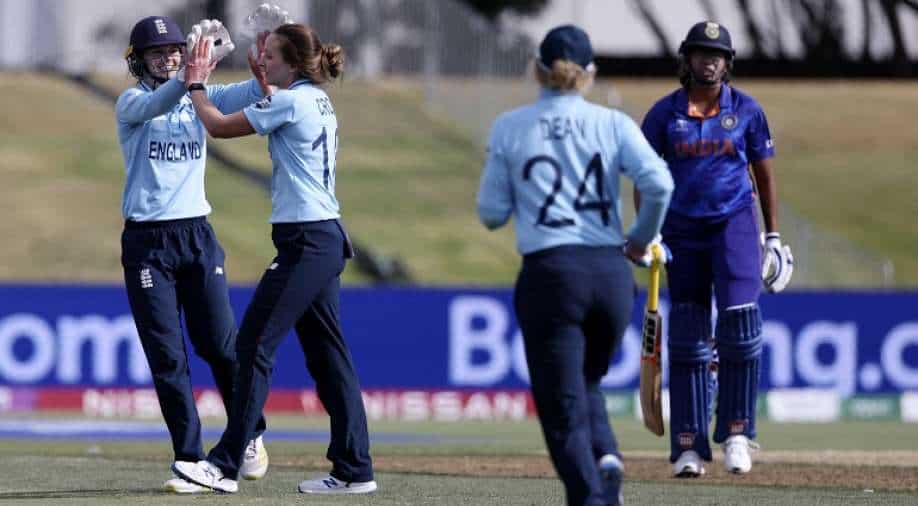 Dean (4/23) was the pick of the bowlers for England while Shrubsole (2/20) also chipped in with two wickets. Photograph:( AFP )

An inconsistent India paid the price for a shoddy batting effort but England infused a new life into their title defence with a four-wicket win in a league-stage game of the ICC Women World Cup, here on Wednesday.

Inconsistency returned to haunt Indian batters as they were bundled out for a meagre 134 by England, who chased down the target in 31.2 overs to record their first win in the tournament after a hat-trick of defeats.

India got some runs on the board, thanks to previous game's centurion Smriti Mandhana, who top-scored for the side with a 35-run knock while wicketkeeper batter Richa Ghosh made 33.

With wickets falling intermittently, England bowled out India in 36.2 overs.
England also made a stuttering start to their chase as they lost both their openers -- Danni Wyatt (1) and Tammy Beaumont (1) -- cheaply with the scoreboard reading four for two in the third over.

Wyatt was first to depart in the second over, courtesy a sensational diving catch by Sneh Rana off medium-pacer Meghna Singh (3/26).

Veteran Jhulan Goswami, the highest wicket-taker in the history of the tournament, then trapped Beaumont in the second over after India went for the review. It was 250th wicket for the pacer in ODIs.

England skipper Heather Knight (53 not out) and Nat Sciver (45 off 46) then steadied England innings, playing cautiously to reach 34 for 2 in 10 overs.

While Knight played a captain's knock by anchoring the chase, Sciver took the attack to the Indian bowlers, hitting as many as eight boundaries during her entertaining knock, in which she pulled off some pull shots.

With just 135 required for a win, what England needed was a decent partnership after the early blows and Knight and Sciver provided that by sharing 65 runs for the third wicket.

Sciver's innings was cut short by Pooja Vastrakar. It was a soft dismissal and against the run of play as Sciver spooned a length ball to Goswami while looking to work the ball on the on-side.

Amy Jones (10) then stitched a 33-run stand for the next wicket with Knight before the former fell to a stunning backward running catch by India vice-captain Harmanpreet Kaur at mid-on off Rajeshwari Gayakwad's bowling.

By then it was all over for India by then as England needed just 32 more runs.

The Indians picked up two more wickets in the 30th over before England completed the formality.

Meghna dismissed Sophia Dunkley (17) and Katherine Brunt (0) within a span of three balls in identical fashion -- caught behind by wicketkeeper Richa Ghosh.

Earlier, in sharp contrast to India's performance against the West Indies in their last match when they rode on centuries from Mandhana and Harmanpreet Kaur to post 317 for 8, their highest total in the history of the showpiece event.

Charlie Dean (4/23) was the pick of the bowlers for England while Anya Shrubsole also chipped in with two wickets as the Indians failed to build a decent partnership.

Having suffered three defeats from as many matches so far, it is a must-win match for title holders and four-time champions England.

The defeat failed to dislodge India from the top four as the Mithali Raj-led side is occupying the third spot in the eight-team standings with four points from two wins and as many losses.

England, on the other hand, opened their tally and are placed seventh with two points from four matches.