Want to focus on setting targets and defending them, says Rohit Sharma 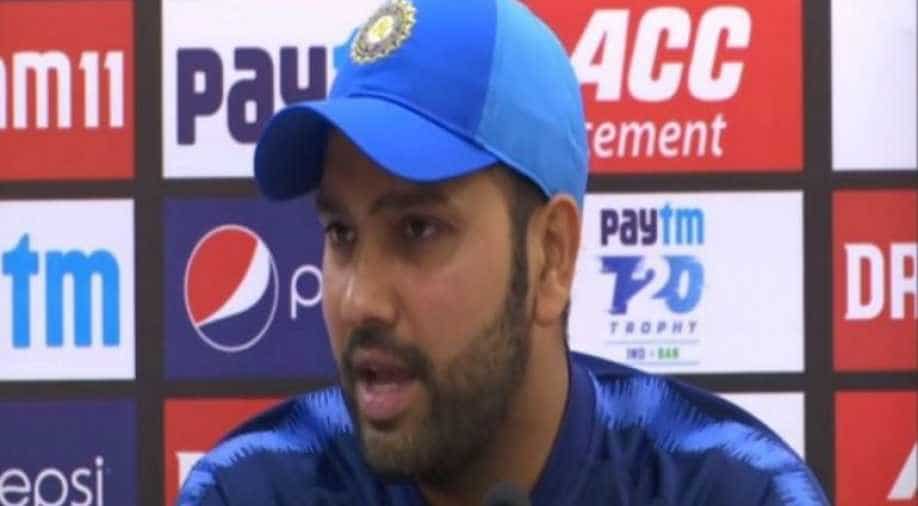 India will take on Bangladesh in the first T20I of the three-match series tomorrow at the Arun Jaitley Stadium.

As India and Bangladesh get ready to lock horns in the first T20I of the three-match series, skipper Rohit Sharma on Saturday said that the side wants to focus on setting targets and defending them ahead of the T20 World Cup in 2020.

"We have looked at certain number of stats on how we chase and set target. Our numbers are great when we chase down the total. We want to focus on setting targets and defending them. The last T20I we played at Bengaluru against South Africa, we batted first on a sticky wicket as we wanted to challenge ourselves before T20 World Cup next year," Sharma told reporters.

"At the same time, we want to win games as well. We have not done well in the T20 format recently, probably we are ranked at number five in the ICC T20I rankings. We want to be at the top in all three formats of the game," he added.

Sharma also said that Rishabh Pant is a match-winner in the T20I format and needs to be given a consistent run as he can take the game forward on his day.

Both wicket-keepers (Rishabh Pant and Sanju Samson) that we have in our squad are pretty talented. We have stuck with Pant, this is the format that gave him recognition. We have to stick with him for a while, we know how well he can take the game forward if he has his day," Sharma said.

The 32-year-old also said that the side has a lot of options and they need to be a given a number of games to get the best out of them. He also opined that both the Indian Premier League (IPL) and international cricket are different and have different challenges.

''We have a lot of options. They just need to have a number of games behind them. This is the best time for us to try all the guys that are in the squad. When they play in the IPL, that is a different ball game, when you play international cricket, it is a different situation. In international cricket, there are limited opportunities and you have to make the most of it," Sharma said.

India will take on Bangladesh in the first T20I of the three-match series tomorrow at the Arun Jaitley Stadium.