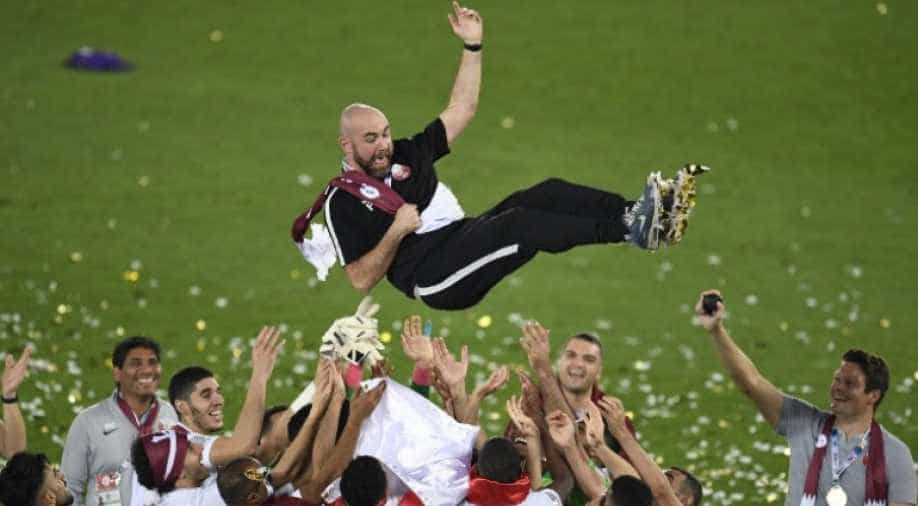 Qatar's coach Felix Sanchez is thrown in the air as his team celebrates their win in the 2019 AFC Asian Cup. Photograph:( AFP )

Almoez Ali said he saw shades of Manchester City's Guardiola in Sanchez, who coached Barcelona's youth players before joining Qatar's national academy in 2006 and working his way through the ranks.

Almoez Ali scored a tournament-record nine goals and the Maroons conceded only once as they swept to the first continental title in their history, beating Japan 3-1 in the final.

Ali said he saw shades of Manchester City's Guardiola in Sanchez, who coached Barcelona's youth players before joining Qatar's national academy in 2006 and working his way through the ranks.

"I've been working with him for nine years, he's highly intelligent," said the 21-year-old striker. "I compare him to Guardiola because he has the same ideas."

But Sanchez told AFP that Ali only made the comment "because I'm there (listening) and he wants to keep playing".

"I've worked with Almoez for a very long time and we have good relationship," the Spaniard said.

"He's very easy to coach because he's a hard worker and he deserves everything that has happened to him in this tournament."

Qatar upset former champions Saudi Arabia, Iraq and South Korea on their march to the final, but those weren't the only challenges they faced.

The Qataris were pelted with shoes and plastic bottles by a hostile home crowd as they beat the United Arab Emirates 4-0 in the semi-finals.

The UAE then lodged a protest over the eligibility of Ali and defender Bassam Al-Rawi which was dismissed just hours before the final.

Sanchez insisted he had "no concerns" about the eligibility row and also dismissed speculation that notoriously trigger-happy Qatar might replace him with a big-name coach before the World Cup.

"I'm very proud to be the Qatar national team coach. Today we made history. I'm only thinking about today. It's a great day for me and the players and the country," Sanchez said.

"There's always news about this person and that person but we're focused on our work and we have the full support of the QFA.

"So no concerns about the World Cup, it's in 2022 and you don't even know what's going to happen in two weeks."