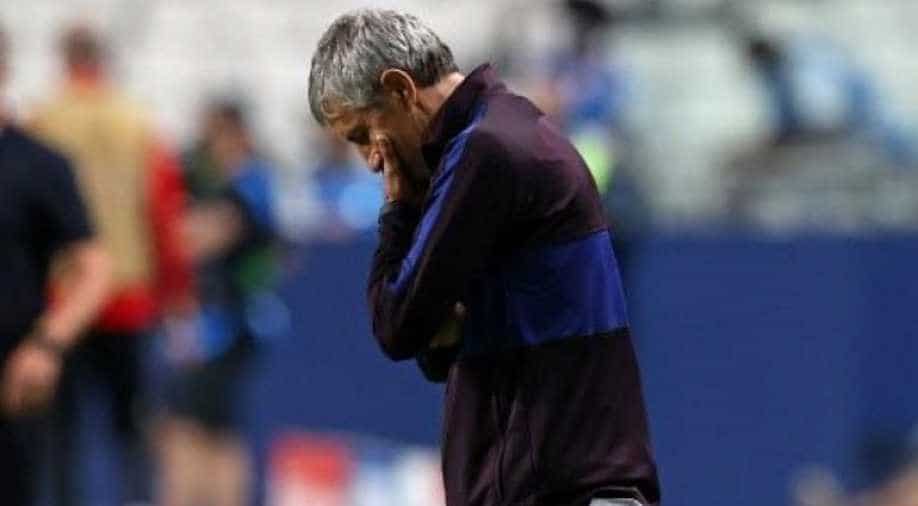 End of an era as Barca humiliation makes revolution the only option Photograph:( AFP )

'It's too soon to say if I will continue or not and it doesn't depend on me,' said Quique Setien

Barcelona's worst ever defeat in Europe, an 8-2 mauling at the hands of Bayern Munich, will signal the end of Quique Setien as coach but it feels like the end of more than that.

Setien may not even survive the weekend but the fact a second sacking in eight months would be the least of Barca's worries says it all.

"It's too soon to say if I will continue or not and it doesn't depend on me," said Setien.

"The club needs changes," said Gerard Pique. "Nobody is untouchable, least of all me. Fresh blood is needed to change this. We've hit rock bottom."

Lionel Messi was supposed to win it alone, the Argentinian charged with somehow masking the failings of an entire club against the most formidable team in Europe.

It was a desperate hope, swiftly dashed by a ruthless Bayern side, whose demolition exposed Barcelona's ageing team for what Messi has been saying all along: they are simply not good enough.

He said it in February and again in July, when a rant in the aftermath of handing Real Madrid the title turned into a brutal, but honest, assessment of their season.

Messi saw the fall coming but it was too late to do anything about it and the question now is whether he wants to be part of the process of recovery and renewal.

Most have assumed it would take something cataclysmic for Messi to leave but at an elite football club, what could be worse than this?

This was more painful than the capitulations against Roma and Liverpool, when carelessness and fragility deprived Barcelona of a genuine chance to lift the Champions League trophy.

But they were shocks because Barca were contenders. This time, nobody expected them to beat Bayern. Many expected a thrashing but few could have predicted the severity of it.

The humiliations started in the fourth minute and kept coming until the 89th.

They began even before kick-off when the starting line-ups were announced, with three Barca signings bought for more than 100 million euros each all sitting on the bench.

One of them, Philippe Coutinho, was on Bayern's bench and he came on to score twice against his parent club, the first even seemingly with reluctance.

Brave decisions await
Messi, at 33, knows his end is near but he will choose when it comes. Others may not be so lucky, with Pique and Luis Suarez also 33 and Sergio Busquets and Jordi Alba 31.

All of them have played a part in Barca's golden era but that era feels a long time ago now and if this team is to regenerate, brave decisions will have to be made.

Frenkie de Jong, Ansu Fati and Riqui Puig are the future, smothered this season by the failures of those ahead of them and perhaps ready to be trusted to lead.

If it's the end of an era for Barcelona, it is for Spain too. The national team may have long been overtaken but Messi kept Barca challenging while the Champions League became the kingdom of Real Madrid.

Not anymore, this the first year since 2007 that the semi-finals will be without a Spanish club, and the first since 2005 without either Messi or Cristiano Ronaldo.

Who will lead the Barca revolution remains to be seen, with Xavi Hernandez, Mauricio Pochettino and Ronald Koeman all sufficiently put off that they rejected the chance in January. Will they be any keener now?

Barcelona will not have the money to make big additions, meaning they may have to look within.

But that would be a long-term project, which the club cannot guarantee either given their presidential elections are due in 2021. A new regime could well bring a new coach too.

A year might even feel like a long time for the current president Josep Maria Bartomeu, who would not rule out the elections being brought forward on Friday.

"Today was a disaster," he said. "Some decisions we had already thought to take and others we will think about in the next few days."

Since 2014, his board have stumbled from blunder to blunder, all the while alienating the dressing room and driving this period of chaos and decline.

It began with Neymar leaving and never being replaced, the frantic attempts to bring him back then failing because the funds had been squandered elsewhere.

And it ended with a public humiliation that Messi saw coming. It had been coming for a long time.