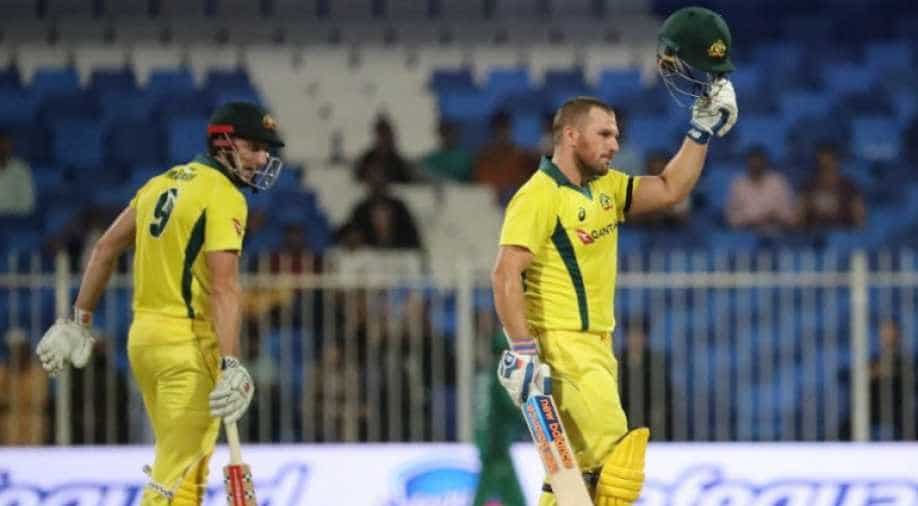 Chasing 281 to win, the tourists reached their target with an over to spare and took a 1-0 lead in the five-match series with Finch making 116 and Shaun Marsh unbeaten on 91.

Australia captain Aaron Finch scored a century as they beat Pakistan by eight wickets in the opening one-day international at the Sharjah Cricket Stadium on Friday.

Chasing 281 to win, the tourists reached their target with an over to spare and took a 1-0 lead in the five-match series with Finch making 116 and Shaun Marsh unbeaten on 91.

Unbeaten Haris Sohail's maiden ODI ton had helped Pakistan reach 280 for five in 50 overs after skipper Shoaib Malik, standing in for the rested Sarfraz Ahmed, won the toss and elected to bat.

Sohail, who scored his first test century against Australia in October, anchored the innings with an unbeaten 101 off 115 balls including six fours and a six before late fireworks by Imad Wasim ensured they would defend a challenging total.

The victory was Australia's fourth in a row in the format and follows their 3-2 series triumph in India.

Finch and Marsh put on a 172-run stand after Usman Khawaja was dismissed for 24. The pair paced their innings perfectly on a wicket that improved under lights before Finch was dismissed by debutant pace bowler Mohammad Abbas in the 43rd over.

Earlier, Pakistan's openers started sluggishly, with Imam-ul-Haq scoring 17 before being dismissed by spinner Nathan Lyon while debutant Shan Masood was castled by paceman Nathan Coulter-Nile for a 62-ball 40.

Sohail and Umar Akmal combined for a 98-run partnership before the latter, dropped by Peter Handscomb in the 27th over, was caught at mid-off just short of his half-century as he looked to increase the scoring rate.

Malik was bowled by Glenn Maxwell for 11 shortly afterwards and was replaced in the middle by Faheem Ashraf, who helped steady the innings with a handy 28.

Sohail, playing in his first ODI in over four months, edged closer to his century before completing it with a single off Coulter-Nile in the final over of the innings.

Pakistan scored 55 runs in the last five overs thanks to all-rounder Wasim, who made an unbeaten 28 from 13 balls to boost the total.

The second game takes place at the same venue on Sunday.