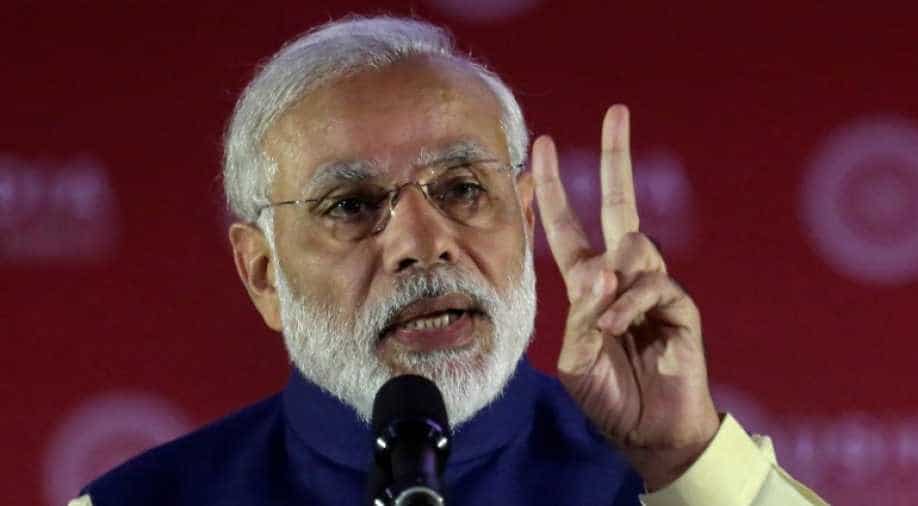 'I thank people for the historic participation in the survey. It's satisfying to read the insightful views & comments,' the Prime Minister tweeted along with the results of the survey conducted on the Narendra Modi App. Photograph:( Reuters )

More than 93 per cent of the five lakh people who participated in a survey on the Narendra Modi App have supported demonetisation, the Prime Minister's office said Wednesday, a day after Indian Prime Minister Narendra Modi sought the public's feedback on the issue.

"I thank people for the historic participation in the survey. It's satisfying to read the insightful views & comments," the Prime Minister tweeted along with the results of the survey conducted on the Narendra Modi App.

"Unprecedented response to App Survey, record number of citizens share their view," said the title of a write-up on narendramodi.in; the link to which was shared by Modi on his Twitter account.

I thank people for the historic participation in the survey. Its satisfying to read the insightful views & comments. https://t.co/xf14LEiQHT pic.twitter.com/cGSBPlCnE5

The survey result was read out by IT and Telecom minister Ravi Shankar Prasad at Cabinet meeting this evening, prompting Modi to say that it "reflects the mood" of the people.

In just over 24 hours of the survey, more than 5 lakh people have participated and expressed their opinion, it said, adding "This is a staggering number by any stretch. No opinion survey conducted in India, on such policy or political issues, even comes close to sampling so many responses."

More than 93 per cent people support the move to demonetise the old 500 and 1000 Rupee notes, it said. Of the over 5 lakh responses so far, only 2 per cent have rated the move as 'very poor' or 'one star', the survey result said.

"As high as 86 per cent people believe that some so- called anti-corruption activists are now actually batting in support of black money, corruption and even terrorist financing!", the write-up said.

The write-up said the demonetisation survey was launched on the NM App yesterday at 10 am and "the response has been phenomenal."

Modi's move to gauge the views of the people directly came at a time when the opposition has escalated its attack on the issue of demonetisation.

Explaining the reason behind the Prime Minister's move on survey, the write-up said Modi's "belief in participative governance and direct engagement with people is unwavering" and "time and again, he has directly engaged with the people and sought their views on a wide range of issues.

"...It was then decided to speak directly to the people and take their views in an open, free, fair, and equitable poll.

"Instead of intermediaries speaking on behalf of people, let the people speak for themselves. Let them say whether they support or oppose the demonetisation move.

"Let them offer suggestions to alleviate the genuine inconveniences that some people may be facing. If someone has a well-argued case of opposing the move, let them say that too. Overall, instead of just opinion, let data speak for the support for the move."

Contending that the questions to which the Prime Minister had sought answers were "comprehensive and direct", the write-up said the queries also included opportunity to give feedback.

"The overall aim included means to make the implementation stronger and more effective," it said.

The questions included "Do you have any suggestions/ideas or insights you would like to share with PM Narendra Modi.