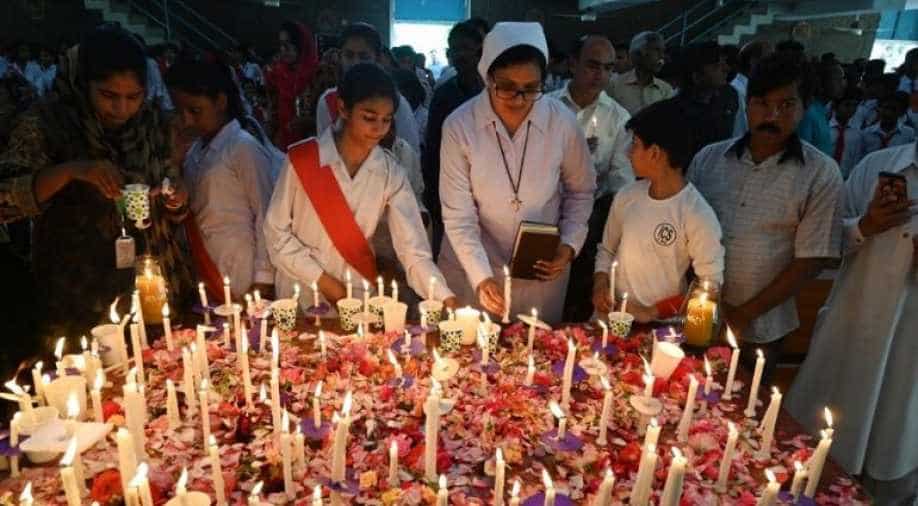 A Pakistani Christian nun and others place candles during a memorial service for those who were killed in the Easter Sunday suicide bomb attacks in Sri Lanka, at Fatima Church in Islamabad, on April 25, 2019 Photograph:( AFP )

Days after the coronavirus crisis took hold in Pakistan, Aamir Gill, a cleaner and member of the country's Christian underclass, was fired with no warning or severance by the wealthy family he had helped look after.

Many other Christians -- who live a hand-to-mouth existence in the Islamic country -- have also been laid off and, with little access to government help, are wondering how they will survive.

"We were already untouchables and now due to corona, rich people think the poor might bring it into their homes," Gill told AFP ahead of an uncertain Easter.

Along with two other servants, he worked at a large house in the capital -- mostly to clean up after parties.

"I have no idea how many bedrooms it had but it was big," explained Gill, who lives in Islamabad's Christian slums in a cramped one-room home with his family of four.

"My kids asked me for new Easter dresses and shoes but I have told them we are not going to have Easter this year."

Christians -- who comprise roughly two percent of the population -- occupy one of the lowest rungs in class-obsessed Pakistan.

Most work menial jobs without contracts as street sweepers, cleaners and cooks and live in crowded, multi-generational households where social distancing is all but impossible.

Also read: Pakistan: One woman, 20 others injured in stampede at coronavirus aid program

Their worsening plight means the Easter -- which normally marks rebirth, springtime and abundance -- will be filled with "depression and despair", said Haroon Ashraf.

"The coronavirus has snatched away the bit of bread we had," said the 25-year-old, who lost his restaurant job when the virus hit.

Along with his brother, who is also now jobless, he is supporting a family of seven that is squeezed into a two-room flat.

He was hoping to apply for financial relief from the state, but was hindered by being unable to read.

For decades, they have been subjected to violent attacks by Islamists, and tarred with blasphemy allegations that they are mostly helpless to deflect and often result in lynchings.

They often live in impoverished "colonies" in urban centres, including in the capital Islamabad where the slums are sandwiched between the wealthiest neighbourhoods.

The loss of a job or an unexpected medical bill frequently sends families into spiralling debt in the absence of strong safety nets in the deeply impoverished country of 215 million.

Also read: Why has Pakistan recorded a surge in COVID-19 cases?

"In this crisis, where they are confined to crowded spaces with few resources, they cannot be left to face a cruel choice between starvation and infection," said Omar Waraich, deputy regional director for South Asia at Amnesty International.

The pandemic and ensuing lockdown means lively Easter Sunday services and celebrations usually spent in churches inside the maze-like slums will be abandoned.

Christians in Pakistan with smartphones have tuned into online services while others have joined neighbours on their rooftops, where sermons are yelled and hymns are sung in unison.

For Sharoon Shakeel, this Easter season has been ladened with misery after the recent death of his father, followed by losing his job.

"We are running out of food," said Shakeel, who was already in debt from the funeral costs. "How can we celebrate Easter?"