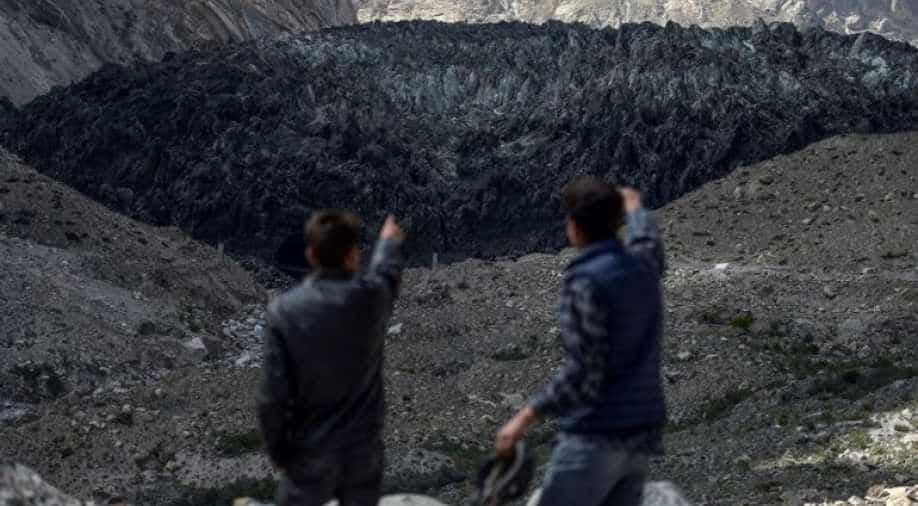 Climate change is causing most glaciers worldwide to shrink, but due to a meteorological anomaly, this is one of a few in the Karakoram mountain range in northern Pakistan that is surging.

The villagers of Hassanabad live in constant fear.

Above them, the vast Shisper glacier dominates the landscape, a river of jagged black ice moving towards them at as much as four meters per day.

Climate change is causing most glaciers worldwide to shrink, but due to a meteorological anomaly, this is one of a few in the Karakoram mountain range in northern Pakistan that is surging.

This means hundreds of tonnes of ice and debris are pushing down the valley at ten times the normal rate or more, threatening the safety of the people and homes below.

Flash floods caused by glacial lakes, ice, and rockfall and a lack of clean and accessible water are all serious risks for those close to its path.

"When a glacial lake bursts there is an enormous amount of not only ice, water and debris that falls through, but also mud and this has devastating effects, it basically destroys everything that comes in its way," said Ignacio Artaza of UNDP Pakistan.

But repercussions of the Shisper glacier surge extend far beyond its path: The mighty Indus River is reliant on seasonal melt for more than half of its flow and changes in Pakistan's ice fields affect this.

That has implications not just for those living in its basin, but for the whole nation, which relies on it for much of its food.

Shifting water levels also have implications for the fragile relationship between nuclear-armed neighbors Pakistan and India.

Already ranked among the planet's most water-stressed nations according to the World Resources Institute, both need the Indus and its tributaries.

Their access to the water is governed by the 1960 Indus Water Treaty, which aims for fair usage.

But there have long been fearing India, which sits upstream, could weaponize the resource, it has threatened more than once to restrict Pakistan's access including just last year.

The Karakoram, which contains some of the world's tallest mountains including K2, is just one of the mountain ranges that criss-cross the Hindu Kush-Himalayan region.

Sometimes called The Third Pole, the region holds more ice than anywhere other than the Arctic or Antarctica.

But a third of the glaciers here are expected to melt by 2100, endangering the lives of hundreds of millions, according to this year's Hindu Kush-Himalaya Assessment Report.

Rising in Tibet, the Indus crosses through India and Pakistan fed by a multitude of tributaries before it reaches the Arabian Sea.

The waterway's basin produces 90 percent of Pakistan's food, according to the UN, and agriculture is dependent on irrigation from the river, which heavily relies on meltwater from the ice sheets.

With its surging population experts warn the nation faces "absolute water scarcity" by 2025, with the loss of the Himalayan glaciers a key threat.

While scientists cite climate change and topography, it's not clear exactly what causes the Karakoram anomaly where glaciers are surging and in some cases growing.

But many say these changes will also impact the Indus because they alter meltwater patterns, causing flash flooding or water shortages that are difficult to predict and manage.

"The Shisper glacier is increasing its length and width, furthermore it is also moving downhill," explained Shehzad Baig of the Gilgit-Baltistan Disaster Management Authority.

He warned climate change meant there was heavier snowfall during the winters and warmer temperatures in the summers, leading to the ice mass producing more meltwater, swelling the Hunza River, a churning mountain tributary of the Indus.

"This may cause harm to the local community and deprive the people of the Indus basin blocking or disturbing drinking water and irrigation channels," Baig warned, adding that changing weather patterns were also creating more glacial lakes.

The UNDP estimates that more than 3,000 glacial lakes have been formed in the region, with 33 posing an imminent threat of 'outburst floods', known as GLOFs, that could impact as many as seven million people.

Last year the surging Shisper glacier effectively dammed a meltwater stream from a neighboring glacier creating a large lake. Authorities were forced to issue safety warnings to Hassanabad and local villages before the water was drained.

But satellite data shows the lake is already reforming, leaving residents fearing not only the progression of the crushing ice sheet but that they will be swept to their deaths in flash floods.

"This whole area will be devastated, the whole population and people's properties will go into river," cautions villager Didar Karim.

Professor Andreas Kääb from the University of Oslo says Pakistan must adapt its "monitoring and response strategies, and risk management in general" to contend with both surging and shrinking glaciers.

Authorities, working with the UN, are setting up early warning systems using sensors positioned on top of the Shisper glacier and downstream to alert communities.

But the challenge for Pakistan extends beyond crisis management to the long-term water conservation and storage, experts say.

"Pakistan has to increase its water storage capacity which is now 33 days, it should be at least 100 days to ensure sustainable development," cautions Dr. Ghulam Rasul of the International Center for Integrated Mountain Development.

He estimates that 60 percent of water is currently lost as run-off to the sea.

With few functioning resevoirs the nation is ill-equipped to harness the short-term excess water as climate change causes more glaciers to melt, or from the increasingly erratic monsoon deluges.

And by 2050, with so much of the ice sheets lost scientists say the flow of the Indus will dramatically decrease, leaving Pakistanis more vulnerable than ever.

Rasul says: "Water is the capital of agrarian economies and guarantees food and energy security. Shortage of water against increasing demand could lead to conflict."