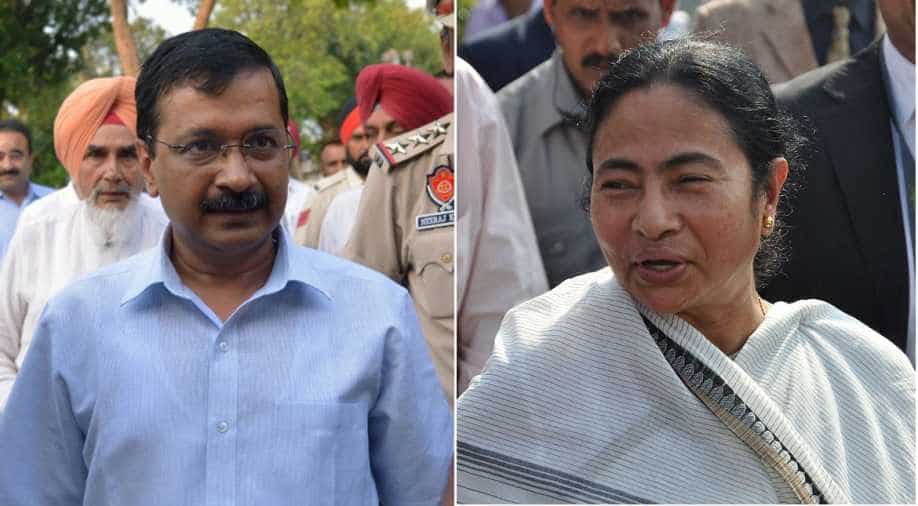 The Delhi Chief Minister alleged that demonetisation was being carried out to write-off around Rs 8 lakh crore of loan owed by Modi's "corporate friends" by collecting Rs 10 lakh crore from the people through the exercise. Photograph:( AFP )

The AAP chief asked the government to roll back demonetisation in three days while the TMC supremo said such a crisis was not seen even during Emergency.

Addressing a rally in Delhi, Kejriwal alleged that demonetisation was the "biggest scam" in independent India's history while Banerjee said Modi should not run the country through "dictatorship", calling the protest a fight to save the country.

The Delhi chief minister alleged that demonetisation was being carried out to write-off around $118 billion (Rs 8 lakh crore) of loan owed by Modi's "corporate friends" by collecting about $147 billion (Rs 10 lakh crore) from the people through the exercise.

"Black money is flooding the market again. Notes are being home delivered to some people. This is independent India's biggest scam. The government wants to amass $147 billion by forcing the people to deposit their money in banks and use that amount to write off loans of Modiji's friends.

"Modiji sent Vijay Mallya, who has huge debt, to London one night. He has also brought people to the streets (following demonetisation). People are being cheated. Why did IT not raid former BJP Minister G Janardana Reddy who spent Rs 500 crores ($5 billion) in his daughter's wedding? And they want us common people to spend Rs 2.5 lakh ($3686) in a wedding," he said.

Kejriwal also took a dig at finance minister Arun Jaitley wondering if he spent only Rs 2.5 lakh ($3686) in his daughter's wedding recently.

"Modiji, do not fool people saying standing in line is patriotism. Who is responsible for the death of 40 people standing in queues?" he said, addressing traders at Azadpur wholesale fruit and vegetable market.