Bangladesh court asks government why jailed photographer should not get bail 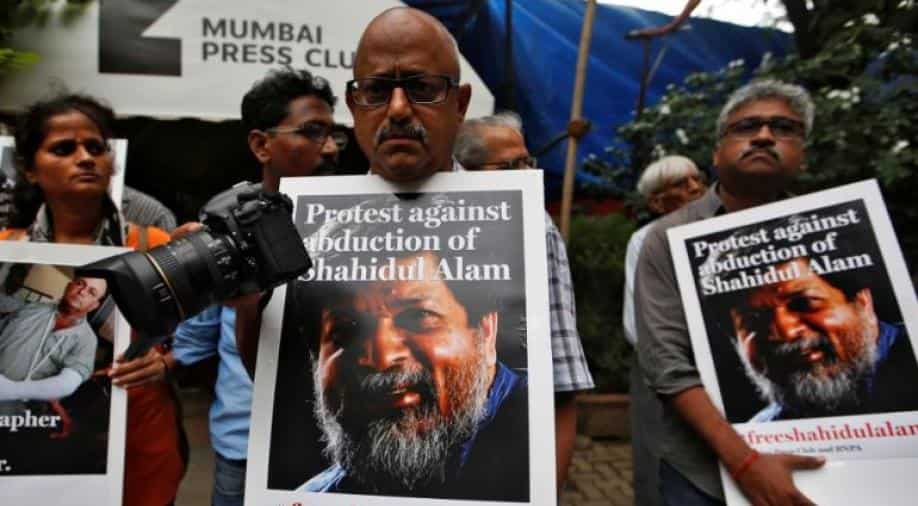 Journalists protest against the arrest of Bangladeshi photojournalist Shahidul Alam and the recent attack on Indian photojournalist Pravin Indrekar, at the Press Club in Mumbai. Photograph:( Reuters )

Shahidul Alam, an award-winning photographer, was detained in August on suspicion of spreading "propaganda and false information" during widespread student protests.

Bangladesh's High Court issued a notice to the government on Sunday asking it to justify why a prominent social activist should not be granted bail, in a case widely seen as a test for freedom of speech.

Shahidul Alam, an award-winning photographer, was detained in August on suspicion of spreading "propaganda and false information" during widespread student protests.

He was picked up from his home hours after giving an interview to Al Jazeera, in which he accused the government of extrajudicial killings and corruption - accusations the government dismissed.

The 63-year-old had also posted comments on social media saying that a student wing of Prime Minister Sheikh Hasina's ruling party was trying to attack the protesters - accusations that were also denied.

The High Court on Sunday heard Alam's appeal against the decision of a lower court to deny him bail last month. It issued the notice to the government and asked it to reply within a week, Alam's lawyer Shahdeen Malik told Reuters after the hearing.

Bangladesh's Attorney General Mahbubey Alam appeared in court on behalf of the government and said bail would hamper the on-going investigation.