Maruti rolls out all new Swift Dzire at Rs 5.45 lakh 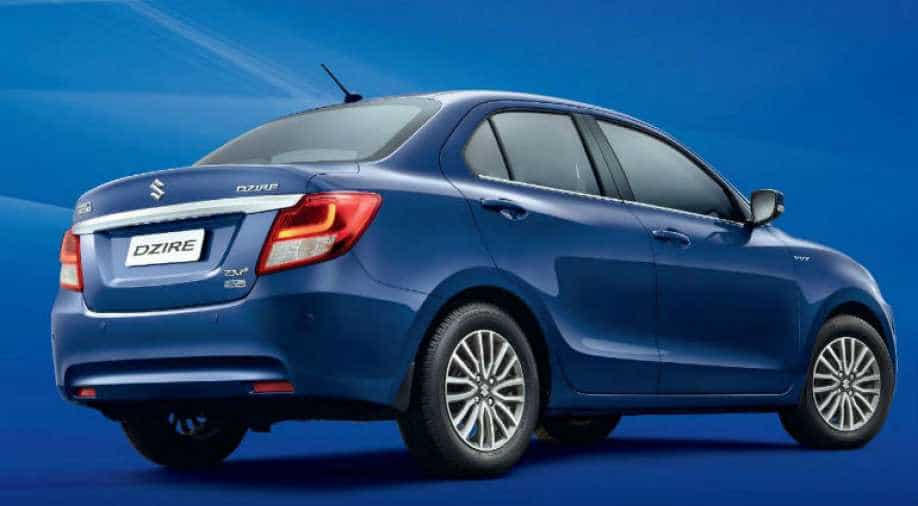 The all new Swift Dzire 2017 is shown in this picture illustration Photograph:( Others )

The new Dzire is priced between Rs 5.45 lakh and Rs 9.41 lakh (ex-showroom Delhi). ||It comes with a 1.2-litre petrol engine and a 1.3-litre diesel powertrain and delivers fuel efficiency of 28.4 kmpl for diesel version and 22 kmpl for petrol powered versions.

The petrol automatic variants are priced between Rs 6.76 lakh and Rs 8.41 lakh while the diesel trims with automatic transmission are in the range of Rs 7.76 lakh and Rs 9.41 lakh (all prices ex-showroom Delhi).

Dzire will compete with the likes of Hyundai Xcent, Honda Amaze, Ford Aspire and Volkswagen Ameo. These models are priced in the range of Rs 4.7 lakh to Rs 8.41 lakh.

The model was specially created for India and has been one of the most popular brands ever in the Indian auto market, he added.

"Now we have designed a whole new Dzire for sedan customers to fulfil the growing aspirations of a young and prosperous India," Ayukawa said.

The company has already received bookings for 33,000 units so far. MSI along with its suppliers has invested over Rs 1,000 crore for the new generation Dzire. The compact sedan comes with around 99 per cent localisation.

The new Dzire comes with a 1.2-litre petrol engine and a 1.3-litre diesel powertrain. It is wider by 40 mm than the outgoing version. It also comes with 62 litres of extra boot space and extra leg room of 55 mm compared to the previous Dzire.

The sedan would be mainly produced at the company's Manesar facility. The present generation Dzire would now be sold as Dzire Tour to fleet operators. The company has till date sold 14 lakh units of the model in India since the launch of first generation Dzire in March 2008.

Dzire has been instrumental in making the company a strong player in the entry sedan segment. The model has been contributing to around 50 per cent of vehicle sales in the compact sedan segment.