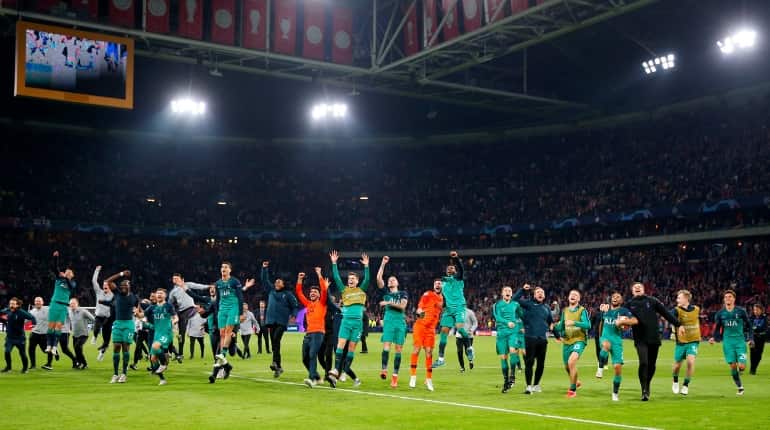 Tottenham staged an incredible fightback to reach their first Champions League final with an astonishing 3-2 win over Ajax in the semi-final second leg.

A day after Liverpool's comeback against Barcelona, Tottenham trailed 2-0 at half-time of their semi-final second leg in Amsterdam, 3-0 on aggregate.

Spurs will play against Liverpool in Madrid on June 1. 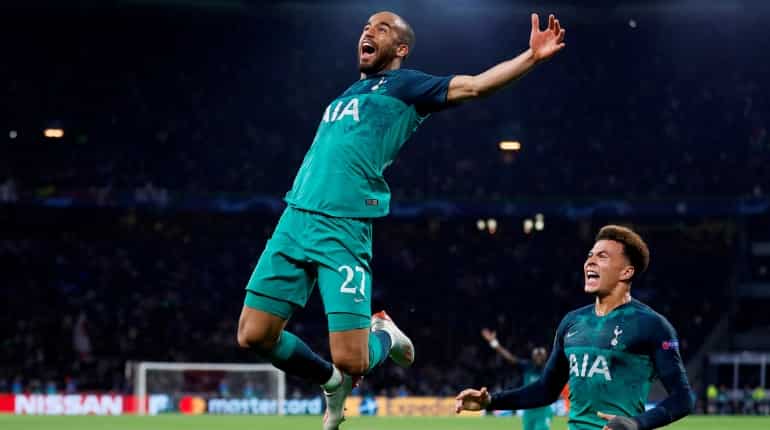 When Lucas Moura played kick-about with his one-year-old son on the pitch at the Tottenham Hotspur Stadium after his hat-trick against Huddersfield in April, it seemed the Brazilian forward's season had reached its high point.

But the 26-year-old's treble in that low-key 4-0 win was just the start of a remarkable end to the season for the unsung hero whose incredible hat-trick broke Ajax hearts.

Unwanted by Paris Saint Germain, who sold him to Tottenham in January 2018, Lucas was a bit-part player for much of his first season in north London.

In a testimony to his strength of character, he refused to be marginalised again this term and quickly proved his worth with a brace in Tottenham's win at Manchester United in August.

By the time injury sidelined Harry Kane in the Champions League quarter-finals, Lucas was primed and ready to seize his chance.

However, even Lucas would have been forgiven more pinching himself if he had learned how his trip to Amsterdam would turn out.

With Tottenham two down on the night and three goals behind on aggregate, all looked lost.

But Dele Alli's clever turn and pass into the area sent Lucas sprinting through for a cool finish past Andre Onana to give Tottenham an unexpected lifeline in the 55th minute.

Four minutes later they punished more nervous defending from Ajax to strike again as Lucas spun around to drive into the corner after Fernando Llorente's close-range effort was pushed out by Onana.

It was Lucas's fourth goal in the competition this season, his latest priceless contribution coming after he also scored the late equaliser in Barcelona that ensured their progress from the group stage.

And with just seconds left in Tottenham's semi-final escape bid, he pounced on Alli's pass to drill a fierce winner into the far corner.

Alongside Danny Blanchflower, Glenn Hoddle, Paul Gascoigne and Ricky Villa, Lucas will now forever be enshrined as a Tottenham legend. 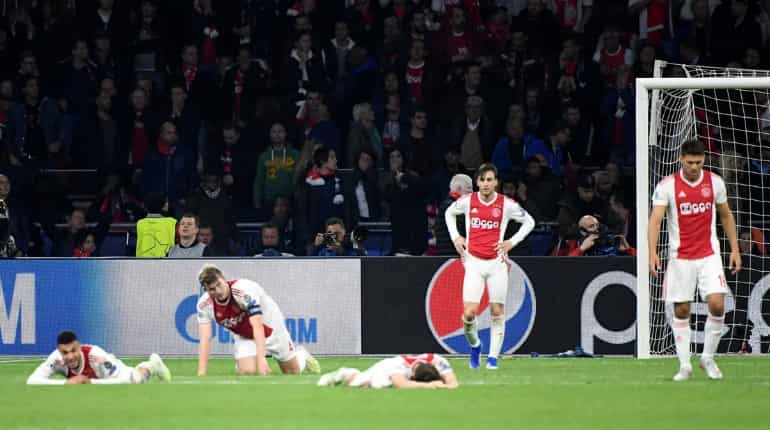 With just 45 minutes standing between Ajax and their first Champions League final since 1996, the Dutch club were engulfed by a fatal wave of arrogance.

As the half-time whistle blew, Ajax players, including Hakim Ziyech, could be seen grinning from ear to ear as they contemplated their surely inevitable progress to the Madrid showpiece.

They were leading by three goals on aggregate after scoring twice in the first half to leave Tottenham on the brink.

Such was the confidence pumping through the raucous arena that before the second half began, the entire crowd, including Ajax great Patrick Kluivert, engaged in a mass singalong to Bob Marley's 'Don't Worry About a Thing'.

The chant continued into the opening seconds of the half, but that rock-solid belief was quickly shattered as Lucas struck twice in a matter of minutes to send shock-waves through the Ajax team and their now less boisterous supporters.

The panic was palpable and Ajax couldn't recover as waves of Tottenham attacks culminated in Lucas's dramatic winner.

It was a bitter end to a breakthrough campaign for Ajax's young guns, who had beaten Real Madrid and Juventus en route to the last four. 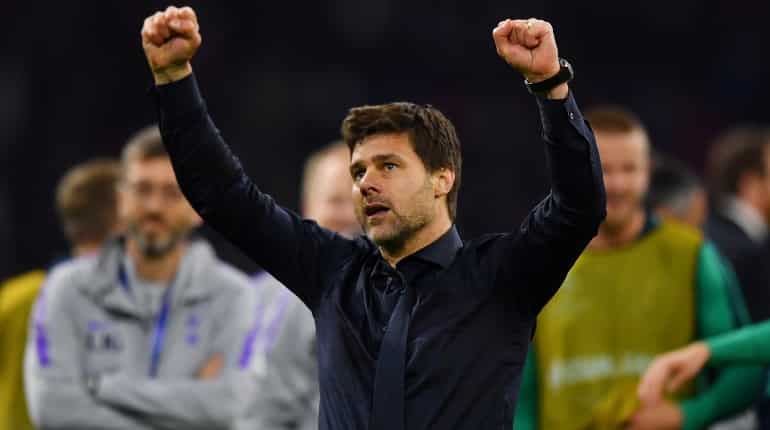 Speaking on the eve of the second leg, Mauricio Pochettino uttered a prediction that will rank among the most prescient in Tottenham's history.

Asked if his side would go for broke right from the start as they tried to overturn that one-goal deficit, the Tottenham manager replied: "We could win it in the first minute or the last minute."

Pochettino's gambit was spot on as Lucas's stoppage-time strike fired Tottenham through to an all-Premier League final against Liverpool in Madrid on June 1.

It was a tour de force for the emotional Pochettino, who turned the game in Tottenham's favour by sending on Spanish striker Fernando Llorente at half-time.

The Argentine wept uncontrollably at the final whistle as Tottenham celebrated becoming only the second team to reach the final after losing the first leg at home.

Tottenham's first European final since they won the 1984 UEFA Cup also offers Pochettino a chance to win his first trophy as a manager.

Pochettino made the staggering admission this week that he would consider quitting if Tottenham were to lift the Champions League.

Surely Tottenham chairman Daniel Levy wouldn't let him get anywhere near the exit door after this miraculous triumph. 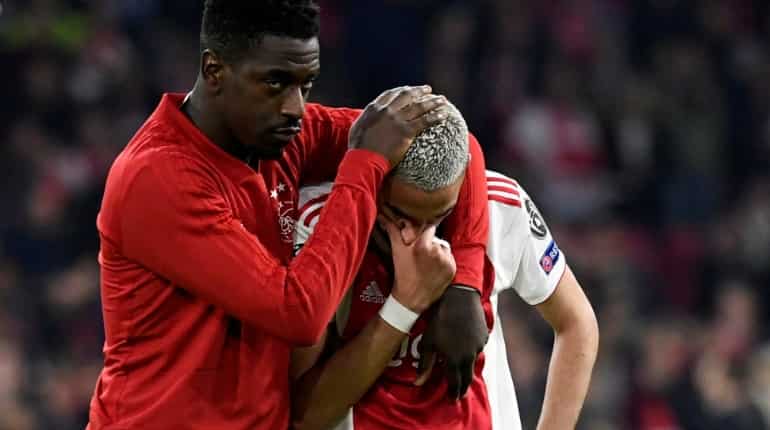 "I'm very proud of this team and that they made it this far. We have had a great run," Ten Hag said after the Dutch club were beaten on away goals on a dramatic night at the Johan Cruyff Arena.

"We tried to shut the game down and we didn't manage," admitted Ten Hag, with Ziyech also hitting the post late on for the home side.

"I told the players it is very hard to find the right words in a moment like this and that football is cruel.

"We have to endure the cruel side tonight but we have to go on.

"The Champions League final is so unique and the players all realise that very well so you need time to get over it, but we have to get back on track on Sunday."

Ajax have already won the Dutch Cup this season and can still complete a domestic double before their talented squad is inevitably broken up at the end of the campaign. 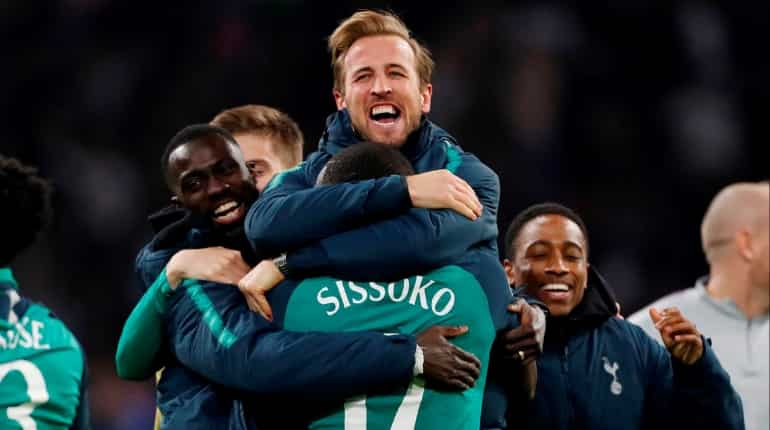 Defender Kieran Trippier said Kane had not minced his words at halftime with Spurs trailing to an inspired Dutch side and heading for a fourth successive defeat in all competitions.

Whatever Kane said, it clearly worked a treat.

"It was a disappointing first half and we let them play. I went into the dressing room at half time and we knew it wasn't good enough," Kane, who damaged his ankle in last month's quarter-final first leg against Manchester City, said.

"We said we had 45 minutes to give everything. I'm a fan first and foremost and I know how much it means to the club.

"The lads dug deep and showed passion and that is all you can ask for. We had to wait to get the third in the last minute and we found a way. I'm just speechless. I'm a fan, I want to win and I know how much it means to everyone at the club.

"I'm looking at the game and thinking about what I'd be doing out there. You can't switch out of that mode but the lads showed passion, spirit and heart."

England skipper Kane says he would take nothing for granted, however, even if he was fit. 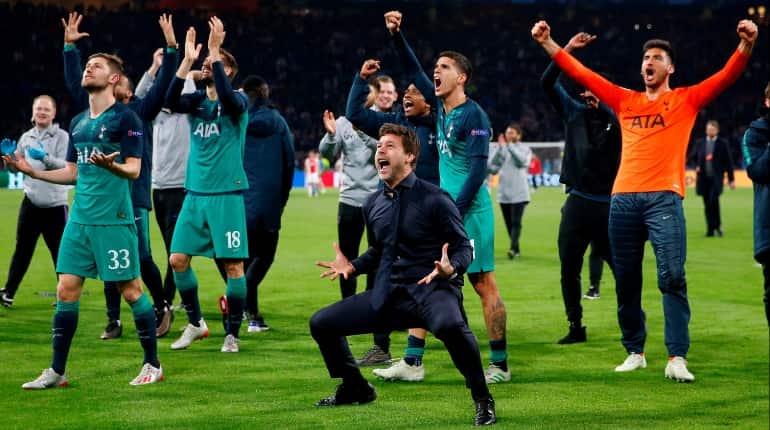 The Spurs manager was reduced to tears after the game after performing what he called "close to a miracle" and they will now meet Jurgen Klopp's side in Madrid on 1st June.

An emotional Pochettino described the dramatic events in Amsterdam as 'one of the most important nights in my life.'