Celebrating Urdu, the language of love and poetry: In conversation with Sanjiv Saraf 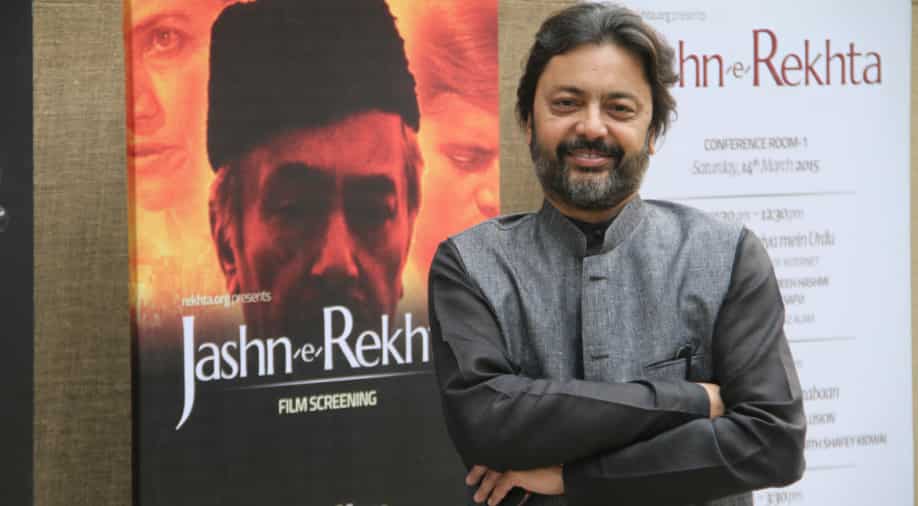 The question of when Urdu originated, is a topic much debated by scholars but traces back to the introduction of Muslim interaction in South Asia. As they brought with them Persian, Arabic and Turkish expressions into the local Indian languages, a confluence of Sanskrit and Persian led to the growth of both Hindi and Urdu-- quite inseparable in an undivided India.

Jashn-e-Rekhta 2017, one of the world’s largest Urdu festivals recently concluded in India and I got in conversation with the founder of Rekhta Foundation and the force behind Jashn-e-Rekhta, Dr Sanjiv Saraf, as he welcomed Urdu lovers to celebrate the mystical language and its historic relevance in the Ganga-Yamuna region--India.

The objective of Rekhta is to highlight the secular character of Urdu and to promote and disseminate Urdu literature, to a global audience having roots in our sub-continent, particularly those not conversant with the script

He describes his love for Urdu as part of fond childhood memories, “I grew up with my father listening to ghazals in the house. But owing to studies and an inclination towards business, I didn't have enough time to learn or focus on Urdu. However, business gave me limited creative satisfaction and I started getting driven towards Urdu literature and poetry and eventually fell in love with the language.”

A successful businessman, Saraf took time and stepped back from business, to work towards his passion and focus his energy on learning Urdu.

This led him to discover that there wasn’t much available for those who were interested in the language. He says, “There wasn't enough content or resources available on the Internet and whatever existed was incomplete, non-credible and mostly in Urdu script. It struck me that there could be millions like me who love Urdu but do not have access to the content.”

He adds, “I then, felt the need to preserve, archive and digitise Urdu. In 2013, Rekhta Foundation was set up with the objective of promoting and disseminating Urdu literature, especially Urdu poetry to an audience beyond those conversant with the Urdu script.”

Birth of a language

As published in Handbook of Twentieth-Century Literatures of India, Omar Qureshi points that Urdu developed during the Delhi Sultanate in what is today—India and Pakistan—and flourished during the Mughal empire, especially in the military camp and marketplace in the environs of the Delhi Fort. The word ‘Urdu’ is of Turkish origin and refers to a military camp.

Despite this divide, grammar and indigenous words remain common in both languages.

Saraf asserts Urdu’s Indianness and says, “Undivided India was the birthplace of Urdu and many kings and nobles patronized the rich Urdu poetic traditions. Urdu poetry plays a significant part of our cultural memory and has been successful in opening itself to both revolutionary as well as romantic emotions. The language has always managed to inspire millions with its charm and lyrical beauty.”

Relevance of Urdu in India

Jashn-e-Rekhta 2017 brought together the best, to reflect on the timeless service of Urdu, in building of Indian art and culture. The poetic genius of multiple-award winners Gulzar and Javed Siddiqui were effective in transcending people to the world of dreams, Salman Akhtar elaborated upon the use of English vocabulary in Urdu poetry while Prof. Gopi Chand Narang talked about creative miracles of Amir Khusro and Urdu’s significance for the mass literary sensibility.

Dr. Rizvanul Haque, in the book, History of Urdu Literature and Its Impact on Indian Culture Modern Period, writes that Urdu has been on the frontrunner in triggering patriotic emotions. During freedom struggle, the slogan ‘Inquilab Zindabad’ (long live the revolution) was born out of Urdu, given by Hasrat Mohani.

In cinema, Urdu screenwriters wrote films and songs and the plot line was usually inspired by Urdu theatre and books.

Dedicating his life to Urdu, Saraf adds, “Ghalib’s poetry, even though is over a century old, is still quoted in our day-to-day lives.”

Is there anything of more credence than the fact that till date, we recite nazms written centuries before by laureates of yesterday?

Reclaiming what is ours

Rizvanul also writes that Urdu suffered the highest after partition, even after being on the driver’s seat during the Indian freedom movement. The language was looked at strangely, and it got surrounded with prejudices--a religious identity--rather than a geographical or cultural one.

Saraf on being questioned about dual identity, religion and love for Urdu, opens his heart out: “I have never really been criticised, rather have received tremendous support in furthering my efforts with Rekhta. Urdu is perceived as a language belonging to a certain section of the country, and with Rekhta--our aim is to take it back to the masses. Even though I do not have an educational background in Urdu, people appreciate the work that the foundation does.”

He adds, “Based on the demographics on our website, we find that over 70 per cent of visitors are in the age bracket of 18-35 years and the number is growing. This combined with the profile and enthusiasm; sheer number of attendees at Jashn-e-Rekhta was a sure sign of the interest that Urdu as a language and as a medium generates. In our perception, there is a resurgence of Urdu, especially among what is commonly known as, non-Urdu wallahs.”

He offers Rekhta as a one-stop solution for those who don’t have an initial education in Urdu. He continues, “Rekhta Foundation strives to preserve and promote the Urdu culture, the language and its various art-forms. A non-profit organisation, Rekhta operates a free online resource for Urdu poetry and literature, amassing a wide array of content from 13th century till present, in one place. It is available in Persian, Devnagari and Roman scripts.

“The Foundation also drives a massive effort for the digitisation of Urdu books including popular magazines and rare literature alike. The objective of Rekhta is to highlight the secular character of Urdu and to promote and disseminate Urdu literature, to a global audience having roots in our sub-continent, particularly those not conversant with the script.”

At the festival, they also launched a website ‘Aamozish’-- a fresh way to learn Urdu, that enables you to learn better with modules designed to show how words are formed, audio cues for proper pronunciation, while also tracking the learning progress in real time.

Saraf is happy with his work and adds, “I have dedicated my life to Rekhta.” Currently, modern Urdu is the national language of Pakistan and is spoken by millions of people in India.

You can check out more about Rekhta Foundation at www.rekhta.org. It is a free online resource for Urdu lovers.