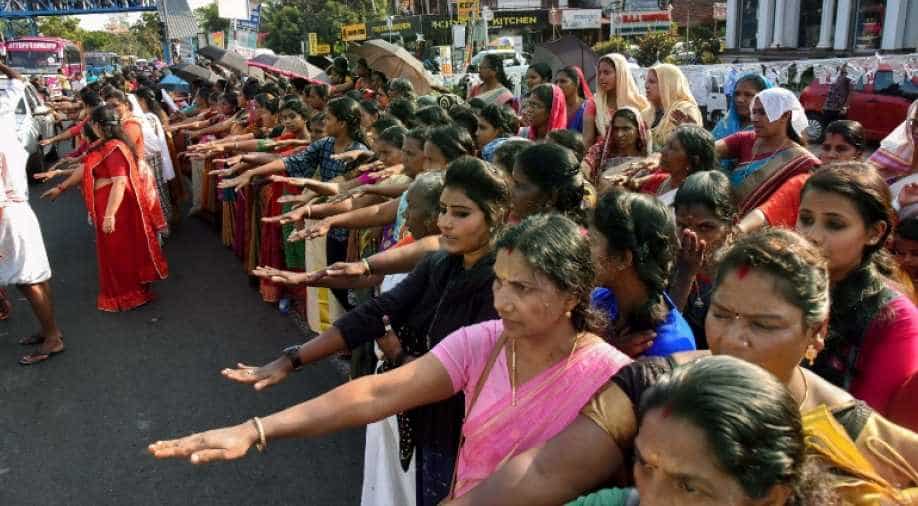 Thousands of women take pledge while participating in the 'women’s wall' against communalism and gender discrimination in Kerala. Photograph:(PTI)
Follow Us

The event comes days after thousands of devotees lit 'Ayyappa Jyothies' (lighting of sacred lamps) and lined up from Hosangadi in Kasargod to Kanyakumari, vowing to protect the age-old customs and traditions of Sabarimala.

In a first, lakhs of women stood should-to-shoulder across the national highways in Kerala, creating a 620 km-long human 'wall' from the northern end of Kasaragod to the southern tip here on Tuesday as part of a state-sponsored initiative to uphold gender equality.

The event comes days after thousands of devotees lit 'Ayyappa Jyothies' (lighting of sacred lamps) and lined up from Hosangadi in Kasargod to Kanyakumari, vowing to protect the age-old customs and traditions of Sabarimala.

On Tuesday, women from various walks of life -- writers, athletes, actors, politicians and techies, government officials and homemakers -- stood across the highways crisscrossing through the 14 districts in the state as the event commenced at 4 pm.

The 'Women's wall' was conceived in the backdrop of frenzied protests witnessed in the hill shrine of Lord Ayyappa at Sabarimala after the CPI(M)-led LDF government decided to implement the Supreme Court verdict, allowing all women to pray at the Ayyappa shrine.

The event is part of an initiative to protect secular values, gender equality and to spread a message against those trying to push society into the dark ages, organisers of the programme said.

Before the formal start of the event, Chief Minister Pinarayi Vijayan garlanded the statue of social reformer 'Ayyankali'.

Vijayan had earlier expressed confidence that women, cutting across lines of caste and religion, would join the 'wall' to save Kerala from being "dragged back into the era of darkness."

CPI(M) state secretary Kodiyeri Balakrishnan had earlier said that 50 lakh women were expected to take part in the event.

Health minister K K Shylaja led the 'Women's Wall' at Kasaragod and Karat was the last person at the end at Vellayambalam here.

School students were given half-day holiday, while universities postponed exams scheduled for Tuesday.

The government employees and Technopark employees were allegedly asked to take part in the event, which the main opposition Congress-led UDF dubbed "caste wall" and "wall of contradictions".

The participants began lining up at the designated centres since 3 pm. A rehearsal was also held.

The 'wall' was formed at 4 pm, with participants taking a pledge to uphold gender equality and renaissance values.

The campaign was suggested at a meeting called by the LDF government following massive protests by right-wing parties and a section of devotees over the government's decision to implement the September 28 apex court order, allowing women of all ages to offer prayers at Sabarimala.