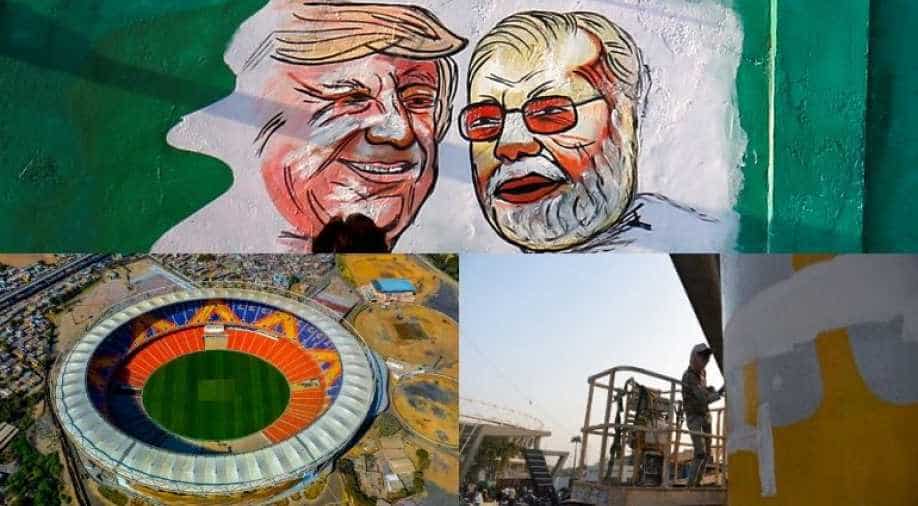 Trump's convoy route from the airport to the Taj Mahal is about 13 km and along the way thousands of artistes will welcome him with special performances.

Massive billboards greeting US President Donald Trump ahead of his India visit and reflecting the bonhomie between him and Prime Minister Narendra Modi have come up in Agra, which is on the itinerary of the American leader.

From streets near the airport to public squares in the vicinity of the Taj Mahal, the billboards have added to the air of excitement in Agra that is eagerly expecting the arrival of Trump, who will be in the city for a couple of hours.

Trump's convoy route from the airport to the Taj Mahal is about 13 km and along the way thousands of artistes will welcome him with special performances.

On the famous Mall Road, which falls on the route, one hoarding reads 'His Excellency Donald J Trump, President of the United States of America, Heartiest Welcome to the Land of Krishna'.

It is accompanied with an image of Trump standing next to Prime Minister Modi.

Another billboard features the two leaders shaking hands and bears the message 'Welcome to the Land of Holy Rivers Yamuna and Ganga'.

Yet another one on the route says 'Welcome to the Land of Rich Heritage of Art and Craft'.

Trump is slated to arrive in Agra on Monday evening after jointly attending with Modi the mega 'Namaste Trump' event at the newly built Motera cricket stadium in Ahmedabad earlier in the day.

The event has been named 'Namaste Trump' on the lines of the 'Howdy, Modi' programme organised in the US last year.

Trump's daughter Ivanka, son-in-law Jared Kushner and a galaxy of top US officials will be part of the high-level delegation accompanying him during his visit to India on February 24 and 25.

The Agra administration is all geared up for the big day and preparations are in full swing to present the 'best face of Agra'.

Outside the Agra Cantonment station at the Atal Chowk, a banner on Trump's visit also greets people arriving in the city.

In Agra, the Trump family will spend about an hour at the Taj Mahal before sunset. They will then leave for Delhi.

Another one says, 'His Excellency Donald J Trump, President of the United States of America', welcome to the land of immense opportunities for investment'.