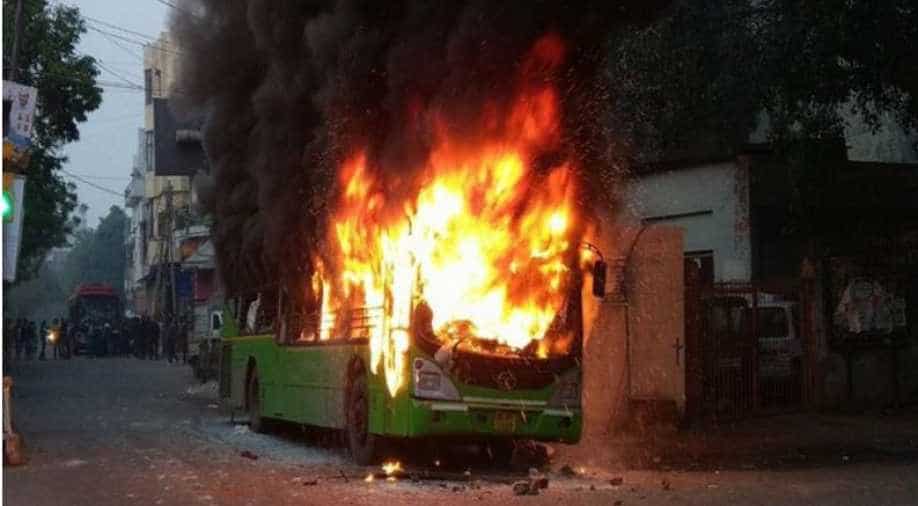 Huge plumes of smoke were seen billowing out of the buses as flames engulfed them. Photograph:( ANI )

Police have, meanwhile, taken control of the situation and fire tenders have been rushed to control the damage caused in different areas.

Huge plumes of smoke were seen billowing out of the buses as flames engulfed them.

Protestors also vandalised a fire tender that was sent to douse the fire and also injured two firemen inside the vehicle."One fire tender which was rushed to douse bus fire stopped and damaged by the students. Two firemen were also injured," said Delhi Fire Service (DFS), Director, Atul Garg.

Damage to other buses and vehicles was also caused by the protestors.

Police have, meanwhile, taken control of the situation and fire tenders have been rushed to control the damage caused in different areas.

Earlier today, protestors, including students of Jamia Milia Islamia University, had carried out demonstrations in the Kalindi Kunj area against the CAA.

The Delhi Traffic Police had closed the roads on which protests were being held in the national capital and kept on informing the public about the situation on the roads which were blocked by the protestors.

"Mathura Road opposite New Friends Colony both carriageways have been blocked by demonstrators," another tweet by the Traffic Police read.

Earlier, scores of students from the city's Jamia Millia Islamia staged a protest against the amended Citizenship Act on Saturday.

A day earlier on Friday, students protest left as many as 12 policemen injured.According to police, the protestors pelted stones at policemen who were deployed to control the situation.

The CAA seeks to grant Indian citizenship to refugees from Hindu, Sikh, Buddhist, Parsi and Christian communities fleeing religious persecution from Pakistan, Afghanistan, and Bangladesh and who entered India on or before December 31, 2014.